Pedro Nel Gómez didn’t idealize the human race. He admired it so much he painted it just as he saw it. Every six months, the Pedro Nel Gómez Museum in Medellín opens an exhibition highlighting an aspect of the famous Colombian artist’s work. In 2018 they premiered Nude, Manifest and Free with a group of local nudists. Towards the end of June they took down Master Plan - dedicated to Gómez’s urban designs-, and on August 27 the museum inaugurated Expeditions and Encounters to commemorate the painter’s 120 anniversary.

Pedro Nel Gómez didn’t idealize the human race. He admired it so much he painted it just as he saw it.

Every six months, the Pedro Nel Gómez Museum in Medellín opens an exhibition highlighting an aspect of the famous Colombian artist’s work. In 2018 they premiered Nude, Manifest and Freewith a group of local nudists. Towards the end of June they took down Master Plan - dedicated to Gómez’s urban designs-, and on August 27 the museum inaugurated Expeditions and Encounters to commemorate the painter’s 120 anniversary. 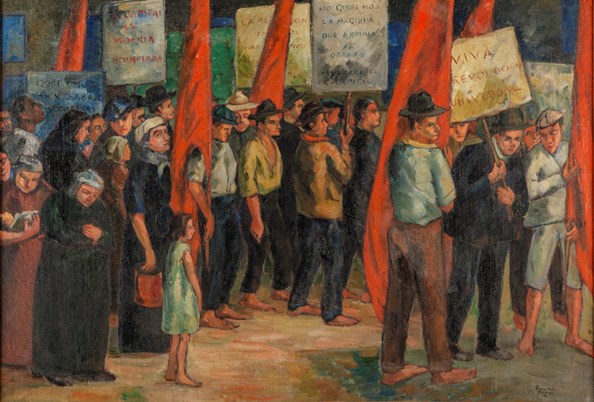 Pedro Nel Gómez, Testament of a Nation, from an exhibition at Colombia's National Museum

The latter narrates the voyages Pedro Nel (1899) made throughout his life. In the 1920s he explored Europe and studied art in Florence. In 1930 he moved back to Colombia and began to tour the country, and in the mid-1950s he traveled to Mexico and met the country’s most prominent muralists.

Expeditions and Encounterscenters on how these worlds impacted the artist and his work. In Italy, for example, he marveled at the Renaissance’ purity of form. “His work from the period is preciously drawn, color is carefully applied, and the human form is well painted,” says Álvaro Morales director of the museum.

As you walk the show and see the different people and landscapes he painted, you realize Gómez truly saw the world around him. “I don’t choose the type of men and women who appear in my paintings. I take them from reality,” he said.

That’s why upon returning to Colombia his style changes. He felt his home country’s essence couldn’t be reflected through Italy’s Renaissance aesthetics. “He sees these copper colored Indians, these ebony black men and women, and these mulattos that we are, and he breaks the preciousness of his strokes. He decomposes forms and his figures become cheeky, muscular, short, flat-nosed. He achieves them by painting just a few strong lines. His color palette changes, and tends towards ochre tones, earth colors, and the greens of the jungle,” says Morales. 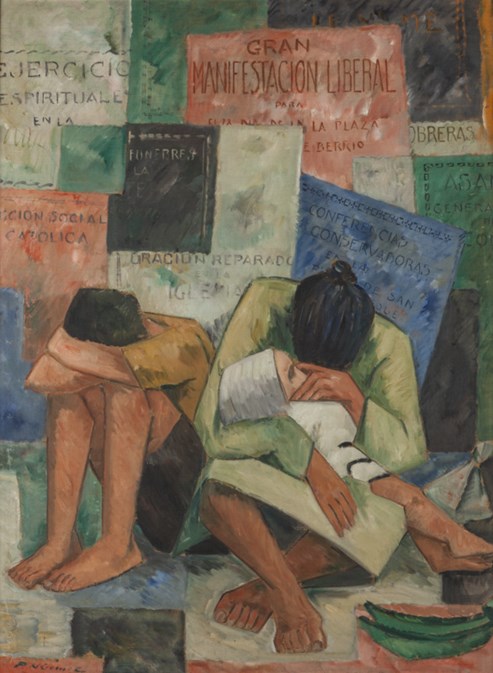 Pedro Nel Gómez depicted the Colombian people. He made multiple paintings of artisanal miners at work. He drew them naked to highlight the enormous physical effort of their labor. In Exodo campesino (The Exodus of Peasants) he paints the anguish of a mother holding her son as she runs from the home they’re forced to leave; in La familia en la esquina de una ciudad (1945)(A Family on a Street Corner) the women’s bodies show the helplessness of the homeless; and in the various canvases that speak of renown politician Luis Carlos Galán’s murder he portrayed Colombia’s haunting violence.

Gómez’ art isn’t a socialist propaganda. It’s the work of a man amazed by our human condition and all that it entails. That’s precisely why he paints reality.

“…looking at them, looking at myself, painter of old women, of children and of the elderly, singer of the women who fight and exalter of the poor, broken and hopeless people, I ask myself, in an instant of vanity, if humanity is so adorable or if I have too much heart. And I opt for the second,” he said.

By showing the viewer what he sees around him, Pedro Nel invites him or her to explore the world, to remain constantly surprised by life and to respect it. “The thousand and one maternity themes in my works... are a call to the country to reflect on life and its rights,” he said.

The Pedro Nel Gómez Museum is located in a low-income neighborhood of Medellín. “During the time of the drug cartels and the peak of urban violence, this part of town was marginalized,” says Morales. In 2006 the museum resumed its work and its renovation plan consisted on opening its doors to the community. “People wanted a space they could use,” says Morales.

“Today we have 54 groups from Medellín’s fourth district, which come to the museum to do different cultural activities: an elderly group does gymnastics, an evangelical one meets in our exhibition rooms, others have set up a film club, some come to Arabic or Tango dance lessons. All groups are called Pedro Nel Gómez. Around here everything is called Pedro Nel Gómez, even the local TV channel,” says Morales. “They’ve made the artist and its legacy their own.”

“I knew I wanted to stay when an old woman of African descent, who lived near the museum, looked at one of Pedro Nel’s murals and said: these people look like me,” says Morales. “I replied: Yes, ma’am, it’s you.”