Uwe Goldenstein, curator and founder of the Berlin-based gallery and network SELECTED ARTISTS: “Probably there was a lack of melancholy in museums and that’s the reason for the success.”

“Melancholy was quite an important theme till the ‘90s, but then we witnessed the crisis of this deep feeling, probably for the lack of time. Being rushed and melancholic at the same time is not very easily possible,” says Uwe Goldenstein, curator and founder of the Berlin-based gallery and network SELECTED ARTISTS.

The success of his recent 4000m² large exhibition Preparing For Darkness at Kühlhaus Berlin, seems however to indicate the art world’s desire for more melancholy. “Probably there was a lack of melancholy in museums and that’s the reason for the success.”

The show, which took the title from a 2015 work by Attila Szűcs depicting three giant soldiers standing eerily in a Metropolis-like city, was envisaged to create a sense of space and time. Indeed the aim was to allow visitors to consider the concept of an end, its possible manifestations and ramifications.

“Many people have this feeling, many people see the end around the corner. But normally the media celebrate it, rather than giving the instruments to make the spectator feel it. With art you have the time to go through it. That’s why visitors remained stuck.”

Visitors took their time in front of the work The Morning (2015) by Alexander Zakharov showing a moose doll lying hopelessly on the floor, surrounded by snow and dead leaves. The stuffed animal, in tune with the poem Melancholy by Samuel Taylor Coleridge, has the same meditative value, with an added ironic perspective: humans can feel empathy for a toy, but can have issues sharing emotions with other humans.

Many Berliners appreciated this ironic melancholy as much as the technical skill Gregor Gaida showed in his sculptures of maple wood where key elements of the body are covered in black fiberboard and acrylic glass. Likewise, the exhibition hinged on a classical figurative language reinterpreted from a contemporary perspective. Craftsmanship, melancholy and dystopian realities were the three main pillars.

“I always have an art history perspective on contemporary art. Nicola Samorì is somewhat of a god for many artists. He should be the most expensive painter or artist in the world. But it is not the case, this is art market, this is completely different. I mean the Pope had words on Samorì, and this is a great marketing tool, but he is unique because he studies art history every day for two hours. Every single day. He is a guy from the past, living now. He does super contemporary things, because he shows us this relationship is destroyed. You can never recognise the complete motif in his work, there is no direct contact to art history but in the same time it’s pure art history,” Goldenstein who worked as lecturer of art history in Bremen for over two years, explained. 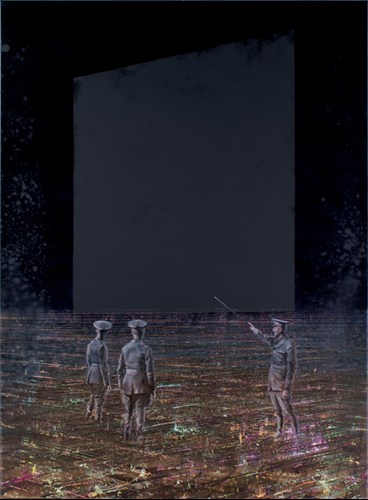 The Art World: “Museums Are at the End of the Art Market Chain”, says Goldenstein

The exhibition, which is available online in a 3D video using groundbreaking technology, has met both supporters and detractors. Some people in the art world said it was trivial and somehow self-explanatory, others appreciated it for the critical, even political message conveyed through the wide range of works, mainly paintings, spanning from pop works to more introspective pieces.

“The combination of technical skill and a melancholic view of the world is something difficult to find. The origins of the artists I selected probably had something to do with it. Their work is deep, and reflects a complicated political and social situation whilst valuing technical skills, rather than a glorification of the commercial side of the art world as happens nowadays in many academies. In many art schools in the west, students are not really well educated, for instance in terms of art history. That’s probably why I go to the east, and out of Germany, maybe.”

Over 140 pieces were in display throughout five floors. Out of 33 artists, five came from Hungary, three from Italy, three from Russia, two from the Czech Republic, two from Romania, one from Moldova, one from Poland, and one from Ukraine. In other words, almost half came from Eastern Europe.

“I didn’t just present stars like Nicola Samorì. I also presented some unknown or younger artists. The selection was based on my taste and on my view. Considering my generation, we have 350,000 artists in Europe. I scanned those I liked the most, and I found them in Hungary, Romania, Italy mostly. And Russia too.”

If it is true that global art sales grew 12% in 2017 after two years of falling sales, as reported in a study by UBS and Art Basel in March, the market has not recovered across all sectors. According to the report, the top end of the market led the gains, with just 1% of artists whose works were offered at auctions representing around two-thirds of the total auction sales. The middle tier is still suffering.

“The biggest problem is that you see the same contemporary artists all the time, especially at the museums. Our world is bigger and more subtle than this.”