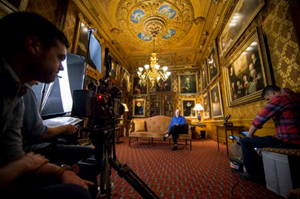 Sotheby’s Museum Network, to launch August 29 2016, will be a digital hub for creative content produced by leading public and private institutions around the world. Inaugural Series - The Treasures of Chatsworth – is currently in production and will debut in Autumn 2016.

Sotheby’s Museum Network, to launch August 29 2016, will be a digital hub for creative content produced by leading public and private institutions around the world. Inaugural Series - The Treasures of Chatsworth – is currently in production and will debut in Autumn 2016.

Sotheby's is delighted to announce the launch of an online destination to discover video content created by and about the world's leading museums. The digital hub will be called Sotheby’s Museum Network and it will be featured prominently on Sothebys.com as well as Sotheby’s Apple TV channel. The museums in this network will include internationally-renowned public institutions, such as the Metropolitan Museum of Art, Tate, and the National Palace Museum in Taiwan as well as well as newer institutions founded by private collectors, including the Garage Museum of Contemporary Art in Moscow.

In addition to syndicating museums' own content, the Sotheby’s Museum Network will also be the home of original programming conceived and produced by Sotheby’s. The Treasures of Chatsworth, a 13-part series on one of Europe’s greatest private houses and most significant art collections, is currently in production and will debut this autumn. Further information will be shared in the coming months.

Recent years have seen the opening of numerous private museums by passionate patrons, as well as record attendance at major exhibitions worldwide, reflecting a seemingly insatiable public interest in great art and collections. Sotheby’s Museum Network will reach a global audience for whom museums and foundations are a new entry point into the world of art, as well as seasoned collectors and connoisseurs who look upon these institutions as the ultimate source of authority on art and culture. It will ultimately encompass thousands of existing museum videos, which have never before been aggregated into one channel, making it easier for people to discover what they love as well as introducing new audiences to the great work that these institutions are creating worldwide.

“We are thrilled to host the extraordinary videos produced by our museum partners around the world," commented David Goodman, Executive Vice President, Digital Development & Marketing. “The Museum Network is a response to a growing global audience that wants to experience the world of art and collecting. The network is a natural evolution of the existing ties we have with museums through programs like Sotheby’s Preferred and we can now deepen those relationships with institutions and their benefactors as we expose their outstanding collections to millions of art lovers who engage via digital channels. The Treasures of Chatsworth is the perfect way to launch our drive into original video content creation centered on the arts and will be the first of many original films that will reveal the wonder of art and collecting.”

Image above: Behind the scenes: filming The Treasures of Chatsworth with The Duke of Devonshire