Street Art to the Gallery: Interview with Revolue (Antipop), Brazil 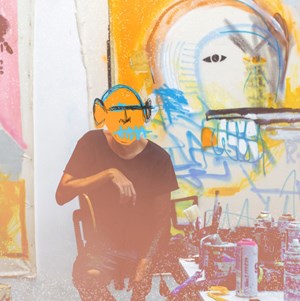 "Graffiti is something to have fun with, but it also has a serious message. That’s why I don’t consider myself a graffiti artist anymore. For me, real graffiti artists are on the streets every day, tagging all around, sending messages...I like to observe, to hang with street artists. I truly respect them. My main goal is always to make people think - think about themselves, think about the city with a funny or sarcastic taste. In the end, its art, and for me, art is all about happiness".

Revolue grew up in the middle of inks, papers, pens and many scribbles on his house walls.

Adept of a minimalist lifestyle, the artist carries more than 10 years of experience in research and artistic development. 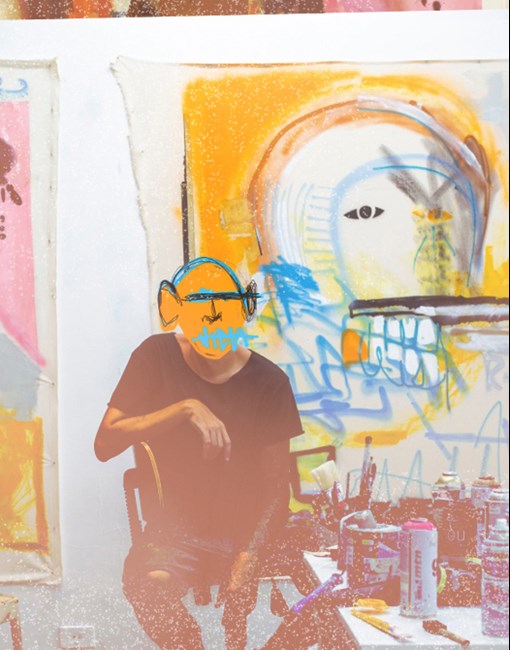 From urban art to contemporary studies, looking for not settling on one style, prefers to keep open to the experiment. In baggage, always the underground reference and the concept of “luxury from the rubbish” to add to his remarks, which also involves the chaotic human behavior.

Part of a “intuitive – expressive” creative process and reaching the image of a face, for him, everything is represented in our face -It’s the only thing that shows our personality, experiences and true feelings.

ArtDependence Magazine met Revolue during the Kyiv Art Week and talked about the impact of the street in contemporary art.

ArtDependence (AD): Revolue, tell us about yourself and your connection with street art. How did it all start? Is it true that you started off as a graffiti artist?

Revolue (R): It all started with the streets of São Paulo. The city is really huge and there’s a lot of traffic on the streets. Since I was young, I remember being in the back seat while my father driving his car and I was just observing the walls. I still have this habit of observing the walls and the tags everywhere I go. One day I just decided to go out on the streets and make something. I met some other friends who used to make stickers, and together we started doing tags, graffiti and all kinds of urban art.

AD: In most cases, graffiti is a rebellious gesture against society. What was your main point, who were you appealing to with your messages?

R: Graffiti is something to have fun with, but it also has a serious message. That’s why I don’t consider myself a graffiti artist anymore. For me, real graffiti artists are on the streets every day, tagging all around, sending messages...I like to observe, to hang with street artists. I truly respect them. My main goal is always to make people think - think about themselves, think about the city with a funny or sarcastic taste :) In the end, its art, and for me, art is all about happiness.

AD: Do you consider yourself a rebel, a revolutionary?

R: Yes, that’s why I choose Revolue as my nickname. I’m always looking for something new, trying to understand people’s behaviour and question myself about what we have to do in this world. Everybody says that we only live once, but they still have jobs that they don’t enjoy so that they can buy stuff and they think that life is just for the weekend. There’s a huuuuuge new world in front of us and we have to use it right. We all should be revolutionaries.

AD: How did you become a gallery-based artist?

AD: Tell us about your upcoming public show in Vienna?

R: This will be my first time in Vienna, so my gallerists, Lais Pamplona had the idea to invite me to something a bit different. The show is going to be in a theatre in Baden (which is close to Vienna) and the works will be presented on stage. The idea is to bring the audience up on the stage so that they can feel it from a different point of view.

The audience are part of the show and around them will be 13 new works.

The show is called “Bodies not Included”, which means that I’ll do even more exploring of the faces which are the basis of my creations. I want to show what’s behind our face…there’s feeling behind it - emotions, thoughts, sights. I’ll bring it to the front. I’ll do my best to give everyone a really good night that is a lot of fun and that explores real art.

AD: Regardless of the fact that it is a controversial concept, street art could be viewed as a tool to increase the attractiveness of the city among tourists and locals. What do you think about this?

R: I don’t consider street art a tool. I consider it PART of the city. It’s not something that you can design or plan. Right now, while you read this, there’s someone in EVERY urban city doing something on the streets. It can be a young boy or an old Sir. There’s something happening 24/7 in a natural and organic way.

AD: How should public art be inserted into urban spaces?

R: With no judgements or “special curation” or selection. There’s always space for art and people make it complicated.

AD: What is the path for a street artist to become a collected artist?

R: That’s the second million-dollar question. In my opinion, there’s no path or any set rules. Everybody is different, so it will happen in a different way for each artist.

If you want to be an artist, be that artist every day, night and minute of your life. Find a way to survive by doing your art and be the artist all the time. Feel it with all your heart. It’s art or nothing.

AD: What are your sources of inspiration?

R: Everything! Of course my main inspiration is always people’s behaviour, but I get inspired by everything that does not include other artists. The best advice that I could give is to stop looking at other artists and get inspired by your life - your feelings. In my case, I love to observe chefs cooking, cars in traffic, fashion, photography, black and white stuff and minimalism.

AD: Tell us about the techniques you use in your works?

R: As a contemporary artist I think that I have to explore all kinds of techniques, so I go from street art to fine art techniques. I like to use oil paintings, spray, charcoal, regular pens, brushes, pastels. I like to experiment. You can see it in my works. It’s always full of different mediums that create my own style and technique.

AD: Would you like to experiment more or have you invented your own unique style and decided to stick with it?

R: We can never stop anything. If we stop we are dead. We have to be open to the new - that’s why we are here - to experiment, to bring something new to the universe. We have to create, explore, test, make mistakes… we have to live and life is about movement.