The Director of Artissima, Ilaria Bonacossa, speaks to Sofia Evangelou for Artdependence 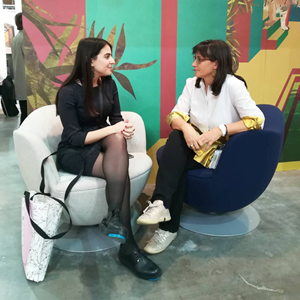 Artissima 2017 was a spectacle, a happening, a unique experience for all stakeholders – the artists, the gallerists, the visitors – everyone. It was in this most special context that I had the great pleasure and unique privilege to interview the mastermind behind all this, none other than the new director of the leading Italian art fair, Ilaria Bonacossa.

Artissima 2017 was a spectacle, a happening, a unique experience for all stakeholders – the artists, the gallerists, the visitors – everyone.

It was in this most special context that I had the great pleasure and unique privilege to interview the mastermind behind all this, none other than the new director of the leading Italian art fair, Ilaria Bonacossa. Ilaria has an outstanding curriculum and a distinguished career; she has been an eminent figure in the artistic scene of Italy, holding a number of key positions since 2003. Our discussion was interesting and dynamic focusing on the fair and the city of Turin which she considers a core component of the fair. As she explains, you cannot have one without the other. They are complementary and indivisible.

The first words of Ilaria were the following, “With so many art fairs in the world if you do not have a specific reason to exist, there is no reason to exist”. Artissima is an art fair for true art lovers that know its role not only in the city, but also in the Italian and international art system. The 24th edition of the fair focuses on the 80s. It is trying to rediscover this decade, which is so diverse and complex, trough the project ‘Back to the Future’, with special emphasis on the female artists. As Ilaria highlights, “in a way, the 70’s have become mainstream, so the fair wanted to rediscover the 80’s that are so close and so far at the same time”.

In line with the identity of the fair, there is a reason why the fair is happening in the city of Turin, where Arte Povera was born, and this year completes its 50th anniversary. In Ilaria’s words “Turin it’s in a phase of transition again, working hard the last fifteen years towards the direction of becoming a city for art and culture and it’s kind of really happens”. But now the city has also to think about the next step. In order to do so, the city this year is launching a new project, which is like a “working table” where all the art institutions, including the fair, and all the artistically active people of the city discussing the future of the contemporary art system. Last time that this happened was in 2011, and of course since then many things have changed in the meanwhile. In this context, Ilaria emphasizes the importance of new arrivals such as the internet and the online buying, which have transformed completely the art landscape within the last years. As she underlines, the so-called ‘digital transformation has changed so much the physical relation with the art world’ - it transforms the way you view, experience and buy art; it could be a game-changer.

Moreover, Artissima’s relationship with music is also very strong. Ilaria suggests that “the lines between art and music are becoming thinner and thinner and that Artissima traditionally has a strong connection with music”. Indeed, the fair this year had the brilliant idea of ‘Piper. Learning at the discotheque’, creating a real club inside the fair, but also collaborating with the international festival of electronic music Club to Club. The fair also collaborates for the first time with with the film festival TGLFF of Torino, the oldest gay film festival in Europe – organized by the National Museum of Cinema. The LGBT and the feminist themes were powerful in Artissima, but in a harmonious way, that did not overshadow all the other crucial pillars of the show.

In general, there is “an effort to spread out like a net into the city”’, becoming an excellent place to work and create. In addition, next year marks the 25th anniversary of Artissima, another good timing for Ilaria Bonacossa and the fair, providing a great opportunity to celebrate this major landmark and explore new ways to develop Artissima in the future.

Ilaria also commented on the impact that the art fair phenomenon has in the art market today: “many galleries are in a crisis and art fairs are doing really well. But this is a problematic situation because if the galleries are in crisis the fairs cannot do really well. So, I think is the time art fair to interrogate itself. The system should rethink the way it operates”. On the other hand, she notes that “the application for an art fair has something very democratic and allows new comers to become part of the game”.

Lastly, she pointed out that the introduction of the new drawing section of the fair, ‘Disegni’, which “was a test” that worked unexpectedly well, greatly appreciated by collectors and gallerists alike.

All in all, Artisssima and Turin are in a phase of rediscovering again their identity, as well as their goal and role in the art ecosystem. Many things have been achieved, great landmarks conquered, but also, as the Director and the Fair look into the future, the quest for new horizons, is only beginning.