The Essential Duchamp to Tour Japan, Korea, and Australia in 2018-2019 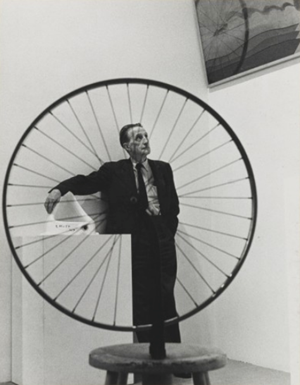 Most comprehensive exhibition on Marcel Duchamp to be presented in Asia commemorates the 50th anniversary of the artist’s death.

The Philadelphia Museum of Art is organizing the most comprehensive exhibition dedicated to the art and life of Marcel Duchamp ever to be seen in the Asia-Pacific region. From October 2 to December 9, 2018, The Essential Duchamp will be presented at Tokyo National Museum in Japan before traveling to the National Museum of Modern and Contemporary Art in Seoul, Korea, and the Art Gallery of New South Wales in Sydney, Australia. This exhibition will include about one hundred and fifty works and related documentary materials spanning the artist’s six-decade career. They will be drawn from the Philadelphia Museum of Art’s definitive collection of works by Duchamp, as well as its incomparable library and archival holdings relating to the artist. This major exhibition will offer a rich and engaging account of the fascinating life and influential work of one of the 20th century’s most original artistic figures. The opening of The Essential Duchamp in Tokyo will also mark the 50th anniversary of the artist’s death. The international tour is made possible by the Terra Foundation for American Art.
The exhibition will include important early works that have never traveled to Japan, Korea, or Australia, including Portrait of Dr. Dumouchel (1910), Sonata (1911), and Chocolate Grinder (No. 2) (1914), along with many other key works, among them Nude Descending a Staircase (No. 2) (1912). This was the painting that made Duchamp’s name when it was exhibited at the epochal Armory Show in New York in 1913 and it will be seen in Korea and Australia for the first time in The Essential Duchamp.

The exhibition will offer a chronological account of Duchamp’s life and art. The first section explores the period from 1902 through 1912, when he experimented with different avant-garde styles ranging from Impressionism to Symbolism and Fauvism. It concludes with his highly original engagement with Cubism and his life-changing decision at the age of twenty-five to abandon the painter’s craft and seek new ways of working. The second section examines the crucial interval between 1912 and 1917, when Duchamp pushed past the boundaries of painting as conventionally understood. It was during these years that he generated the ideas for his magnum opus, The Bride Stripped Bare by Her Bachelors, Even (also known as The Large Glass) (1915-23), and then embarked upon its construction after moving to New York. At the same time, Duchamp also created the first of his so-called readymades. Functional objects, such as his infamous sculpture Fountain (1917), were divorced from their utilitarian purpose and designated—as opposed to made—by Duchamp as works of art. The third section follows Duchamp in Paris during the decades of the 1920s and 1930s, then back to New York as an émigré during World War II. The last section explores the remaining decades of his life when Duchamp achieved legendary status in the art world. It reflects upon themes that had long preoccupied Duchamp, including the erotic as a doctrine, and the aesthetics of realism and illusion. The exhibition concludes with materials illuminating the production of his final work, a three-dimensional construction built around a life-sized mannequin of a female nude, Étant donnés.