The Experiment at Plato Continues

Plato gallery in Ostrava (CZ) is growing bigger with another two extensive functional facilities, created by artists commissioned by the city gallery for the former Bauhaus hobby market. On Wednesday 19 September the artist’s cloakroom designed by Klára Hosnedlová and the first presentation structure (display) by Wesley Meuris from Belgium will be inaugurated.

The Experiment at PLATO Continues. An Artist’s Cloakroom as a Fashion Boutique and a Presentation Space with 1,200 Litres of Water.

PLATO gallery in Ostrava (CZ) is growing bigger with another two extensive functional facilities, created by artists commissioned by the city gallery for the former Bauhaus hobby market. On Wednesday 19 September the artist’s cloakroom designed by Klára Hosnedlová and the first presentation structure (display) by Wesley Meuris from Belgium will be inaugurated. The decorative-conceptual element will consist of paintings and textiles owned by the City of Ostrava. Since last April, gallery visitors can successively follow an unusual experiment – the birth of a new institution “in direct”.

Visitors can follow the gradual and unprecedented building up of the Ostrava city gallery since April 2018, when the institution launched its activities in a former hobby market with an area of more than 5,000 m2. Its zones and interior elements are functional, and at the same time artworks. The third stage of the Temporary Structures series is the opening of a cloakroom and presentation structure (display). They follow up the garden, library with reading room, bistro and bookshop, created by an international group of curators and artists and met with an excellent response.

The cloakroom is a work of Klára Hosnedlová, a graduate from the Prague Academy of Fine Arts (2015). She has turned the cloakroom into Studio Oléne, which is not merely a place to deposit clothes and a practical passing place from the street inwards, toward the experience itself. “Its ambition is to draw the attention to our own bodies, to give the visitors a chance and time to deal with themselves on different levels,” explains Marek Pokorný, director of PLATO and at the same time curator of the exhibition project. The huge cloakroom with an area of 50 m2 has a special floor and hanging system; a wall built especially for it will become a single-work gallery.

The next of the new temporary structures is covered by the name “Display”. “In English, the word “display” stands not only for the computer screen, but is also used for “posting”, “exhibiting” works of art as well as products. Actually, PLATO’s goal is not to merely present artefacts made by artists, but specifically to research possible forms and contexts of exhibiting.

Wesley Meuris is the first of the four artists to create a display for PLATO. The installation of this Belgian artist expresses “how our behaviour and perception of the environment are influenced by the architecture of institutions such as museums, zoological gardens, archives, and perhaps even swimming pool changing rooms,“ says Michal Novotný, Display curator, when characterising the work of Wesley Meuris.

The core of his new work for PLATO, titled Liquid Octagone, is an octagonal water tank with a diameter of 2.6 meters, which can hold as much as 1,200 litres of water. Around the fixed “pool” there are objects that can be used for sitting and displaced according to what will happen in the zone – a sculpture exhibition, lecture, or perhaps yoga. “I believe that the work could provoke others to deal with it, without the installation losing its own autonomy,” says Wesley Meuris. “The subject of Meuris’ monumental installation are primarily the visitors themselves,” concludes the curator. 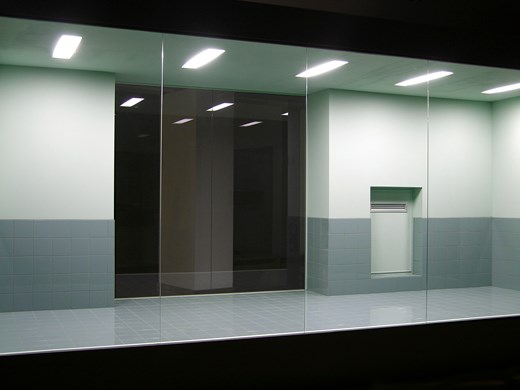 PLATO’s functional facilities are now complemented by a set of artworks loaned by their owner, the City of Ostrava, in the role of “decoration” of the space. The second edition of the Concept_Decor cycle presents several examples of different period aesthetics. The works of twelve artists, acquired to decorate offices and public rooms of the city hall, will replace the works of Jindřich Chalupecký Award Laureates from the Magnus Art collection. Speaking about the second Decor cycle, curator Marek Pokorný says: “In the context of a gallery for contemporary art, a revisionist approach to a set of artworks owned by the city represents, among other things, an attempt to remind of the possible images of the city (past and future).” The exhibited set includes works by Vilém Wünsche, Věra Tošenovská or Jiří Surůvka.

On the occasion of the opening of Temporary Structures 3, the Garden of the Future will be supplemented with other art objects by Matyáš Chochola, the author of its basic concept and Jindřich Chalupecký Award Laureate for 2016.