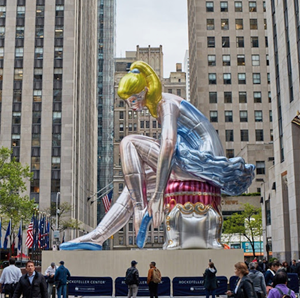 2017 was a year of shocking revelations, hot debate and giant price tags in the art world. As the wider world adjusted to new political forces and challenged the secretive culture of male power structures, the art world was asking its own questions around ownership, originality and patriarchy. Here are the top 10 stories that shaped the arts industry this year.

2017 was a year of shocking revelations, hot debate and giant price tags in the art world. As the wider world adjusted to new political forces and challenged the secretive culture of male power structures, the art world was asking its own questions around ownership, originality and patriarchy.

Here are the top 10 stories that shaped the arts industry this year:

Jeff Koons’ much-lauded ‘Seated Ballerina’ sculpture at Rockefeller Centre in New York was found to bear a striking resemblance to a porcelain sculpture by Ukrainian artist Oksana Zhnikrup. Shortly after the resemblance was revealed, Koons’ team confirmed that they had purchased a license for use of the work, but that they had not named the source or inspiration in publicity around the piece.

On November 15th 2017, all auction records were smashed when Leonardo da Vinci’s Salvator Mundi, a painting of Jesus thought to have been commissioned by King Louis XII sold at auction in New York for $450.3m. The painting was entered into the Post-War and Contemporary Art Evening sale, rather than the Old Masters sale, in what proved to be a genius PR move by the auction house. In early December, it was revealed that the purchaser was Saudi prince Bader bin Mohammed bin Farhan al-Saud and that the painting would be displayed at the Louvre Abu Dhabi.

Venice was calling for Damien Hirst this year as he staged his first major solo show in Italy since 2004. For the first time ever, a single artist took over a spectacular 5,000 square meters of museum space at both the Palazzo Grassi and the Punta della Dogana. The gigantic exhibition, titled “Treasures from the Wreck of the Unbelievable” received mixed reviews and was said to be ‘jaw-dropping and hyperbolic’.

There were said to be audible gasps from the crowd when Jean-Michel Basquiat’s 1982 painting joined the $100Million plus club in May. The incredible sale cemented Basquiat’s reputation as one of the world’s leading contemporary artists. The piece was purchased by Japanese billionaire Yusaku Maezawa.

Pope Francis appointed Italian art historian Barbara Jatta as the first woman in history to take on the post of Director of the Vatican Museum. Jatta took up the new position on January 1st this year. Jatta had previously worked for the Vatican since 1996. Under her new posting, she has taken responsibility for Michelangelo’s Sistine Chapel, Giotto’s Stefaneschi Triptych and Raphael’s Madonna of Foligno.

The 221-pound gold coin was known as the Big Maple Leaf, and was stolen from the Bode Museum in Berlin on March 27th. Burglars entered the museum through a side window using a ladder suspended on railway tracks before taking the coin in a wheelbarrow to a nearby parked car. Police have suggested that the theft may be an inside job. They have also stated that it is likely the coin has been melted down.

As the wider world absorbed the revelations that film studio executive Harvey Weinstein had abused his power in order to sexually assault women, the art world was busy pointing the finger too. In early November, Benjamin Genocchio, Executive Director of the Armory Show, was stepped down from his position following a wave of accusations of sexual harassment, many relating to his time at Artnet.

Following further accusations against Knight Landesman, co-publisher of Artforum, 150 artists, curators and museum directors joined together to write a letter openly denouncing sexual harassment and abuses of power in the art world. The letter claimed that the accusations of abuse of power came as “no surprise” and stated that Landesman’s resignation did not solve “the larger, more insidious problem: an art world that upholds inherited power structures at the cost of ethical behaviour.”

German artist Kurt Schwitters’ final Merzbau project in the Cumbrian hills is under threat due to lack of funding. The current owners have been trying their best to look after the space, but have faced funding cuts and financial strain.

Qatar continues to demonstrate its rich contemporary art scene with a grand finale show to end the Qatar-Germany Year of Culture. The show, titled Contemporary Art – Qatar, is being held in Kraftwerk, a former industrial plant that is often used as a techno music venue. This will be the largest showcase of Qatari art so far and will aim to nurture and showcase young talent.