UNESCO Celebrates US Handover of 3,500-year-old Gilgamesh Tablet to Iraq 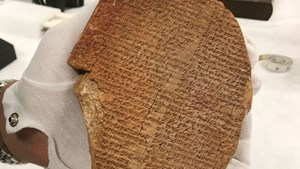 UNESCO will celebrate a significant victory in the fight against the illicit trafficking of cultural objects when one of the oldest literary works in history is formally handed back to Iraq by the United States of America at a ceremony at the Smithsonian Institution in Washington DC.

UNESCO will celebrate a significant victory in the fight against the illicit trafficking of cultural objects when one of the oldest literary works in history is formally handed back to Iraq by the United States of America at a ceremony at the Smithsonian Institution in Washington DC this Thursday, September 23rd. In addition to this exceptional piece, in July, the US Government facilitated the voluntary repatriation of 17,000 artefacts to Iraq which were discovered to have been looted in recent decades.

The “Gilgamesh Tablet”, also known as the “Gilgamesh Dream Tablet”, is believed to have been looted from a museum in Iraq following the conflict in that country in 1991. In 2007 it was fraudulently introduced into the US art market and in 2019, it was seized by the US Department of Justice.

The restitution of this valuable artefact is the culmination of decades of cooperation between states such as the United States and Iraq who are both signatories of UNESCO’s 1970 Convention, which provides countries with the legal and practical framework to prevent illicit trafficking, and to ensure that recovered items are returned to their rightful place. 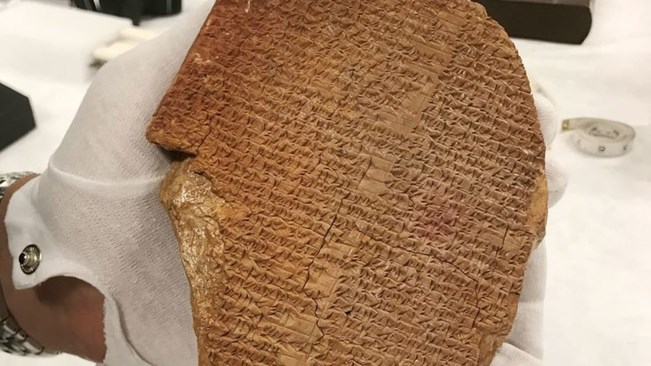 The Gilgamesh Tablet’s return also symbolizes the wider international mobilization, both by countries and organisations such as UNESCO, to prevent and tackle the illicit trade in ancient artefacts.

The theft and illicit trafficking of ancient artefacts continues to be a key funding source for terrorist groups and other organised criminal organisations.

According to Interpol, there has been a considerable global increase in the destruction of cultural heritage due to armed conflict over the past decade.

The authorities in the United States, which is a key stakeholder, representing an estimated 44% of the global art market, have made significant progress in recent years. With the help of an improved legislative framework and the assistance of key cultural institutions, the US Antiquities Trafficking Unit has, in 2021 alone, helped return valuable items to the people of Pakistan, Cambodia, Thailand, Nepal and Sri Lanka.

Made of clay, the Gilgamesh Tablet includes inscriptions in Sumerian, a civilisation of ancient Mesopotamia. It features sections of a Sumerian poem from the “epic of Gilgamesh”, which form parts of epic stories mirrored by the Old Testament, making it one of the world’s oldest known religious texts.

UNESCO has, in recent months, been supporting the Iraq National Museum in its efforts to carry out inventory and research work to help safeguard and promote the museum’s invaluable collection.