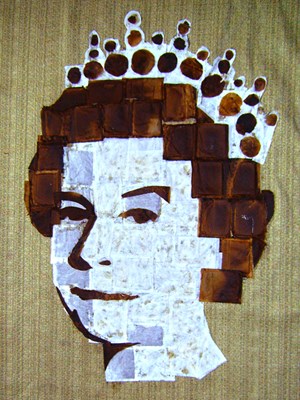 In reading about little-known facts in art, ArtDependence Magazine came across a very interesting artist: Andy Brown. Brown found notoriety when he created a portrait of Queen Elizabeth II by stitching together 1,000 used tea bags. ArtDependence reached out to Andy Brown with questions about this particular work, which Brown was more than happy to answer.

In reading about little-known facts in art, ArtDependence Magazine came across a very interesting artist: Andy Brown. Brown found notoriety when he created a portrait of Queen Elizabeth II by stitching together 1,000 used tea bags. ArtDependence reached out to Andy Brown with questions about this particular work, which Brown was more than happy to answer.

ArtDependence Magazine: What inspired your fascination with the Monarchy?

Andy Brown: Growing up in the UK, and maybe particularly within my family, the royal family felt ever-present. My grandparents drank tea from mugs with portraits of the Queen and Prince Philip on them, and every royal occasion felt like a big event where we were. From postage stamps to money to television and newspapers, where fields battles were fought to pub names ‘The King’s Head' etc., we are surrounded by images and history relating to the monarchy in the UK, and it’s very much part of us, whether we like it or not. I have felt this even more in the past 10 years, since I have lived abroad in Korea. Mixing with others from different cultures makes you understand more what it means to others and to yourself to be British. It is very much something that others see you as being part of - however remotely the case. 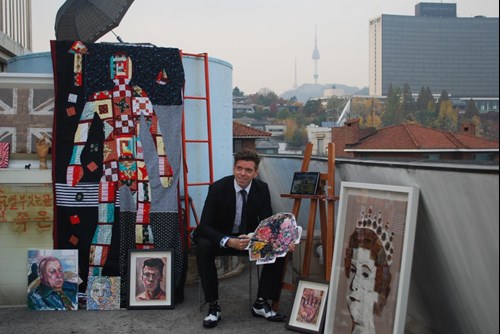 AD: How did you devise the idea of portraying the Queen in teabags?

AB: When I first starting making the tea pieces, I was working with pictures from the Falklands War. I was very young during that conflict, but images from it seemed to be ever-present in the UK in the 1980’s. I started using tea like water color to paint the iconic moments of the war in washes of sepia tones. Within that series, I went through to images of Diego Maradona and his 'hand of god' moment and then the Queen. The next logical step seemed to be to make images from the actual tea bags themselves. The Queen seemed to be the universal icon and symbol which related to all of this and much more, encapsulating a whole nation’s history and future.

AD: How long did it take to make this portrait?

AB: The first tea bag piece was stapled to a wall in my studio. It was a quick sketch really, to try out the medium and find its limitations. It worked well, so I decided to stitch the tea bags on to hessian. They were sewn on to represent the delicate nature and fragility of icons and monarchy. It also was a nice metaphor for the threads which hold us together in making up this symbol that we are related to.  It took a long time to complete - over 3 weeks. I used over 1,000 tea bags. Some were used, some unused and some were spilt and the tea leaves were taken out. 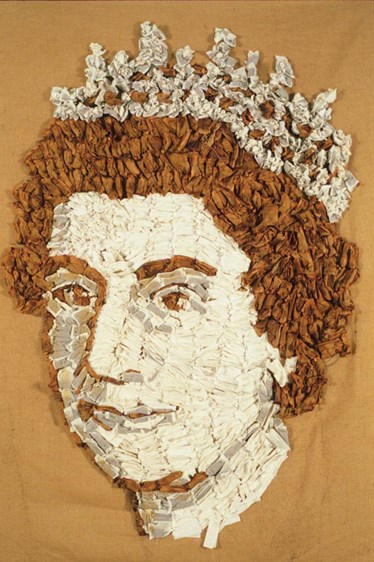 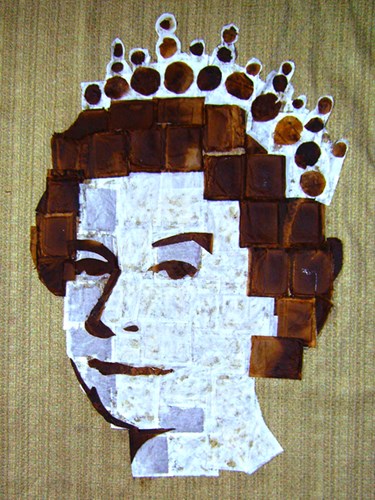 AD: Is it easy to preserve this work with factors of humidity, etc.?

AB: There have never been any issues with preserving the work. The used tea bags were fully dried before they were used. The original pieces are nearly 20 years old and are still in fine condition.

AD: Did you expect all the recognition that followed from this portrait?

AB: No, not at all. Initially it was not quite what I had imagined, and I was not sure what to make of it. But I have learned this is often a good sign of making breakthroughs in one’s work. Reasonably quickly, I could see it was good, and when people started seeing it, their reaction was more and more positive. It seemed to have something to it, which captured that time, but it also seems to still hold something all these years on. I still did not expect what happened later with many press articles, interviews, a letter from Buckingham Palace, appearances on BBC television and radio, and a question about me in the board game Trivial Pursuit. Making this piece, and what it has given continues to be a wonderful experience. It is great to have felt that appreciation from others and the knowledge that it had something to it which people enjoyed. 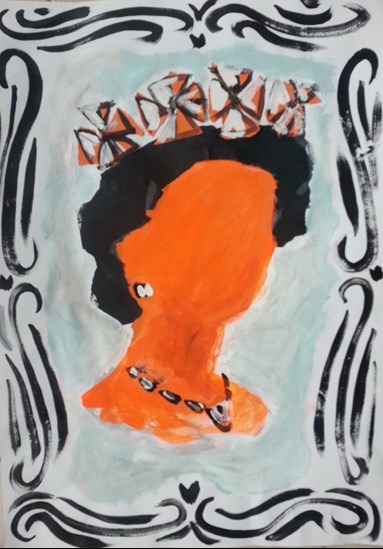 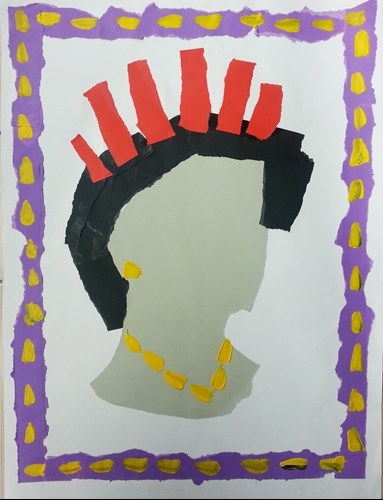 AD: Is this portrait one of a series?

AB: I have completed a few Queens now made from tea bags, I guess 10-15, which are located all around the world. In the past few years, I decided I will complete one per year for as long as HM is on the throne. Then maybe I will start with the next King or Queen, we shall see. I also have completed other images of the queen made from paper, and collages which were recently exhibited, along with the tea bag pieces, here in South Korea. 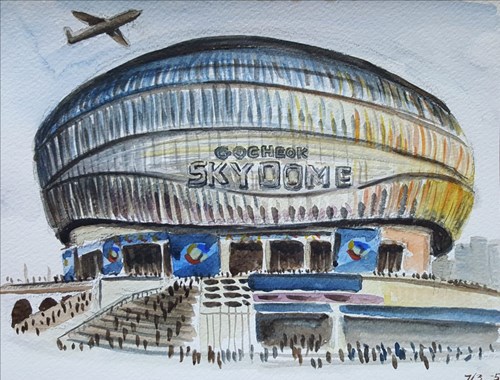 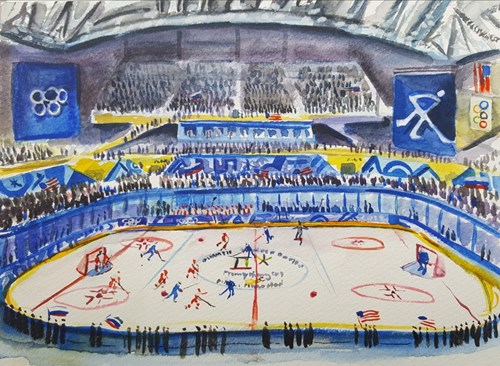 AD: What projects are you working on now, and what do you have planned such as works, exhibitions, etc.?

AB: Along with exhibiting the Queen pieces, I travel and paint sport and sports stadiums a lot nowadays.

To me, sport is a unique way in which to see a country and its people, and a way to see a country’s history, architecturally, economically, socially, etc. I mostly document baseball, a game I have come to understand living in Korea. I find it a great subject matter as it is not part of my heritage, so feels so exotic and different. It is also very theatrical and full of drama and icons - Kings, Queens, heroes and villains. I have exhibited some of these works here in Korea, but am now looking for other galleries and exhibition spaces in which to exhibit these works further afield.