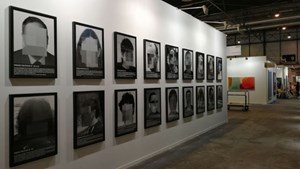 IFEMA has issued the following statements regarding the withdrawal of work by artist Santiago Sierra, which ARCOmadrid fair director Carlos Urroz does not support.

IFEMA has issued the following statements regarding the withdrawal of work by artist Santiago Sierra, which ARCOmadrid fair director Carlos Urroz does not support:

IFEMA has requested the gallery Helga de Alvear to withdraw the work of the artist Santiago Sierra, which they have agreed to do.

The trade fair institution, which has full respect for freedom of expression, believes that the media controversy caused by the exhibition of these pieces is harming the visibility of ARCOmadrid 2018’s content as a whole, and it is therefore its responsibility, as the organizer, to try to distance the fair from discussion that might distract from the event.

With ARCOmadrid, IFEMA is pursuing the establishment of a globally-relevant commercial fair with the goal of encouraging collecting, and its priority is to guarantee a return on the investment and effort being made by participating galleries.

IFEMA’s objective is to set up, in gallery format, a commercial platform containing knowledge of the highest international level, which is able to represent the vitality and dynamism of contemporary art, as well as encourage the promotion of public and private collecting.

With these consistent aims, it is our intention to commit to the continued building of a Contemporary Art Fair in Madrid, that represents the spirit of those who take part in it: galleries, artists, organizations from the art world, collectors and in short, everyone who forms part of the universe of cultural creation.

Therefore, in view of the unrest that has come about in this edition of the fair, it is in IFEMA’s utmost interest to point out that, in accordance with the rules that the developmentof the ARCO fair operates under, the only competent body in the assessment of its content is its Organizing Committee, an authority in which we reassert ourselves.

In this regard, we regret and sincerely apologize for the controversy that has occurred as a result of the request to a gallery for the removal of a work, which in no case sought to enforce any censorship of the creation, even though this was the public perception. This action was carried out in good faith, and we accept the criticism received, and appreciate that any future circumstances of this nature should be avoided.

Image on top: Santiago Sierra, “Political Prisoners in Contemporary Spain” (2018) on view at the Helga de Alvear booth during the installation of Madrid’s ARCO art fair (courtesy the artist and Helga de Alvear)