Art Against the Virus

Belgian artist Yves Velter creates uniquely recognisable works of art that have captured the public imagination. Focusing on the outlines and shapes of his subjects rather than the distinctive details, he manages to capture something of the essence or the feeling of a scene.

Belgian artist Yves Velter creates uniquely recognisable works of art that have captured the public imagination. Focusing on the outlines and shapes of his subjects rather than the distinctive details, he manages to capture something of the essence or the feeling of a scene.

Here, Yves tells us a little about the way he works, and the impact that coronavirus is having on his ability to work.

ArtDependence (AD): Can you tell us a bit about your work?

I have a persistent curiosity about the phenomenon of ‘man’. It started* with a fascination about the human condition in our current society. In my universe the figures are capable of making contact with each other and their surroundings but they are also locked up inside themselves, therefore acquiring something impenetrable and unfathomable. There is a mystery about them, but also a sense of estrangement, often inclining towards the ‘unheimlich’.

I often use black silhouettes of human figures against a lightly tinted background that seems to intensify the isolation. Traces of individuality have disappeared. Moreover, the emphasis is put on the compromising pose or action of the isolated figures, I am trying to confront the viewer with the physical body as a shell or container, in which contradictory reasonings, feelings and emotions, desires and fears are stored. The result is a work of art not as a solution to the asked question (usually the title is the entry point) but a starting point for a discussion. The language I use consists of two components: a figurative component and a cryptical one. In the cryptical one I make use of an array of symbols (now 25 in total) that each have a meaning so you almost can “read the picture”. It helps to define the story in an interpretative way without damaging its magic.

La réponse, courtesy to the artist

*My first professional solo exhibition was titled “Serendipity” in Royal Museum of Fine Arts in Oostende, B in 1997.

AD: Many critics have commented that you seem to be looking for the “Onoplosbare Vraag” (Unsolvable question).  What does this means to you?

YV: The greater part of my work tackles unsolvable questions, usually psychological, philosophical and social issues. Art is not a science (science has the need to work with conventions and proof-systems). It is a discipline that has the potential to open doors to unsolvable themes. Art makes complex topics debatable and brings them up for discussion. The human being has a basic need to communicate. My images try to make it clear that real communication is precious and rare.

For example: The human as an ambiguous being, full of contradictions, varying states of mind, desires and fears. The ‘I’ has many faces, you can think that you know somebody, and then you see that person making contact with someone else and suddenly you get to see a totally different aspect of him/her.This entanglement of ‘personae’ contained within the human being, and the complex search for the fruitful relationship of the ‘I’ with ‘The Other’ are issues that concern me time and again.

AD: Your approach is very philosophical/psychological. Do your insights change over time and are you getting closer to what you are looking for?

YV: I see in this question a multi-layered answer. On the one hand there is the continuous growth of the perception of life infused by knowledge, experience, conscience, passion, social changes… this gives a feeling of maturity and a grasp on life itself and at the same time, the more questions are answered, the more new questions come up. One important and gratifying constellation is that the big picture is clear. The fun part is now as we begin to put the details of the big puzzle in place. It is not a necessity but a playful activity with limitless sidetracks and alterations.

AD: Is the period we are in now, the COVID-19 period, of influence in your work? Does this period strengthen your work given its depth?

YV: In many ways the psychological themes in my work are reinforced by the corona pandemic. Practically everybody is confronted with his/herself in an intense, long-lasting manner. It is a unique moment in time (maybe it’s never going to happen again) for introspection. At the same time we are all interconnected through the net and so we can share these experiences through blogs, artcles, social media, art… 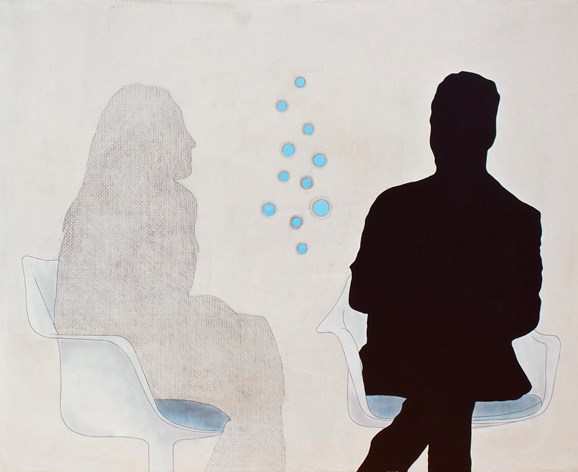 The stage act, courtesy to the artist

More than a month ago, when the quarantine started, it struck me that some symbols gave an intuitive feeling of visually connecting with- and resembling the virus. For example the red dots that symbolize fear and longing also look like a mist of particles floating trough the air. At the same time the virus has such an effect that it is capable of dislocating society, and through fear it creates physical and social distancing, exactly the thing we long for. Realising that, I started to post daily images related to this theme. The project is called “Art against the virus”. Through this corona crisis an unexpected door opened to a new audience.

AD:Given the current situation I suppose many activities are on hold.  How do you deal with it, and what have you got planned?

YV: At first it looks like a tragedy. So many projects have been cancelled, a few have a chance of being put on at a later date, but undeniably uncertainty and disappointment is prominent. On another level it is a unique time, I am still healthy and once the acceptance of the situation has set in (and that was easier than I thought, because everyone is in the same situation), the stress levels go down a lot and there is a possibility to see this period as an opportunity, as there is so much time to read, to prepare new work, to talk with your partner, to recalibrate in so many ways. The feeling I have at this moment is that when projects are going to restart, there will be a valuable calm mindset because of the previous preparation time and a new appreciation for what we have.