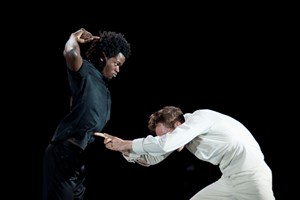 Continu is a piece that was developed in 2010 as a continuation of two site specific works created at the Neuen Museum in Berlin by David Chipperfield and at MAXXI in Rome by Zaha Hahid. From the dialogue between the two architectonically influenced works, was generated Continu, also strongly inspired by architectonic forms and lines.

Continu is a piece that was developed in 2010 as a continuation of two site specific works created at the Neuen Museum in Berlin by David Chipperfield and at MAXXI in Rome by Zaha Hahid. From the dialogue between the two architectonically influenced works, was generated Continu, also strongly inspired by architectonic forms and lines.

The piece begins with music by Iannis Xenakis (1922-2001) played live by the energetic Robyn Schulkowsky while a group of female performers dance simultaneously the same phrases while underline their breasts with geometrical movements. As wild creatures using an intimate and secret vocabulary between them and kept undisclosed to the witnesses, they seem possessed by magical energies and bewitching powers. 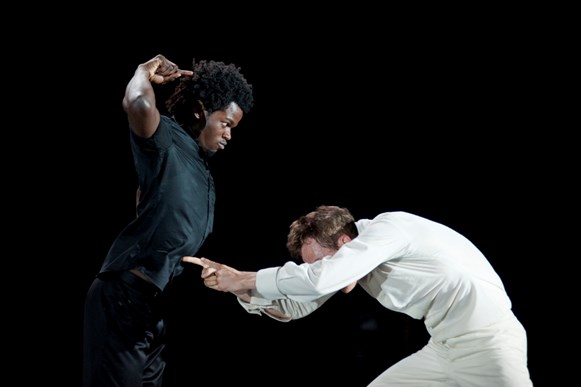 A large ensemble of frantic dancers enters the stage and invades it with fear and anxiety moving frenetic, fast and furious. As threatened by an upcoming calamity, intimidated by the powerful Arcana by Edgard Varèse, they try to hide themselves within the group, running towards the corners of the black quadrated stage looking for safety. They move as terrified while they try to survive the given situation confronting in fast duets and getting together in groups as they would support each other.

The music goes on with Hyperprism and Ionisation also by Varèse to whom’s compositions Waltz felt strongly attracted since she heard Amériques with the Ensemble Modern conducted by Pierre Boulez. Claude Vivier and Wolfgang Amadeus Mozart are also part of the music choices, navigating from burst to delicacy. 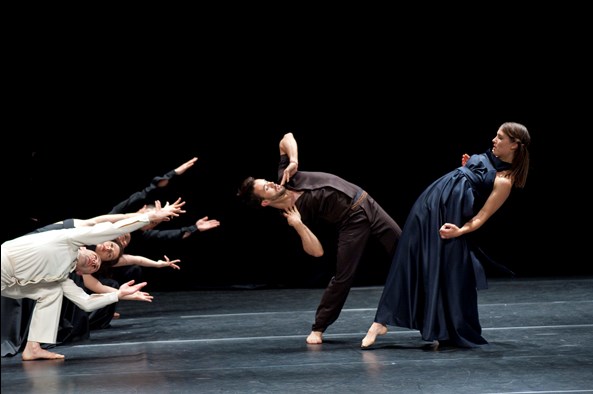 In the hectic scenario there are bodies who seem stronger then others, as leaders in a demo that can be assaulted any minute and therefore explode. In a volcanic scenario there are moments that move from minimal shifts to strong expansions and the quantity of information is often too dense leading to an oppressive feeling.

The second part, way shorter then the first one, is based on a danced painting made out of scribbles under the feet; those are generated by rounded movements on a white large canvas first used purely as a dance floor, then as a platform to transfer motions into colour. 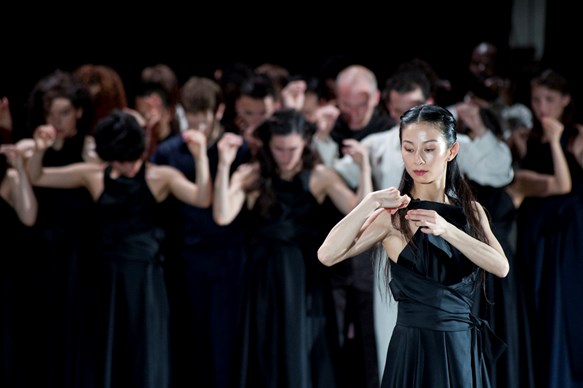 Waltz says: the piece deals with the theme of driving forces, of desire, of raw, uninhibited emotion in contrast to mental distance or control. This is already in two parts of the piece, the black part, in which it is about anchoring with the earth, the instincts and the desire. The white part is the spiritual part where you can look at yourself from a certain distance.

This duality is intriguing and very much part of the complexity of the humankind divided by carnal desires contrasting with the rational side. Struggling to keep forms linear in an unsetting spectrum of turbulence and discomfort, the dancers prove their capacity to deal with edgy and tensed movements but most of the times, neither emotions nor expressions are involved or perhaps are secretly kept unveiled.

The different silhouettes of the performers are emphasised by the elegant outfits created by Bernd Skodzig that are contrasting with the raw nature of the piece. Once again, probably linked to the idea of the aforementioned dualism, instinct versus control, explosion versus form.

The unexpected and beautiful ending, with the lift of the massive painted floor-canvas by one of the dancers, suddenly swallowed by it, has a strong resonance as it could bring the audience with him, in an unknown territory, where is not given to know what kind of experience will be lived.