Distant Matter by Van Dijk &Half Life by Eyal 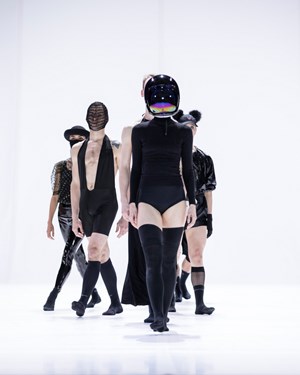 Distant Matter by Anouk van Dijk premiered at the Komische Oper Berlin is a piece that raises several interrogatives. It opens up with a catwalk resembling a fashion show. Seven performers with futuristic/queer features cross the stage front and back, one by one, showing attitude and self confidence. The outfits are all in black although very eclectic. The most peculiar one is the lady with a black body and stretched shirt, black socks arriving over the knees and a motorbike helmet that reflects what surrounds her.

Distant Matter by Anouk van Dijk premiered at the Komische Oper Berlin is a piece that raises several interrogatives. It opens up with a catwalk resembling a fashion show. Seven performers with futuristic/queer features cross the stage front and back, one by one, showing attitude and self confidence. The outfits are all in black although very eclectic. The most peculiar one is the lady with a black body and stretched shirt, black socks arriving over the knees and a motorbike helmet that reflects what surrounds her. The others, rather quite original, are conform to the contemporary Berlin party clothing.

Once aligned to the back they look at the audience as they would wait for a signal to begin the next motions. On the music by Jethro Woodward they start moving vertically and horizontally on the big white roll that hangs at the back. Following precisely invisible lines they start running, then chasing and in some cases, grabbing each other. 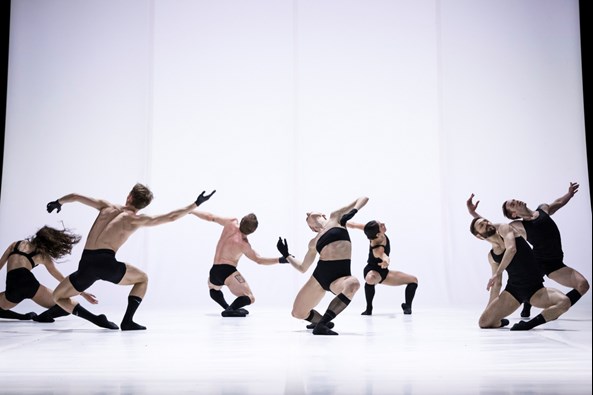 The performers look like people that being at a fetish party find them selves, all of a sudden, in a sterile, over lighted and observed environment. They still behave as they were in a party-play set but at times they seem realising they are looked at and possibly judged for their odd behaviours. Beside the captivating interaction between two that appears quite resistant and at the same time sensual, the movements in general are quite even. Accurate dancers generate neat and well performed phrases but since the complexity of the core is lacking, it does not leave remarkable traces.

The performance seems wanting to stage a phenomenon to which, even if desired, it is not possible to escape; such as the tendency and direction of the time we live in. 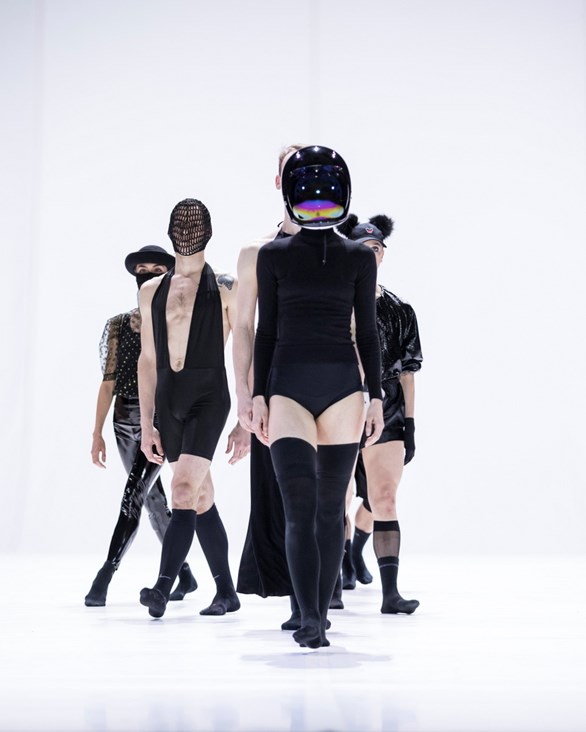 The interactive participation between the dancers combines a sense of induced and lived passivity that could be a pleasure as a strain. The same is created in the phenomenon of the social tissue where it seems that the human being is incapable of extrapolating from certain dynamics and remaining trapped, adapts himself to the dominant tendencies. How susceptible and easily influenced are we?

In a constant metamorphosis it is impossible to identify what is happening as it is visible in the performance that, full of constant and overlapped movements, makes impossible the full comprehension of the diverse dynamics going on. The Distant Matter is influenced by the mechanical physics teaching us that observing a phenomenon there will be an impact influencing the outcome. This triggers reflection on the ripple effect that everyone of us has experienced and that in its obscure and mysterious way is as fascinating as disquieting.

Premiered last September, Eyal’s Half Life is still particularly impressive. The strength and resistance of the ensemble is outstanding, in particular the endless entrechats quatre by Daniel Norgreen-Jensen who seems to jump without gravity force. The whole group is extraordinary in their accurate and unsettling compact composition generating organic forms that cannot be defined but can be seen. Highly rhythmic and well shaped, the structure of the group is always framed within an absorbing magma produced by the sculptured performers moving really close to each other, yet still fiery and independently. 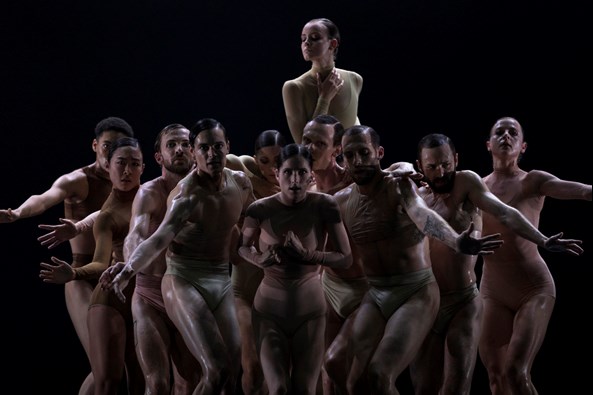 Entering in a sort of robotic scenario although very much fluid, it is possible to perceive a duality; on one side the elaborated and detailed mechanics of the body appearing almost unnatural, on the other the sensuous, captivating and corporeal radiation of this inexorable corp de dance. As a thaumaturgist, Eyal transformed the dancer of the Staatsballett Berlin in a group of fearless and at the same time graceful soldiers that keep marching to a common value that this time seems to be a good one, something that brings solidarity, hope and that fight for a constructive and peaceful prospect.