Ecce Homo in Antwerp: Empowering Women Through the Work of Male Artists? 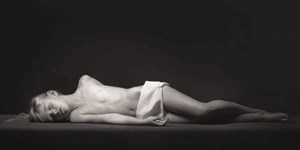 Internationally, the art world is well aware that it has a problem with under-representation of female artists, but it seems the jury is still very much out when it comes to addressing that problem. A study by the Hertie School of Governance in Berlin recently looked at this problem in the German context, finding that women comprised 48% of the cultural workforce in Germany, but held only 21% of the top management positions. Most alarmingly, two thirds of those studying arts and humanities subjects at Universities were female. Clearly there is no lack of desire amongst the female population to engage with the art world. So where is it all going wrong?

Internationally, the art world is well aware that it has a problem with under-representation of female artists, but it seems the jury is still very much out when it comes to addressing that problem. A study by the Hertie School of Governance in Berlin recently looked at this problem in the German context, finding that women comprised 48% of the cultural workforce in Germany, but held only 21% of the top management positions. Most alarmingly, two thirds of those studying arts and humanities subjects at Universities were female. Clearly there is no lack of desire amongst the female population to engage with the art world. So where is it all going wrong?

In Belgium this month there was a wave of excitement as the ‘Ecce Homo’ project was unveiled by the team behind the UN-SCR-1324 exhibition. That show had included an all female line-up and had provided a much-needed platform for female artists. As the details of Ecce Homo emerged, it was clear that this was a very different scenario. This time, just 17 out of the 63 artists on display are female.

The project’s aim is to explore the classical theme of humanity and the human condition as represented in Belgian Art. The organisers are keen to use the show as a platform to explore human development and to actively contribute to humanitarian work. They are donating part of the proceeds from the show towards Human Rights Watch, with a specific focus on funding projects which promote children’s and women’s rights. They state that “choosing to support children’s and women’s rights has been a matter of great personal concern to us for many years. Subsequently, we want to create awareness of the necessity of girl’s and women’s empowerment worldwide and support an organisation such as Human Rights Watch in any way we can.”

So what can we expect from the exhibition? And why are there so few female artists on display? We caught up with Ecce Homo representative Lien Craps to find out more about the show and the selection process.

AD: What was the inspiration for the Ecce Homo exhibition?

Lien Craps: ECCE HOMO started several years ago in the minds of art historians Yasmine Geukens & Marie-Paule De Vil. It was first envisioned as a small group exhibition but evolved today into a grand event that takes place in several locations around the city of Antwerp.

In 2008, Geukens & De Vil  organized UN-SCR-1324, (the only resolution by the UN dealing with women in conflict areas), an exhibition that included only female artists. The expo started in their gallery in Antwerp and later found its way to the Chelsea Art Museum in New York. Ecce Homo can be considered as a sequel to this exhibition.

Additionally, this exhibition aims to extend the art historical concept of ‘Ecce Homo’ (a concept of which the meaning is often forgotten by the public at large due to secularizing in the Western world) to our current era, an era in which humanity and mankind are violated on many different levels. Increasingly, we are confronted by essential differences in the development and freedom of humankind in various parts of the world. Ecce Homo shows how contemporary artists approach “la condition humaine” in today’s world.

AD: How did you select the artists to be included in the exhibition?

LC: The curatorial team, which included Geukens & De Vil, Marion de Cannière & Eric Rinckhout, had many meetings debating which artists would suit this show and concept. There were no restrictions regarding gender, origin, age, disciplines etc.

The only requirement was that the artist is alive (an exception is being made for Philippe Vandenbergh) and is working or living in Belgium. We started with a long list, which became a short list of 20 artists and then again built up to a long list of 63 artists.

AD: Why do you think the theme 'Ecce Homo' is particularly important at this moment in history?

LC: Isn’t it important at any moment in history? It is always important to reflect on the contemporary ‘condition humaine'. That being said, we do feel it that these are ‘roaring’ times.

This is an exhibition about the condition of human beings and the way artists approach human beings at this point in history. Have you seen any common themes in the work?

Yes. It is very interesting to see how all of the artists have dealt with the question of creating work around ‘Humanity today’. Only one artist (Fred Bervoets who is also the oldest artist in the exhibition) made a work around the universal theme of being lovesick. Only 2 artists created work about climate change (Gideon Kiefer and Peter de Cupere). Themes that were very present included: migration, refugees, war, inequality, Africa, the woman, transitory living or primeval nature and many more.

Part of the proceeds of this exhibition will be donated to Human Rights Watch to protect the rights of women and children, and yet only 17 of 63 artists on display are female. Was it harder to find female artists to display?

Yes, we are VERY conscious about this fact! We tried to raise this number but did not succeed. We didn’t want to add female artists ‘just' for the sake of adding them, but we feel it really is a shame we could not get to an equal number of female and male artists.

Do you think art institutions have an obligation to explore social issues and contribute to current debate?

Yes - isn’t this peculiar to art? Art has the ability to point out what is happening in the world today. When observing art, you are always able to observe a certain ‘zeitgeist', even from completely different artists in different parts of the world.

Additionally, Art can make a difference and has a voice. That’s why we are working with Human Rights Watch! Subsequently, yes, it is the job of museums and institutions to contribute to the current debate.