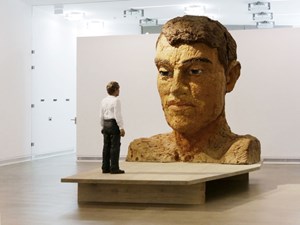 Stephan Balkenhol, renowned for his wooden sculptures and carved out of wood art pieces, is a German artist also working in other fields, like photography and drawing.

Stephan Balkenhol is a German artist renowned for his sculptures: art pieces carved from wood with a wide range in size and form. A graduate from the Academy of Fine Arts in Hamburg, Balkenhol doesn’t look for the extraordinary in life, but sees and captures the basics in people; it is almost as if all of us are dissolved into his sculptures, only to be reinvented as someone else, unique and ordinary at the same time. Balkenhol’s commitment to simplified medieval carving techniques has allowed the artist to become a master of the imperfect. This style, perfectly imperfect, is also perhaps how we could describe a generalized view on humanity. His works, which also involve the use of other techniques like photography and drawing, are found in numerous collections worldwide, as well as being included in major art fairs. In this interview with Artdependence Magazine, Stephan Balkenhol provides insight into his outlook on the existing reality of his craft, how his work is perceived (and ranked), plus a little taste on his future plans.

Artdependence Magazine: In one of the interviews you said that each artist wants to create something new to add to existing reality, something that is missing in it. What do you add to the existing world. How can you define your "input"?

Stephan Balkenhol: Figurative sculpture is often misused as a bearer of messages. In my vision my sculptures become a question, a mirror. And it is the viewer who fills it with meaning. Astonishingly enough, many beholders can hardly bear this “openness”. Both myself and my sculptures do need this element of tension, this mystery.

AD: Your early works were mostly nudes, now you dress them in clothes. What has changed your approach?

SB: It is true, my very first figures were naked. But as I noticed that people usually walk around dressed I naturally started to dress my figures as well. But there is still both in my oeuvre – in the same way that we can be both dressed and undressed. Being naked is part of the „conditio humana“ as is being dressed.

AD: Apart from this you are quite consistent in your artwork. You don't like to experiment?

SB: For more than thirty years there has been the common thread of the nature of human beings and the struggle about the human figure in my work. Without exeperimenting, without risking things this is simply not possible. This might be the constant you are alluding to. However, and here I absolutely agree with you, I try not to only scratch the surface of things but to profoundly explore my topics in all their complexity.

AD: Sculpture plays the main role in your oeuvre. But sometimes your practices also include drawing and photography. Please tell us when and how you use them?

SB: Drawing is a very direct and immediate medium. It only needs very few lines to tell a great story. You can turn the whole world upside down, let cows fly and phrase something unspeakable. Both drawing and photography have accompanied my work for all the years. Often they are studies for sculptures or conceptual conciderations. But they do not necessarily end up in a sculpture. In the last years I did quite a few woodcut drawings – something one could say on the verge between drawing and sculpture.

AD: Your work does not reflect any particular person, but is a compounded reflection of many characters. In a way, you collect features of different persons and combine in one sculpture so that they lose their identity and become impersonal, characterless. What does the idea of simplifications and generalization mean to you?

AB: Actually it is the other way round. It is not about combining characters or creating hybrid creatures without any identity. For me it is important to create a figure that on the one hand has got an expression and a specific nature but on the other hand it has to be open and ambiguous. It would be wrong to call it a generalisation through reduction. It is rather an agglomeration – also in a poetic sense. In that way the figures can become a projection surface for their complex and contradictory human counterpart.

AD: You are ranked No 177 on Artfacts now. Does this indicator mean anything to you?

AB: Of course I am glad about success and recognition. But at the same time I know that I am always only as good as my next sculpture.

AD: You have a long list of exhibitions all over the world in different venues. Which one did stick the most to your memory so far? And what are your future plans?

SB: There are some exhibitions that have been particularly important for my work due to the significance and size of the respective institution, as well as the feedback that followed (i.e. Kunsthalle Basel 1988, Hirshhornmuseum Washington 1995, Deichtorhallen 2008/09 und Musée de Grenoble 2010/11). But basically I understand every exhibition as a new challenge. In 2015 I am looking forward to two museum exhibitions, one taking place in Düren together with Jeff Wall, the other one being a solo exhibition in the Moscow museum of Modern Art (Palais Gogolevski).

AD: Dear Stephan Balkenhol, thank you for the interview and all the best in your artwork!

Portrait of Stephan Balkenhol, 2014
Foto: Henrik Hornung
By Anna Savitskaya
Anna is a graduate of Moscow’s Photo Academy, with a previous background in intellectual property rights. In 2012 she founded the company Perspectiva Art, dealing in art consultancy, curatorship, and the coordination of exhibitions. During the bilateral year between Russia and The Netherlands in 2013, Perspectiva Art organized a tour for a Dutch artist across Russia, as well as putting together several exhibitions in the Netherlands, curated by Anna. Since October 2014, Anna has taken an active role in the development and management of ArtDependence Magazine. Anna interviews curators and artists, in addition to reviewing books and events, and collaborating with museums and art fairs.