“I have learnt that it is essential to always keep an open mind and never become dogmatic,” Hendrik Driessen, De Pont 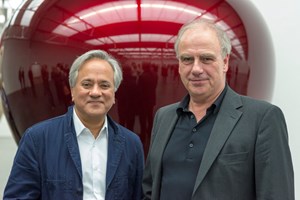 This September, Museum De Pont in Tilburg, Holland, will celebrate its 25th anniversary. The museum first opened its doors in 1992 thanks to the generous support of Dutch businessman and attorney J.H. De Pont (1915-1987). The founder had decided that part of his estate was to be used to stimulate contemporary art, but left it up to the board of the new foundation to determine how and where the museum would be opened. “When I began as the museum’s first director in early 1989, all sorts of directions could still be taken – and there was something to say for each of them – but the question was: which direction would be ours?”

This September, Museum De Pont in Tilburg, Holland, will celebrate its 25th anniversary. The museum first opened its doors in 1992 thanks to the generous support of Dutch businessman and attorney J.H. De Pont (1915-1987). The founder had decided that part of his estate was to be used to stimulate contemporary art, but left it up to the board of the new foundation to determine how and where the museum would be opened. “When I began as the museum’s first director in early 1989, all sorts of directions could still be taken – and there was something to say for each of them – but the question was: which direction would be ours?”

With this challenge Hendrik Driessen started his long and exciting journey to create a museum of contemporary art that was somehow different from other institutions. Within the museum-world, De Pont is considered a special venue, hidden in the southern province of North Brabant in a town with a population of just 210,000, but offering in depth exhibitions of contemporary art which have been ranked very high by influential art professionals. De Pont is often considered as a talent foundry for many of the artists who have started their career there and have gone on to become internationally renowned: Anish Kapoor, Marlene Dumas, Jeff Wall, Luc Tuymans, David Claerbout, Roni Horn, Berlinde de Bruyckere and many more.

This September, as an anniversary gift, Kapoor is donating a new sculpture, the appearance of which has been kept secret until now.

In celebration of the anniversary, the museum will stage an exhibition called ReView. The exhibition will display works which tell the story of the building and the making of the collection. It opens on September 16th. Ahead of the exhibition and the anniversary, Hendrik Driessen kindly agreed to answer our questions.

Artdependence Magazine: Unlike many other museums, De Pont wasn’t built on an existing collection. What were the main criteria for selecting the artworks which subsequently formed the museum's collection and what does the selection procedure usually look like?

HD: Even when we started, we were surrounded by well-established museums of contemporary art, and we needed to develop an idea that set us apart from what was already there.

The building was one very important aspect of this. It was the first thing to really provide us with a structure from which we could work. Collecting is like weaving a web: first you need strong threads leading to opposing points and maybe also to opposing characters or visions. Once you have a few of those you can start refining the web, and building from there. As you will know, with our exhibition programme we usually make a solo exhibition in close conversation with the artist involved and always with the scope of the existing collection and the restraints of the building in mind. Looking back, I realise that as I have come to understand the collection better I have become more daring in my decisions. That does not necessarily mean ‘younger artists’. I have learnt that it’s essential to always keep an open mind and never to become dogmatic.

AD: We are living in a time in which many museums, especially contemporary art museums, are struggling to find and define their own identity. How you define De Pont's identity?

HD: I think identity is in part the place as a physical and mental location at the same time: our visitors always say that visiting De Pont is like coming home. This is how it should be.

AD: When you began searching for a suitable location you found a former textile factory in the city of Tilburg, where Jan de Pont had lived. It seems to be very symbolic. The large industrial space of 6000 square meters was turned into an up-to-date museum for contemporary art in 1992. It took 18 months of thorough renovation. What input did the American artist Donald Judd have?

HD: Judd did not have any input in this building, although I did have a show with him at the Van Abbemuseum in 1987. He has had a very important effect on my thinking with his sculptures, which can be nearly as big as buildings. His precision was very influential. Then there were the examples of the Schaffhausen in Switzerland and the Dia - both buildings that were not built for art but both prove that they can sometimes be better than purpose built museum buildings.

AD: In 2016 the museum opened a new wing offering space for film, photography and video art. Tell us a bit about this new direction.

HD: From very early on we have always collected new media and film, so this is not really a new direction, but it is true that as a daylight museum, we always had to go out of our way to make these shows possible, which felt awkward. Last year we were able to open this new space, which is dedicated to these new media formats but not exclusively so. We do not want a situation where you walk from the painting department to the new media department (you will see that we always have paintings, photographs and drawings in the new space as well as in the original spaces of the museum), but for practical reasons this works. Plus, it also has a bit of daylight!

AD: What is your attitude towards performance art?

HD: Very open! We have not yet collected it, but of course today many artists are practicing it. Tino Sehgal is a great example, even though he may not perform it himself. I often attended De Appel in Amsterdam and I was on the board of a foundation to help Marina Abramović and Ulay with their project Lovers, the Great Wall Walk in China. For me, performance art is a fact of life, but not every fact of life needs to play a role in our life right now.

AD: You aim to host three exhibitions per year, alongside the long-term collection. What kind of exhibitions can we expect from you in the coming years (besides ReView-Anniversary Exhibition, featuring Richard Long, Marlene Dumas, Roni Horn, Marc Mulders, Rob Birza, Thomas Schütte, Jeff Wall, Grosse Geister, Ai WeiWei, Christian Boltanski and Robert Therrien among others)?

HD: Upcoming exhibits will include Rineke Dijkstra, a retrospective which we will do together with the Louisiana Museum in Denmark. Then, in the spring next year we will have Sean Scully with recent paintings. Next autumn (2018) we will have some older artists that in my view have been overlooked for a while, such as Anne & Patrick Piorier who have a lot to say in terms of living with other cultures and city structures.

AD: What is the special connection De Pont Museum has with Anish Kapoor?

HD: We are really happy to have connections with many artists. With Anish, it came to result in this amazing sculpture in front of the museum. We were both in our late 20s to early 30s when we got to know each other. This initial contact has remained over the years; he allows me to visit his studio, we can talk about things - it is not always goal driven and our conversations always remain open and interested.

AD: What is your dream exhibition?

HD: That exhibition would never exist so it stays a dream… but I would love to see a museum where there are no divisions at all  - Breughel, Sol LeWitt, Rembrandt, Judd, all together… Gerard ter Borch's Reading Woman next to Richter’s Reading Woman - they would give such an insight into what has stayed and what has changed.