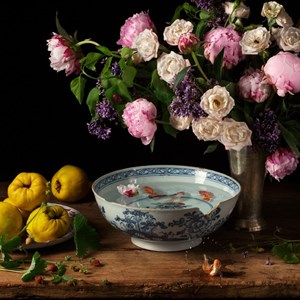 Paulette Tavormina is an American fine art photographer, known for her body of work in the genre of still life photography. She began her journey in photography after attending black and white photography and darkroom technique classes while living in Santa Fe, New Mexico, in the early 1990s. Fascinated by the magical appearance of an image on a piece of paper bathed in chemicals, Paulette began to experiment with a wide range of photography styles. After studying studio lighting, she began photographing historic Indian pottery and Navajo jewelry. Her interest in lighting and composition later led her to work as a photo stylist for cookbooks and a prop and food specialist for Hollywood motion pictures, such as The Perfect Storm, Nixon and Astronaut’s Wife.

­Paulette Tavormina is an American fine art photographer, known for her body of work in the genre of still life photography. She began her journey in photography after attending black and white photography and darkroom technique classes while living in Santa Fe, New Mexico, in the early 1990s.  Fascinated by the magical appearance of an image on a piece of paper bathed in chemicals, Paulette began to experiment with a wide range of photography styles.  After studying studio lighting, she began photographing historic Indian pottery and Navajo jewelry.  Her interest in lighting and composition later led her to work as a photo stylist for cookbooks and a prop and food specialist for Hollywood motion pictures, such as The Perfect Storm, Nixon and Astronaut’s Wife.

Having worked at Sotheby’s New York in the late 1970s and 1980s, Paulette was constantly surrounded by some of the world’s finest works of art.  As her interest in fine art photography grew, Paulette drew inspiration from 17th Century still life painters she admired. The symbolism and rich, poignant arrangements in their work, as well as the combination of tragedy and beauty in careful balance are elements that Paulette pays homage to in her photography.

Still life provides the artist with an incredible sense of freedom – freedom to play with composition and, more importantly, with its components. Each object within a still life painting has its own place and purpose: the symbolism that is portrayed means much more than the element that is simply representing this meaning. In the style of the Old Masters Paulette Tavormina fills her compositions with hidden symbolism. She shares her inspirations with Artdependence Magazine, and reveals details about her work and future plans. 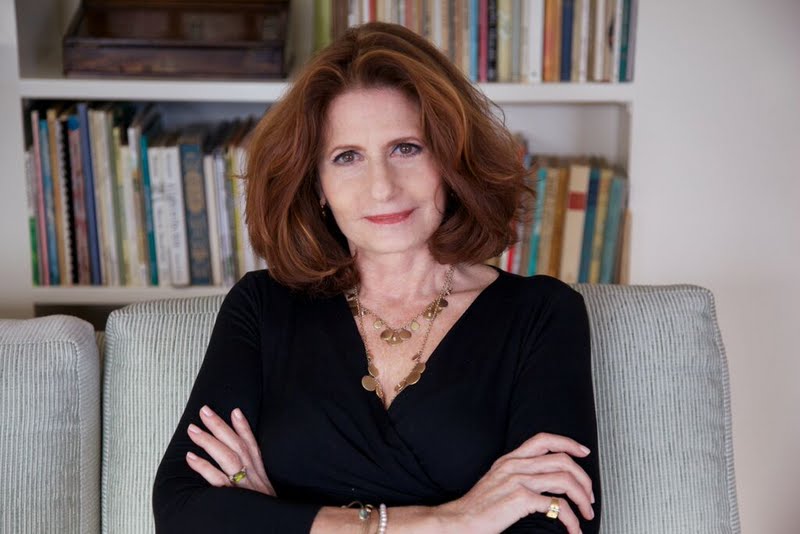 Artdependence Magazine: Paulette, when looking at your work one can see that you are clearly inspired by the Old Masters. Which of these great painters had the biggest impact on you?

Paulette Tavormina: I have long been drawn to the 17th century Old Master still life painters such as: Francesco de Zurbarán, Jan Van Kessel, Giovanna Garzoni, Adriaen Coorte and Luis Melendez. All of them reveal their secrets through mysterious use of dramatic light, masterful compositions, unique placements of objects, and rich color palettes. As global trade expanded during the Golden Age, new and foreign materials were discovered and brought back to Europe. Spices, shells, insects, exotic fruits, Venetian glass and Chinese porcelain, and certain flowers, like the tulip – these elements were celebrated in still life paintings alongside quotidian items, something I am mindful of as I create my own photographs.

AD: Symbolism plays a major role in understanding the still life genre. What does this genre stand for, personally to you?

PT: When I moved to Santa Fe in the late 1980s, a friend introduced me to 17th century Old Master still life painters, such as Maria Sibylla Merian and Giovanna Garzoni. It was then that I became fascinated with their use of symbolism and their style and began to research this genre. I visited many museums to examine these paintings in real life. When I was standing in front of still lifes at the Frick Collection in New York, the Groeningemuseum in Bruges, the Rijksmuseum in Amsterdam, The Metropolitan Museum of Art in New York, or the Louvre in Paris, I imagined these artists gathering treasures and objects from their daily lives in order to telltheir ownstories of wealth and prosperity, stories of the inevitable passage of time and decay. My series Natura Morta is intensely personal. I add many elements to my work to depict my own symbolism and to create love stories. The butterfly represents fragility and metamorphosis; the lemon, fidelity in love; the fig, fruitfulness of knowledge; the oyster, desire. My photographs tell universal stories of the fragility of life and love, hidden emotions, passion, sorrow, vulnerability, and underscore the message that life and beauty are fleeting.

Beyond the beauty, I want to implore the viewer to see as I see, to feel the same emotion I feel when a leaf balances just so and points the eye to the next little narrative that is part of the much larger scope of the work. I want to remind that this beauty is all around us and all so fleeting and yet can be embedded forever in a moment that is a photograph. 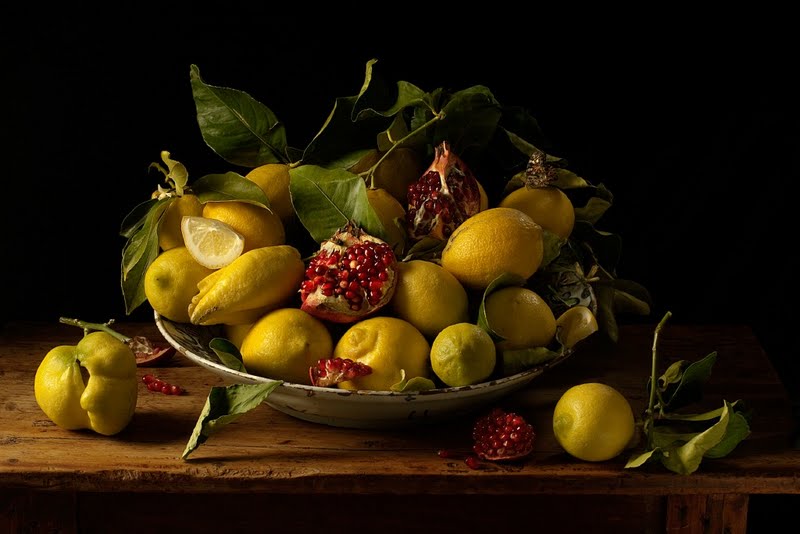 AD: Tell us about your other photographic endeavors.

PT: In addition to my fine art photography, I photograph cookbooks, particularly those where the art director is seeking a fine art approach.  The most important part in this type of photography is working with both patience and speed, as well as paying close attention to the detail and placement of objects. I have worked the Fabulous Beekman Boys on their three heirloom cookbooks and recently photographed a cookbook for the acclaimed New York restaurant Del Posto with Chef Mark Ladner, which will be published by Hachette in Fall 2016. I also work as a freelance photographer at Sotheby’s New York, photographing works of art for their catalogues. 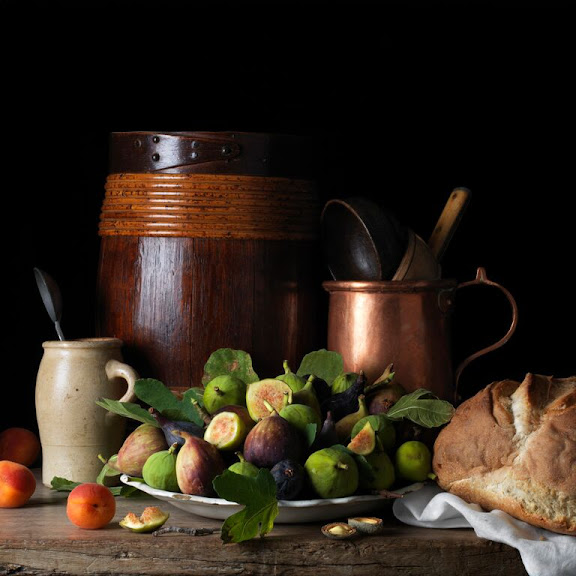 AD: How did your collaboration with National Geographic come about?

PT: I was contacted by an editor from National Geographic and asked to create a photograph that would help tell a story: how food travels from places all around the world, where it is grown, and how it ends up on our tables in New York City. I spent several weeks researching the subject, visiting vendors in New York City and photographing all kinds of fruits and vegetables as I built the image in my mind. I borrowed a period table from Yew Tree House, an antique store in New York City. Then, the day before the shoot, I purchased about 50 different fruits and vegetables. It took me a whole day to set up the tableau and when I sent off the resulting image for approval, the response from the editor at National Geographic was “magnificent!” They even decided to extend the project into a four-page spread and their team undertook major research in order to find out the origin of the produce and how long it took for it to arrive in New York by train, plane and boat. It was a fantastic experience! 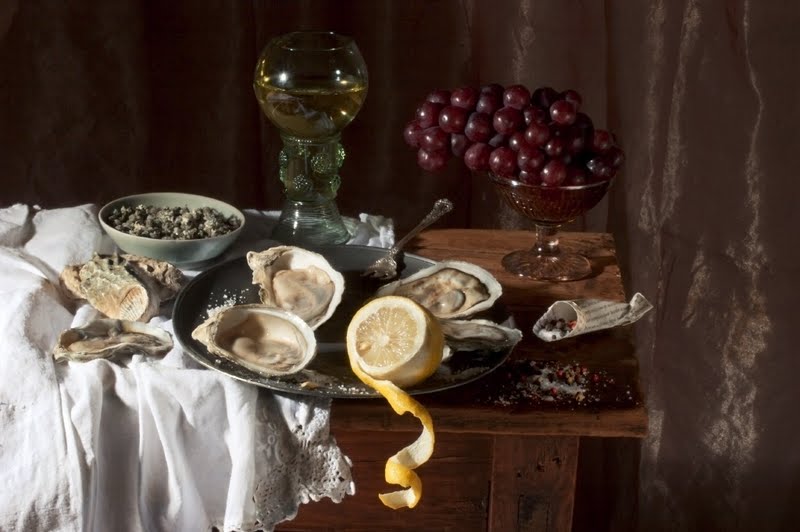 AD: What are some of your future plans?

PT:  My first solo show in London is at Beetles and Huxley Gallery June 30 – July 25, 2015. In April 2016, I will have my first solo museum show at the Academy Art Museum in Easton Maryland. Anke Van Wagenberg is the curator. Monacelli Press will publish my first monograph in April 2016.

I have recently begun working on a new series, Vanitas, which presents many new challenges: finding skulls, period antiques – such as hourglasses, lutes, and coins – and photographing bubbles! 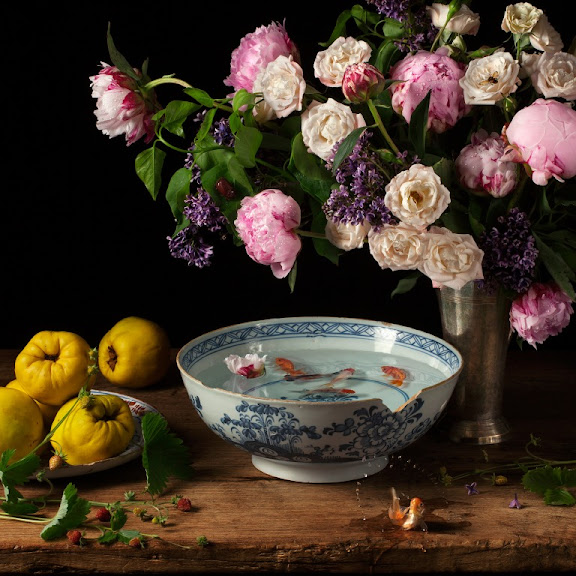 AD: Thank you, Paulette! Good luck at the opening at Beetles and Huxley Gallery!