Interview with Paul Gaffney, author of the photobook "We make the Path by Walking". 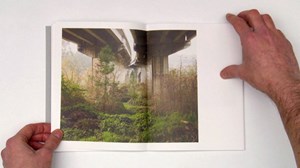 Paul Gaffney is an Irish artist whose self-published book We Make the Path by Walking was nominated for the Photobook Award 2013 at the sixth International Photobook Festival in Kassel, Germany, and shortlisted for the European Publishers Award for Photography 2013. The book was selected for several 'Best Photobooks of 2013' lists, including Photo-Eye and British Journal of Photography. Apart from the wonderful photographs and an unusual design, the book invites us to make our own internal and meditative journey into nature.

Paul Gaffney is an Irish artist whose self-published book We Make the Path by Walking was nominated for the Photobook Award 2013 at the sixth International Photobook Festival in Kassel, Germany, and shortlisted for the European Publishers Award for Photography 2013. The book was selected for several 'Best Photobooks of 2013' lists, including Photo-Eye and British Journal of Photography. Apart from the wonderful photographs and an unusual design, the book invites us to make our own internal and meditative journey into nature. How did the idea come to the artist? How was it realized? What made it a success? Paul Gaffney shares his story with Artdependence Magazine.

AD: First of all you are a photographer. What brought you to the idea of making a book about your artwork and what did you want to achieve by this?

PG: I started to get into meditation at around the time that I began to study photography seriously, and I made a project about a purpose-built centre in the UK where a particular type of meditation called Vipassana is taught in silence during 10 day residential courses. I completed this project during the first year of my studies and later that summer I went walking on the Camino de Santiago in Spain for the first time. I walked 800 km over 24 days and found that the experience was quite similar to the meditation courses - it was as much about the internal journey as the physical journey.  I also came across a book called The Pond by John Gossage that same year, which along with these other influences, inspired me to make a project about the meditative aspects of walking in nature.

AD: And why did you decide to make a paper book, especially in our times? What role does a paper book play for you now?

PG: For me photobooks are perhaps the best way to appreciate photography as people tend to re-read them many times and there is the opportunity to see things differently each time you go back to them with a different mood or in different circumstances, whereas you don't usually get a chance to see an exhibition several times.

The form of the photobook lends itself very well to narrative, and opens up the possibility to tell stories in different ways. I set myself the challenge to use the book format to evoke the sense of a journey, almost a movement through the landscape, as this was something which I hadn't seen done successfully so often before. So right from the start I had intentions to make a book and this was the driving force behind the project.

AD: There is almost no text in the book. What was the purpose behind this?

PG: I find that if you give away too much information, you can close down the viewer's interpretation of the work, and if you give less information, there is a greater chance that a person will bring their own experience to their reading of the work. It's a delicate balance, and of course I had my own personal relationship with each image (it became a very personal journey in a lot of ways), though I felt that it was more important that the series should be open to interpretation, so I decided to use very little text. In the end I simply included the title itself and the poem Caminante no hay camino by Antonio Machado, which appears at the end of the book in both Spanish and English (a quote from this poem partly inspired the title: “Wanderer there is no path, the path is made by walking”).

AD: Both editions of your book are sold out. Congratulations! It’s a great achievement. How did it happen? Who usually buys this kind of book? What is your secret?

PG: I made the project as a part of my masters course at the University of Ulster, Belfast, and by the end of the year I had put together a book dummy, which I sent to the European Publishers Award for Photography, an annual competition for completed but unpublished photographic book projects. I was among the six shortlisted photographers and this gave me the confidence to self-publish the project, which happens a lot more often these days in the photography world. I released the book along with an exhibition at the PhotoIreland Festival last summer and shortly afterwards it was nominated for the Photobook Award 2013, at the International Photobook Festival in Kassel, by the festival director Angel Luis Gonzalez.

It took another couple of months before I had the time to really push the book, promote it online, and go to stores etc. and these nominations made it a little easier to get it onto the shelves. I made the effort to personally visit most of the stores which stocked the book and I think that was an important aspect. I also sent out a lot of review copies, and I was lucky enough that quite a few of the recipients decided to write about it, which subsequently lead to other opportunities and reposts. It was a culmination of these factors which lead to it gaining quite a bit of momentum over a relatively short period of time.

It was also important to me that the book would be affordable and this was a major factor in both the design and marketing strategy. I decided to sell it for 23 euro including shipping, which is inexpensive for a photobook. I sold about half of the books through my own website, so there were a lot of visits to the post office, and although the self publishing process was much more work than I had initially anticipated, it was also much more rewarding, as I had personal contact with, and feedback from, so many of the people who purchased the book.

AD: So, how many copies of each edition did you make?

PG: The normal edition was 1000 copies, and I set aside 50 of those for the special edition, which was aimed towards collectors and came with a signed and numbered print in a laser engraved walnut presentation box. The special edition was something which I had in mind from the start, though it took a while to perfect it. I was fortunate that the first edition sold out before I released it, as this made it a little bit easier to sell.

Most self published books have a smaller print run, so in hindsight printing 1000 books could perhaps be considered naïve optimism! While the photobook scene has grown massively in recent years, it would still be considered a niche within the overall art community, and a large print run for an established photographer working with a major publisher might be, let's say, between 2000 and 5000 copies. When you see those boxes arrive you wonder if they will be sitting under your bed forever, so I feel very lucky to have pulled it off, and I couldn't have imagined that it would have had such an impact for me.

AD: Did it boost sales of your prints in a way?

PG: Well, I think the book was very much tied up with the publicity that I received for the work in general, and although I already had most of my exhibitions set up before it was released, the reviews and re-posts gave me a lot of visibility on the web which has been instrumental in developing my profile. This is the first project which I have really pushed out there, and before last year my work would not have been widely known. The success of the book has encouraged people to visit the shows, which has lead to further print sales, and I have also sold prints to people who have encountered the project online without having seen either the book or a show.

Of course, the main reason to make the book was because it was a major part of the concept of the project, though it has also proven to be a very effective way to promote the work. Whereas exhibitions are usually geographically specific,  you'll never know where a book might end up.

AD: Your favourite genre is landscape. However, you started with documentary photography.  Why do you now stick to landscape photography?

PG: I think the term 'documentary photography' is a lot broader these days than it used to be, and can also encompass landscape projects. One of the most important lessons from my studies was the emphasis which our tutors placed on  having a concept behind a project and communicating and idea or point of view.  Landscape photography can at times be considered to be a bit cliché, however this actually motivates and challenges me to doing something new with the genre. I intend to push myself further with the next project, which forms part of my current PhD research. It’s still in development and will exhibited at Belfast Exposed in late 2015 and at the Centre National de l'Audiovisuel in Luxembourg in early 2016.

The exhibition of Paul Gaffney's work is running in Solstice Arts Centre (Ireland) till October 11, 2014. More information you can find here.