“Intimacy, fantasy and shame” with Olivia Arthur and Bharat Sikka at the Brighton Photo Biennial 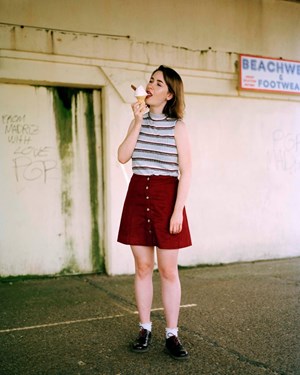 Brighton Photo Biennial, the UK’s leading curated photography festival, runs throughout the month of October in Brighton and Hove, England. Existing since 2003, Brighton Photo Biennial has always been on the verge of critical issues and disturbing themes. For its seventh edition, the Biennial has selected Identity and Self-Representation as two main topics, uniting them under the title “Beyond the Bias – Reshaping Image”. This year, Olivia Arthur (UK) and Bharat Sikka (India) collaborated for the first time to explore the issues of intimacy, fantasy and shame when covering the LGBTQ+ community in their native countries.

Brighton Photo Biennial, the UK’s leading curated photography festival, runs throughout the month of October in Brighton and Hove, England. Existing since 2003, Brighton Photo Biennial has always been on the verge of critical issues and disturbing themes. For its seventh edition, the Biennial has selected Identity and Self-Representation as two main topics, uniting them under the title “Beyond the Bias – Reshaping Image”. The artists presented reflect on issues such as sexuality and gender, body and style, as well as flouting the social and ethical norms, inviting us to consider how contemporary society and our relationship with society is changing through our increased ability to alter our environment.

This year, Olivia Arthur (UK) and Bharat Sikka (India) collaborated for the first time to explore the issues of intimacy, fantasy and shame when covering the LGBTQ+ community in their native countries. Olivia Arthur (b. 1980) is a London-based photographer, who has worked for many years on the East-West cultural divide. Saudi Arabia, Russian’s Crimea, Uganda, Tanzania, India – these are just some of the destinations that she has explored and eternalized in her works. Despite wide geographical range, people remain the main focus for Olivia Arthur. Bharat Sikka (b. 1973) grew up in India, where he worked as a photographer before moving to NYC to earn a BFA in Photography. Contemporary visions of India, globalization and tolerance are the main topics of his oeuvre. Their work will be on show at Brighton Photo Biennial and FOCUS Photography Festival Mumbai in March 2017.

Artdependence Magazine: How did the idea of a collaboration with one another come up?

Olivia Arthur: Actually, the collaboration came from the commission; so, essentially we were brought together and left to make it work however we wanted. I knew Bharat’s name from the Indian photo scene but we had never met before. It was a bit of a first for both of us, we didn’t know how it would work out but we discussed some approaches in advance, and then when I arrived in India we would go out together and sometimes one of us would photograph and then the other would do so later, and sometimes we would literally be doing it at the same time. Since we both worked with large format cameras it becomes quite a scene when they are both out! But it’s also a slow process, so we are able to give each other space. We also understood that we have different approaches, photographically, and we’d help each other that way.

AD: Why do you think the theme of the LGBTQ+ community is getting so much attention recently? What is your personal connection to this theme? Does it relate to other projects you are/ have worked on?

OA: I don’t know if it is getting more attention, but I do know that we were also quite keen not to pigeonhole the issue, choosing instead to look at the issues of gender and sexuality in their broader sense. I have worked a lot on women’s issues in the past and of course things cross over, but nothing specifically about gender and sexuality.

AD: Where does the (working) title “Re:imagine” come from and in what way does it cover the topic?

OA: Actually, this comes from the grant that initially gave the funding to start the project. We thought we would change it to something else, but in the end it seemed loose enough and quite fitted with the ideas of representation that we were exploring.

AD: Are art and photojournalism related and, if yes, how?

OA: I am not a big fan of these classifications. I think we are photographers and that we make work to talk about the world in various ways. What is done with those photographs later (put in a magazine or on the wall) might put them in one of those categories, but the essence of what they are comes back to the photographer. I think a lot of us dabble in many different fields within the photographic world, but when we make what we call ‘personal work’ that is what defines us as photographers. Maybe it will end up on a wall in some years’ time, but that doesn’t define the intention.

AD: Where does the (working) title “Re:imagine” come from and in what way does it cover the topic?

Bharat Sikka: In my view, “Re:imagine” was something we came up with together and with Celia Davies, the curator. We wanted a name which would work for Olivia and for me and for our work when shown together. It plays around with people - how the people can reimagine themselves in the photos, and how the viewers can respond to what they see.

AD: Do your photographs require explanation? Can a photo tell a story without presenting more information on the topic?

BS: I don’t think my photos need an explanation. Every photo has a story and we have a topic in mind but any viewer who sees the image will interpret what they see in her or his own way.

AD: What has been your most challenging project, so far? This one, perhaps?

BS: I think the project in Brighton was challenging as most of my work previously had been about India, so this was not within my comfort space. Furthermore, this project is about a sensitive topic. It was a challenge to get the pictures and stories out of each of the individuals, but what we did get in the end is fascinating.

Read the full version of the interview in our upcomming printed issue!