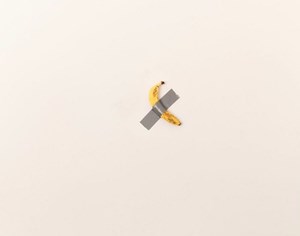 For his latest offering to the art world, Maurizio Cattelan has been going bananas. The Italian conceptual artist made the headlines in September this year when his America (2016) – an 18 carat gold, fully functioning toilet – was stolen while on display in Blenheim Palace. His latest stunt, displayed in the booth of French gallerist Emmanuel Perrotin at Art Basel Miami Beach, is a single banana, which he acquired from the local supermarket and stuck to a large wall with silver duct tape. He has entitled his banana Comedian.

For his latest offering to the art world, Maurizio Cattelan has been going bananas. The Italian conceptual artist made the headlines in September this year when his America (2016) – an 18 carat gold, fully functioning toilet – was stolen while on display in Blenheim Palace. His latest stunt, displayed in the booth of French gallerists Emmanuel Perrotin at Art Basel Miami Beach, is a single banana, which he acquired from the local supermarket and stuck to a large wall with silver duct tape. He has entitled his banana Comedian.

Or rather, three bananas: the first two instantiations of Comedian were sold on the art fair’s opening day to two French buyers, at the sum of $120,000 per banana. The third one on display has gone up in price: artist and gallerist are hoping it will be purchased by a museum for $150,000. There is also a backup banana in the booth in case someone steals the one on the wall. 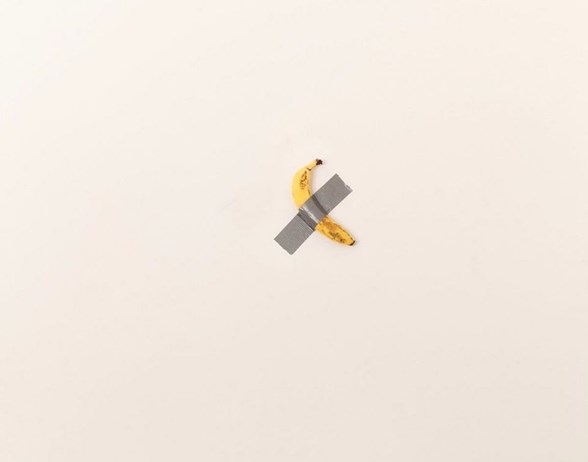 The so-called ‘sculptures’ have been received with tentative acclaim. Commentators seem unable to make up their minds as to whether this is a daring new form of conceptual art or a scam.

Some have sought significance and found it. ARTnews accepts that exhibiting a banana could be seen as ‘lazy’. Nevertheless, it interprets Comedians a "loaded symbol" with "an environmental undercurrent",  a comment on the excessive prices paid for contemporary art, and a ‘dark joke on all of us’. For gallerist Perrotin, the banana is ‘a symbol of global trade, a double entendre, as well as a classic device for humour’. An impressive collection of meanings for a piece of rotting fruit.

Reportedly according to Perrotin, too, ‘every aspect of the work was carefully considered, from the shape of the fruit, to the angle its been affixed [sic] with duct tape to the wall, to its placement in the booth’. The banana’s presentation also alludes to Cattelan’s 1999 installation, A Perfect Day, in which he duct-taped art dealer Massimo de Carlo to a wall for the opening of an exhibition. In other words, the artist was doing his best to make his contribution count to the final product –– within the very narrow limits imposed by his subject matter.

In AD’s view, however, what Cattelan and his buyers are doing is more accurately described as treating art as magic. The bananas on display have no intrinsic value whatsoever. No human effort was required to make them. Despite claims to the contrary, it cannot have taken that much time or effort to tape one to the wall. As others have been quick to observe, the gesture or ‘statement’ is not even very original. Banana peel has been used in a museum installation before;  ‘found’ objects have been put on display since Duchamp’s Fountainin 1917. Koons has done the basketball in brine; Emin has done the unmade bed; Hirst has done the cows in formaldehyde.

The bananas’ only claim to fame is that they have been selected and displayed by the Hand of the Artist, dignified with a title, and issued with a certificate of authenticity. This is the way that significance is given to a crude talisman, a voodoo doll, or a religious icon: by its external associations, or by someone’s say-so. Unlike a true work of art – the Mona Lisaor the Elgin marbles – Comedianhas no intrinsic qualities effected by its artist. Anyone could put a banana on the wall; only one person could paint the Mona Lisa.

An artist from the age of Michelangelo or Pheidias, if he could travel forward to Cattelan’s exhibit at Art Basel Miami Beach, might think he had reached the End Times: the age when visual art finally died. Let’s hope that future generations don’t see it that way –– because, certificate or no certificate, Comedianis not art worthy of the name. It’s bananas.