Jeannie Motherwell: Her Art Stands by Itself 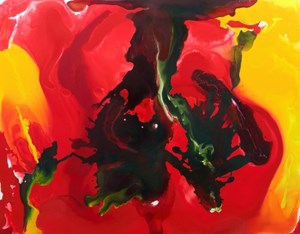 Born and raised in New York city, Jeannie Motherwell was surrounded by creativity from her earliest years. Both her father, Robert Motherwell, and her stepmother, Helen Frankenthaler, were hugely respected abstract expressionist painters whose work is still displayed around the world today. They have both taken their place in the history books for post-war art. As the daughter of two artistic icons, how do you find your own path and message in the art world? Jeannie Motherwell has managed to do both.

Born and raised in New York city, Jeannie Motherwell was surrounded by creativity from her earliest years. Both her father, Robert Motherwell, and her stepmother, Helen Frankenthaler, were hugely respected abstract expressionist painters whose work is still displayed around the world today. They have both taken their place in the history books for post-war art. As the daughter of two artistic icons, how do you find your own path and message in the art world? Jeannie Motherwell has managed to do both.

Jeannie’s pictures seem to capture something of the essence of the natural world and it’s unique sense of movement. Her works move between monochrome shades and bright, bold colour, influenced by sea, sky and wind. She once stated “I engage with my pictures as they swing and move, transcending the picture plane.”

Artdependence caught up with Jeannie Motherwell to find out more about her inspirations and her creative path.

Artdependence Magazine: Do you prefer to work with large format canvasses?

JM: I first began painting on large canvases, so it feels natural for me. Having grown up with two parents who did the same, it’s in my blood. It hasn’t always been that way though. For many years I did paint on a much smaller scale. I even did some intimate collages. It’s only been the past four years or so that I’ve been painting on a large scale again. Because I’ve worked on intimate sizes as well as large canvases, my works lend themselves to being appreciated from a distance, but they also command the viewer to get up close to see the detail.

AD: The inspiration for your latest solo exhibition comes from photos taken by the Hubble Telescope. What is it about nature that fascinates you and keeps you coming back?

JM: These works are displayed in my solo show in the SoWa District of Boston at the Rafius Fane Gallery. The show consists of 17 large paintings and 3 large works on paper. It is inspired by pictures from the Hubble Telescope, but also combines my reflections on the sea, sky and earth. I’m looking for the Holy Grail in some sense by trying to mesh outer space and the universe with what I know from earth. It’s a bit of a daunting task, but it’s primarily just the inspiration. Ultimately I hope my audience will feel an experience in the here and now.

AD: Over the years there has been an evolution in your work from "more" realistic to almost completely abstract.  How does this process work?

JM: I have always painted and alluded to abstraction, but in some of my earlier collages there was representation from torn images. They were incorporated into a more abstract space.

AD: Is it evolution or re-inventing yourself as an artist over and over again?

JM: I think I’m always on a journey – searching and exploring all the time. What if I do this, or that? Or what happens when I do this instead of that? Questions I ask myself all the time - especially in my newer work which is very process oriented. There are things that happen that I don’t expect. I may try to control these things, but I am really searching for answers to make them work for me so that it’s recognizable in some kind of visceral way.

AD: How important is color in your work?

JM: Color is very important in my work. Even black is a color to me. It is my go to color when I don’t know how to begin or end a picture. The colors I use are somewhat by chance, but I am conscious of what one color does to another. In my newer work, color dominates the themes. My show at Rafius Fane Gallery for instance has different dominant colors in every painting, but I still believe the show looks cohesive as a whole.

AD: Being an artist named Motherwell, how difficult has it been making a name for yourself as an individual?

JM: It has always been present in my career, but I am old enough now to see it as a blessing rather than a roadblock. The recent review of my show in the Boston Globe is an example of that validation, for which I am very grateful.

AD: What are your future plans?

JM: I am working on a show for summer 2018 in Provincetown, Massachusetts. It will run concurrently with the Helen Frankenthaler show at the Provincetown Art Association and Museum (PAAM). Provincetown is where I summered with Helen and my father, throughout my childhood and beyond. I still return there every year for a vacation.