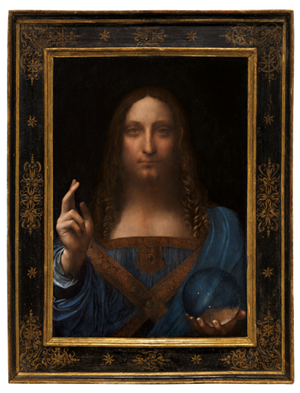 A few weeks ago, we reported that Artdependence strongly suspected that Leonardo da Vinci’s Salvator Mundi would be displayed at the Louvre Abu Dhabi. The painting smashed all auction records when it sold for a total of $450.3 million at the Christie’s postwar and contemporary sale in November.

A few weeks ago, we reported that Artdependence strongly suspected that Leonardo da Vinci’s Salvator Mundi would be displayed at the Louvre Abu Dhabi. The painting smashed all auction records when it sold for a total of $450.3 million at the Christie’s postwar and contemporary sale in November.

Since the extraordinary sale, there has been much speculation about the identity of the mystery buyer. On December 6th, 2017, the mystery ended when it was revealed by the New York Times that the purchaser of the most expensive art work ever sold is the Saudi prince Bader bin Mohammed bin Farhan al-Saud. On the same day, it was also confirmed on social media that the Salvator Mundi will be “coming” to the Louvre Abu Dhabi. It is unclear how long the painting will remain at the Louvre.

Bader bin Abdullah is not knows as an art collector and keeps a relatively low public profile. The New York Times reported that he will be paying for the painting in six instalments of $58 million each. The instalments will be made over the course of 6 months. The Times also claimed that Prince Bader did not register as a potential bidder until the day before the sale. Following the Times article, Christie’s declined to comment on the news.

Salvator Mundi was authenticated as a Leonardo da Vinci painting in 2011. In 1958 the painting had come up for auction at Sotheby’s and sold for £45. In 2013 it sold again for $127.5 million. The painting has a controversial history, having belonged to King Charles I before disappearing for several centuries. There are still some critics who doubt its authenticity as a da Vinci.