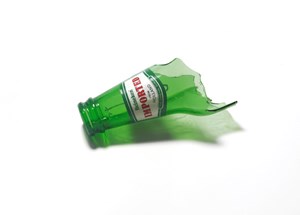 Broken glass and barbed wire always play a major role in describing Kendell Geers' attitude to what is going on in the world. The range of media used is very diverse: sculpture, installation, painting, photography, and drawing. Kendell Geers has exhibited globally and took part in a number of events: Documenta, Taipei Biennial, Lyon Biennial, Glasstress at the Venice Biennial to name a few. He also had solo shows in Stedelijk Museum voor Actuele Kunst in Gent, Palais de Tokyo, Haus der Kunst in Munich etc.

“Make art, like love” – from Manifesto written by Kendell Geers in 2011

Kendell Geers was born in Johannesburg during the time of apartheid. When turned 15, Kendell ran away from home in order to get involved into the anti-apartheid movement. After finishing school Kendell enrolled at the University of the Witwatersrand in Johannesburg for a Fine Arts degree. To avoid imprisonment he had to leave South Africa in 1989 and lived for a short period in exile in the United Kingdom and New York where he worked as an assistant to artist Richard Prince. After coming back to South Africa in 1990 Kendell stays there till 2000 and then he moves to Brussels. The period between 1988 and 2000 is considered to be very fruitful in Kendell’s career, full of harsh political context in his work. Broken glass and barbed wire always play a major role in describing his attitude to what is going on in the world. The range of media used is also diverse: sculpture, installation, painting, photography, and drawing. In 2011 Kendell Geers wrote a Manifesto, where with a series of statements he shares his attitude towards life, time, love, art.

Artdependence Magazine: Your works can be interpreted as a political statement against terror and suppression made through art.  What does art mean to you? Is it, in the first place, your asylum, way of expression or a protest form, means to bring a message?

Kendell Geers: I believe that the strength of art lies in its ability to transcend logic through contradiction. If it is fully embodied, art could never be subject to a “for or against” reading for it is always simultaneously both creative and destructive. My work does not judge the spirit of the world I live in, but embodies it instead. Art is certainly a sign of hope for it permits the imagination to wander where it cannot in reality. If there be protest in my art, it is in the form of celebrating life and affirming spirit.

AD: In 1985, to avoid conscription, you enrolled at the University of the Witwatersrand in Johannesburg for a Fine Arts degree. Was it a spontaneous action or you were already interested in art (and if so, how did it start?).

KG: It was absolutely a spontaneous protest against the socio-political condition I found myself in at the time. I literally enrolled myself into art in order to not go to jail for six years as punishment for refusing to serve in the Apartheid military. The conditions of enrolling at Wits University at the time dictated that I give a second choice and I felt that to be in contradiction with my right to choose so I decided to follow the irrational illogical option, the second choice, in celebration of my refusal to enter the rationalism of military conscription. Until that day I had never so much as opened a book about art before, much less even drawn an apple.

AD: How did you trip to the USA influence you when you escaped there at the age of 21?  Did apprenticeship with American artist Richard Price change your vision in general and of art in particular?

KG: I lost faith in what seemed so compelling from a distance. I realized that so called “post modernism” was tagged on by the critics after the fact. I understood that art was a system, already rotten to its core and that what I had perceived to be history was little more than circumstance. The eggshells of my perception were broken and it was time to start making omelets.

AD: In  1990 after Nelson Mandela and other political prisoners' were released from prison, you finally returned from your exile to Johannesburg where you worked as an artist, curator and art critic. Why did you go back to South Africa? Did you ever think of staying in the USA and working as an artist there?

KG: I always saw myself as part of the Anti-Apartheid movement so with the release of Nelson Mandela I saw it as a duty to return to South Africa to be part of the new democracy. I returned to South Africa, inspired to build a better future.

AD: Please tell us about your self portrait (1995). How do you see yourself in it?

KG: I can talk about this broken bottle "self portrait" for hours!

Many people think that I chose Heineken because I actually like beer and more than that, drink Heineken and I have to correct them. Identity is very complex, especially if you are a White African and self-loathing is part of your cultural inheritance. In 1990, when Mandela was released and Apartheid de-legislated, our identity as South Africans was up for grabs. Our history, culture, morality, faith, values and everything that one might normally take for granted, as “identity” was in my case illegitimate. As an African I consider myself an animist and respect my ancestors, but those ancestors are Dutch. The broken bottle of beer speaks of identity as violence, the self as broken, the spirit the bottle once contained has been drunk and all that remains is the garbage of history.

Self Portrait, 1995, Found Object, Courtesy: the artist
AD: In 2011 you wrote a political-erotical-mythical manifest, where you state your basic life principles. How did this idea come up to you?  Is there any main principle you follow throughout your life?

KG: I found myself in a deep depression at the time brought about by the injustices of an art system that cares only about market ranking and price tags. The art system has no use or value for vision, integrity or consequence. I decided to mark time by writing down my thoughts about art. I know that my thoughts then were very different than they were in 1988 when I began and almost certainly would be different again from what they might be in 2022.  I decided to take the courage to admit what I am thinking and express what I believe art might be in a time when most artists are terrified of being caught with their pants down. The manifest is true and correct only for that moment of writing, but the thoughts expressed flow from somewhere and are on their way to somewhere else as everything in life is interconnected. Full Manifest is here.

AD: Is recognition important to you?

KG: Much more important than recognition is the desire for respect.

AD: Are there any political events now happening in the world, that you would like to refer to in your work?

KG: The planet is in meltdown and if we do not slow down and pull back from the precipice we are all going to drive our species into extinction. I don’t care for politics today because every politician seems to have a price. How can we speak about politics when corporations have bank balances that are the double of the United States? How can we speak about politics when the politicians allow fracking and tolerate the accelerated destruction of nature? How can we respect politicians who use fear as an operating system to dumb their constituencies down into docile consumers?

More information about the work of Kendell Geers can be found here.