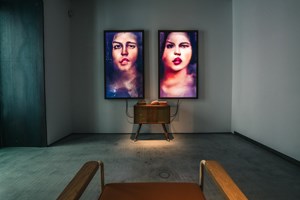 Mario Klingemann (Munich, Germany) is an artist who uses algorithms and artificial intelligence to create and investigate systems. He is particularly interested in human perception of art and creativity, researching methods in which machines can augment or emulate these processes.

Image:  Memories of Passersby I, Mario Klingemann, 2018, Courtesy of Onkaos

Mario Klingemann (Munich, Germany) is an artist who uses algorithms and artificial intelligence to create and investigate systems. He is particularly interested in human perception of art and creativity, researching methods in which machines can augment or emulate these processes. Thus, his artistic research spans a wide range of areas like generative art, cybernetic aesthetics, information theory, feedback loops, pattern recognition, emergent behaviors, neural networks, cultural heritage data or storytelling.

He is artist in residence at the Google Arts & Culture Lab, winner of the Lumen PrizeGold 2018, the British Library Labs Creative Award and has been recognized as a pioneer in the field of AI art.His work has been featured in art publications as well as academic research and has been shown in international museums and at art festivals like Ars Electronica, ZKM, the Photographers' Gallery, Collección Solo Madrid, Nature Morte Gallery New Delhi, Residenzschloß Dresden, Grey Area Foundation, Mediacity Biennale Seoul, the British Library, MoMA, or the Centre Pompidou. 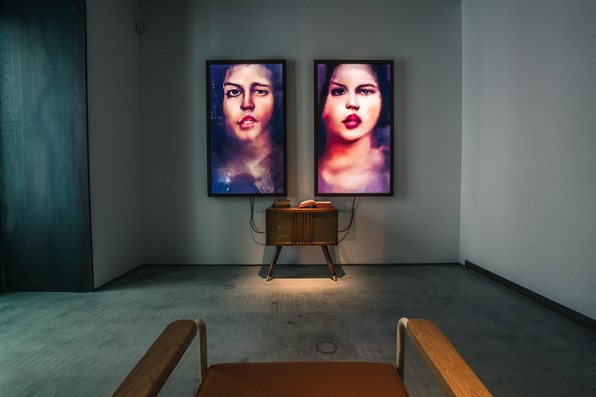 Memories of Passersby I, Mario Klingemann, 2018, Courtesy of Onkaos

ArtDependence Magazine, Etienne Verbist (AD): Who are you and why do you do what you do?

Mario Klingemann (MK): I’m an artist and a skeptic with a curious mind. My preferred tools are neural networks, code and algorithms. My interests are manifold and in constant evolution, involving artificial intelligence, deep learning, generative and evolutionary art, glitch art, data classification and visualization or robotic installations. If there is one common denominator it’s my desire to understand, question and subvert the inner workings of systems of any kind. I also have a deep interest in human perception and aesthetic theory.

AD: What will be the impact of what you do?

MK: Since I taught myself programming in the early 1980s, I have been trying to create algorithms that are able to surprise and to show almost autonomous creative behavior. The recent advancements in artificial intelligence, deep learning and data analysis make me confident that in the near future “machine artists” will be able to create more interesting work than humans. 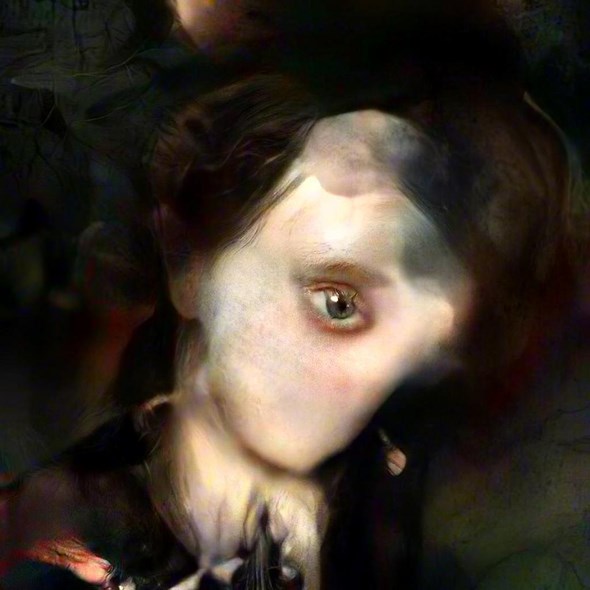 AD: What are GANs? How does the process work?

MK: GANs, short for generative adversarial networks, are a particular architecture of deep neural networks which turned out to be very effective at learning how to generate new images based on a set of training examples. They are not the only way to create images with artificial intelligence, but many artists are using them because they are relatively easy to train and at the same time very versatile tools.

The principle how they work has been explained many times by now, so I will not explain them in detail. The basic idea is that you have two neural networks, one, the generator tries to make images that look similar to the training examples it has been given.

The other one, the discriminator, tries to learn to distinguish real images, like the ones from the training set from fake images, the ones that the generator makes. Initially both networks know nothing about the task they have to do and produce very unconvincing results, but every time one of the models makes a mistake, like when the generator gets caught with a fake or the discriminator lets a fake image pass, they learn from that and slightly improve their methods. 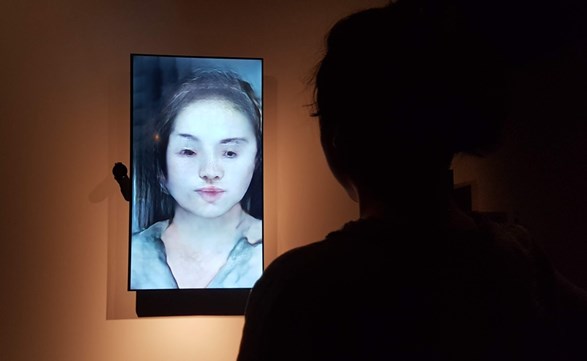 Over time this back and forth between them makes both models become very good at their tasks so that eventually we as the human discriminators might not be able to distinguish a real image from a fake one anymore.

AD: What role does the artist play?

MK: GANs or other neural networks are just tools that don't do anything unless you use them. The role of artists has not changed from what it always was: ask questions relevant to the time they live in, explore the boundaries of aesthetics and transform or expand what we understand as art.

AD: What is your goal?

MK: My long-term goal is to find out how much autonomy I can give a machine and how far I can remove myself from this process. Apart from that I try not to get bored and to satisfy my curiosity how the world might work and where it is heading.

MK: It is a tool. And just like painting is just one possible form of artistic expression, so is AI art. There will always be artists, but the definition of what art is is in constant metamorphosis. Photography did not make painting obsolete, but in conjunction with the invention of the paint tube it was instrumental in the emergence of modern art. So, the question is what challenges will AI art pose to more traditional art forms and how will that influence them? Will we see new forms of art that are a reaction on AI art but focus on the things that AI cannot do? Will there be a symbiosis?

AD: What does AI art look like 10, 20, 40 years out? Is it a threat to artists or will it still be a tool for augmenting their creativity?

MK: What we call AI art is just a few years old, we are at a very early stage so it is impossible to say where this all will lead to. It is still the phase of the pioneers that try to understand this new world, that travel through it without a map, but might discover certain landmarks that will help others to find their way in easier. It is the time of "first word art", that is focused on the technical novelties and new possibilities and that is still trying to find its own language.

Over time these tools will become more accessible and our understanding of the possibilities and its unique qualities will grow. More people coming from different background and with different questions will enter this field. The AI aspect that at the moment still feels very unusual to many will become more like the norm that is simply something we take for granted, just like mobile phones are something that have become so natural to us that many people can probably not imagine living without them. Just like you use Wikipedia to quickly look up some fact that you don't bother anymore to memorize so might use AI to give us some inspirational input.

AD: What Is the Future of Art?

MK: Who am I to say? The only constant about art seems to be that it is constantly evolving and shape-shifting, but to predict what that shape will be is as impossible as to predict whether it will rain in 4 weeks.

AD:What is your dream project?

MK: I don't think I have dream project. I try to bring the ratio of the things I enjoy doing and the things I cannot avoid doing in favor of the former. So, the the ideal state is the one where I can immerse myself in the process of art-making without pressure, deadlines or the need to produce any useful or marketable results. 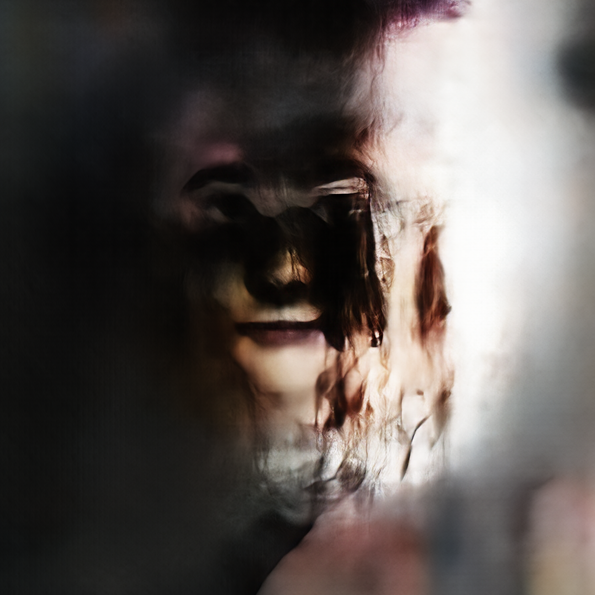 MK: One is to be the canary in the coal mine, to sense the flows and turbulences in the way the world changes and by asking relevant questions make us aware of them. The other one is to make sure we do not get too comfortable and content with the status quo.

AD: What memorable responses have you had to your projects?

MK: It makes me happy when people tell me that my art inspired them to make art themselves or motivated them to learn more about programming or AI.

AD: What role does art funding have?

MK: For me that is too early to tell since only until recently I financed all my art-making through commercial work that was not necessarily artistic but was using some of the same skills. Having funding or commercial success does allow me to focus on what is important to me and what I enjoy doing and to pursue projects that might have been out of my reach earlier.

AD: What research do you do?

MK: These days my research is mostly in the area of neural networks. In this field the major breakthroughs and inventions is of course done by scientists but using this knowledge as a starting point I try to find ways to use or abuse things that were not in the intention of its maker or I am looking for solutions for aesthetic problems or challenges that arise from having to present my work in an artistic context.

AD: What is the role of the people, the crowd in your project?

MK: I don't really use the term "crowd", but part of being an artist is having an audience. I often create my art for an audience of one - myself, but when I make interactive work of course I have to consider the behavior and feedback of other people.

AD: How do you handle feedback?

MK: I welcome feedback of any kind. Of course, positive feedback is nice, but I do appreciate critical questions or negative responses if they are constructive. The only feedback that I seem to get a lot, and which is getting a little bit old by now is the "reminds me of [enter artist of your choice or Francis Bacon]" reply which is something that Twitter was probably invented for. There seems to be a certain urge of people to make you aware that you are not really original, which is an urge I have given in to myself for many years, when seeing the work of others, but which I am trying hard to resist these days since it is not really helping.

AD: What social media do you use?

MK: Twitter is where is spend most of my time, it's my sketchbook and diary, I am also in Instagram but do not post as regularly as I probably should.

AD: on which segment is your activity or platform based on the segmentation of the crowd economy?

MK: I fear that don't find myself anywhere, so I would probably pick the fist in the middle. But maybe you can tell me where you see me there?