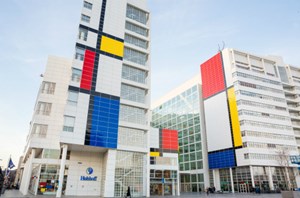 Over the next few weeks a number of prominent buildings and locations in The Hague will undergo a Mondrian metamorphosis. This is the start of city’s celebration of the theme year ‘Mondrian to Dutch Design’.

Last week The Hague unveiled the largest and most known Mondrian painting in the world on one of the city’s most striking buildings: City Hall. Red, yellow and blue surfaces with black straight lines are now decorating several parts of the building, designed in 1986 by an acclaimed architect Richard Meier. Over the next few weeks a number of prominent buildings and locations in The Hague will undergo a Mondrian metamorphosis. This is the start of city’s celebration of the theme year ‘Mondrian to Dutch Design’.

Gemeentemuseum The Hague has the world’s largest Mondrian collection. On the occasion of the theme year on 11 February His Majesty the King will open the exhibition ‘Piet Mondrian and Bart van der Leck – the invention of a new art’, which will be open to the public on 12 February. Later this year for the first time the same museum, Gemeentemuseum The Hague, will present all 300 Mondrian works, which are normally loaned out to international museums, in 1 large retrospective exhibition entitled ‘The Discovery of Mondrian’ (3 June to 24 September). Piet Mondrian and Bart van der Leck are the 2 most important painters in the ‘De Stijl’ art movement, which celebrates its 100th anniversary in 2017. This will also signal the start of a publicity campaign aimed at introducing everybody in the Netherlands to Mondrian’s work.

Courtesy of the image: The Hague City Hall