No Photos on the Dance Floor! 1989-Today at C/O Berlin 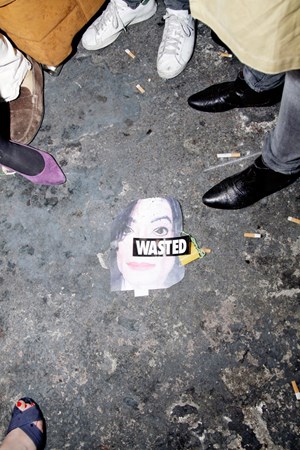 A photo exhibition on a subject that denies the camera as the medium comes slightly as a paradox. Nevertheless the exhibition at C/O, ex Amerika Haus in Berlin, calls a various and numerous audience and the question why is quite rhetorical.

A photo exhibition on a subject that denies the camera as the medium comes slightly as a paradox. Nevertheless the exhibition at C/O, ex Amerika Haus in Berlin, calls a various and numerous audience and the question why is quite rhetorical.

Berlin, that has an exceptional story related to the club scene, is here taken into analysis through a compendium of videos, pictures, slides, tabloids and club keepsakes such as clock-room token and flyers. The 1989 is the beginning of the photo journey because of the fall of the wall and date when finally the two sides of Berlin came together. In that period empty buildings were taken over by young and creative people coming from every part of Europe and beyond creating hubs of artistic forms. Squatted buildings and fabrics became artistic centres, basements were transformed in clubs and bars, flat became temporary exhibitions locations. In this time various clubs were opened and the night life became radical, colourful and wild. Techno and punk, with all the ramifications and beat transformations that came out with those genres, inhabited clubs, bars, flats, epicentres and the night entertainments in general. ‘At that time Berlin-Mitte was still a pile of rubble, after the war, residents had not bothered to rebuild their bombed houses. They’d just knocked out the broken display windows of their shops and bricked up the openings. Behind the facades, they sold bark, shards of glass from their broken windows, and whey powder, for forty-five years. Then young people from the west came, squatted the abandoned shops and apartments, and sold drinks to other people who had arrived in Berlin’  Rafael Horzon quoted in the exhibition. Outside Tresor, from the series Temporary Space, 1996, Martin Eberle

In a context of general freedom and experimentations, the clubs increased and became an attraction, not just for the Berliners but for the world club aficionados. Club were and are locations where to loosen up, where to evade dancing, where to express what is kept hidden during the day, where to be wild and fully let go. Dancing tour de force have a proper cathartical effect and the smoky, sweaty air that normally would be unpleasant, become integral part of the experience, a sine qua non for every respectful club.

‘Photo bans allow a tradition to survive in the digital age. One that existed in club culture long before digitalisation and omnipresent cameras. The tradition of partying together in a space in which you can lose yourself to the music and feel free and safe at the same time. Free from surveillance, free from consequences and judgement of the outside world’ Jan Kedves quoted in the exhibition. There is no possibility to understand what happened and happens in Berlin clubs unless they have been experienced. The individual freedom and a general respect for whomever is sharing the same experience is a must and the joy and sense of freedom emerging from that cathartic experience is something that cannot be described.

The photo exhibition depicts bizarre outfits, portraits of Berlin producers and djs, portions of club buildings and excruciated faces and bodies, consumed by the night life and its habits that probably, only who have experienced the same, can feel empathetic. Photos of empty clubs provoke a sort of melancholia recalling the energy found in them when full. Those buildings, that most of the times are industrial fabrics, are meant to be lived and transformed in lively, energetic and colourful environments where the dose of shared love, sympathy for each other and freedom of expression, are integral part of the milieu.

Stimulating memories, empathy and imagination, the exhibition rises curiosity and interest for the night club life that cannot be fully understood if not lived.