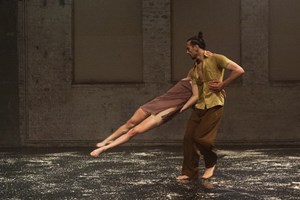 Blenard Azizaj and Maya Gomez present NoBody´s Land, a powerful piece choreographed and danced by the duo which with masterly interpretation, stage a complex scenario made out of human dynamics. Appropriation, possession, anger and revenge strongly symbolise the brutality of human behaviours and at the same time relate to sundered countries, borders, intolerances and the following deplorable cruelties.

Blenard Azizaj and Maya Gomez present NoBody´s Land, a powerful piece choreographed and danced by the duo which with masterly interpretation, stage a complex scenario made out of human dynamics.

Appropriation, possession, anger and revenge strongly symbolise the brutality of human behaviours and at the same time relate to sundered countries, borders, intolerances and the following deplorable cruelties. 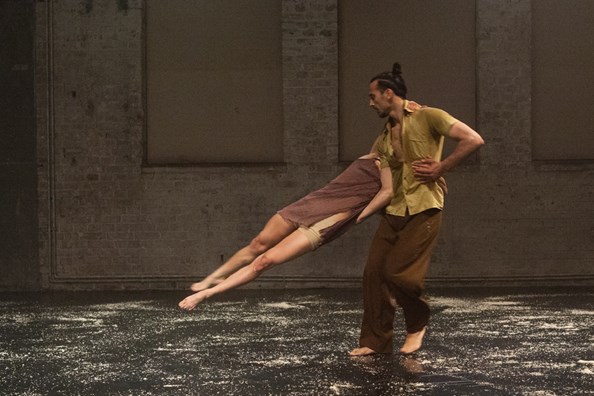 The two, diffident at first, get slowly closer intrigued and full of curiosity towards one another and a shared language begins as they start encountering and connecting.

As the piece goes on the dancers-strangers grow more fiery and strapping, pouncing on each other and exchanging blows.

Their use of ferocity merged with tenderness generates a stunning energy and calls to mind dynamics as affection and aversion connected to humankind’s sensations and furthermore applicable to civilisations and territories. Diverse and rich movements foster a storyline based on conflicts related to geo-political and mankind’s feelings, where belonging shifts into exclusiveness, passion turns into possession, desire sinks into jealousy and commitment slides into appropriation.

Masculine fierce shown by Blenard Azizaj is counterposed to the initial tame temper of Maya Gomez that lately will turn into flaming opposition to face the passionate and boisterous companion.

The similar unforeseeable destiny of countries and individuals seem to be exposed to bizarre factors evoking a sense of uncertainty;  as looking at constellations to find the route but the stars, that once were luminous fixed points, appear now unclear making the sense of orientation loose and uncertain. 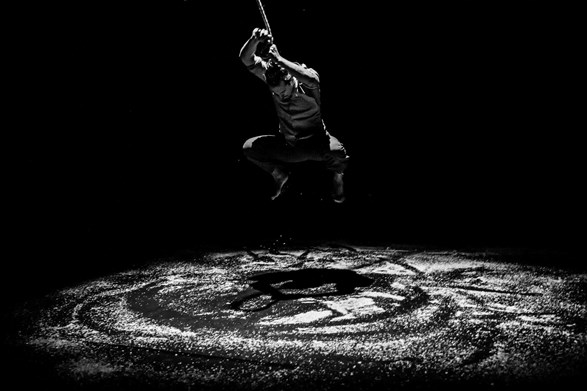 Alarming tendencies and frightening reactions are the result of fears and inability to see how, what is diverse and stranger to us, is an enrichment for the life and world we live in.

So the two creatures, initially by their own and perturbed, appear then willing to interact, synchronising with parallel forces and becoming a strong bond emerging balanced and complete in the union.

Strength through unity, an old proverb say, and it strongly resonates looking at the fluid converging actions that recall idea of harmony and enrichment.

The two dancers generate a captivating on-going scene that simply mesmerises, and the magical energy released by the intersecting bodies is marvellous, catalysing the gaze and wonder of the spectators.