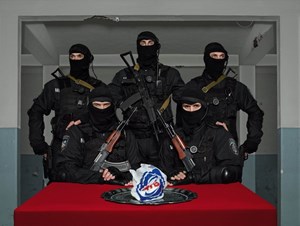 For the first time in Kyiv at one of the central venues, Complex "Toronto-Kyiv", from 2nd till 5th November 2017 Photo Kyiv, an international art fair dedicated to photography, will take place. This event is unique in its essence and content. It requires courage and unswerving belief in photography from its organizers to emphasize photography on the Ukrainian developing contemporary art market and dedicate a whole fair to it. Even if photography has not yet found its place on the art scene in Ukraine, it will necessarily find its viewer and buyer in the near future, according to Photo Kyiv’s team. One of the main sectors of the Photo Kyiv fair will be dedicated to the exhibition of well-known Ukrainian artists, including such names as Bratkov, Savadov, Marushchenko, Dondyuk and many other outstanding photographers. Unbelievably as it may sound, but these artists have never been gathered before on one exhibition.

For the first time in Kyiv at one of the central venues, Complex "Toronto-Kyiv", from 2nd till 5th November 2017 Photo Kyiv, an international art fair dedicated to photography, will take place. This event is unique in its essence and content. It requires courage and unswerving belief in photography from its organizers to emphasize photography on the Ukrainian developing contemporary art market and dedicate a whole fair to it. Even if photography has not yet found its place on the art scene in Ukraine, it will necessarily find its viewer and buyer in the near future, according to Photo Kyiv’s team. One of the main sectors of the Photo Kyiv fair will be dedicated to the exhibition of well-known Ukrainian artists, including such names as Bratkov, Savadov, Marushchenko, Dondyuk and many other outstanding photographers. Unbelievably as it may sound, but these artists have never been gathered before on one exhibition. The main goal of the fair, according to the organizers, is to present photography as a self-sufficient part of ​​contemporary Ukrainian art and to hold an event according to European standards.

Photo Kyiv’s team found time in the midst of preparations for the first edition of the fair to meet for an interview with Artdependence Magazine and talk about how the idea of ​​creating the fair was born, what difficulties it has to face, what makes Photo Kyiv different from the existing fairs and what will be possible to see within the framework of the event.

Artdependence Magazine: How did the idea of ​​organizing the first fair in Ukraine dedicated exclusively to photography arise?

Ivanna Bertrand: The idea of ​​organizing Photo Kyiv came to us a year ago when we started working with young photographers.  We were faced with the fact that photography as a medium is practically not represented by museum institutions here in Ukraine and there are very few galleries that show and sell photographs, despite the fact that many people in Ukraine are fond of photography. We were excited by the idea of ​​drawing attention of a wide audience to this artistic form and presenting photography in a new format for Ukraine, believing that it still remains undeservedly in the shadows. Today in the art world photo fairs are no less popular than fairs of contemporary art. Such fairs, as a rule, are important cultural city events, and contribute to the development of cultural tourism. No wonder Paris Photo is held in the Grand Palais, the most prestigious location in the French capital. In the future, we would like to see Kyiv as an important and dynamic cultural center of Eastern Europe. So we took up this ambitious and large-scale project - art fair Photo Kyiv.

AD: Is Ukraine ready to perceive photography as an independent medium of contemporary art?

Ivanna Bertrand: I think that the Ukrainian viewer is ready to perceive photography as a self-sufficient kind of art, and today we have all prerequisites for this. People actively attend cultural events, including photo exhibitions, master classes, workshops and lectures on photography. Ukrainian photographers constantly participate and win international awards. Another question is whether a Ukrainian collector is ready to buy photography? It is still difficult to answer this. We hope that our art fair will be the first step towards the formation of the photo art market in Ukraine.

Nikita Shalenny, Сomposition №2, from the series “Where is your brother?”, 2013

AD: When, in your opinion, can the fair be called successful?

Anna Savitskaya: In our opinion, the fair can be called successful when participants, visitors and organizers have achieved their goals. For galleries it is important to acquaint the public with the work of photographers they represent, to establish contacts with interested potential buyers and, of course, to sell the work. We presume that visitors would like to attend a well-organized art event, find out more about Ukrainian and international photography and start making first steps in forming their own collections. And for us, as organizers, the most important thing is to attract interest in photography by organizing a high-level event so that visitors can see the unique exhibition planned within the framework of Photo Kyiv, the selection offered by galleries today, attend the lecture program and take a closer look at the winners of the Photo Kyiv 2017 contest.

AD: What difficulties did you encounter when organizing the event?

Anna Savitskaya: Since Photo Kyiv is the first event of such scale in Ukraine dedicated exclusively to photography, decided to bring the focus on Ukrainian artists. So, one of the difficulties that we encountered in preparing for the fair, is a small number of galleries engaged in photography in Ukraine. Undoubtedly, there are always difficulties with financing cultural projects, but I guess Ukraine is not an exception here. Also, we must not forget that the gallerists and exhibition artists cannot yet assess the benefits of participation. The excitement about the first edition of the fair, responsibility for future reactions and feedback – this is what motivates us, as organizers, to make a unique event at the highest level. And the fact that difficulties exist to be surmounted, such a fair is in demand by society and will arouse the interest of all segments of the population - we do not doubt!

Maxim Dondyuk, from the series “Culture of the Confrontation”, 2015

AD: How will Photo Kyiv be different from similar events in other countries?

Anna Shevetovska: First of all it will be different in its content and participants. We will have a group exhibition of Ukrainian well-known photographers, as well as selection made by Ukrainian galleries, who take an active part in the development of photo art in Ukraine. This is very important for our cultural heritage - for Ukrainian identity. We must understand that the fair will be held for the first time, therefore, of course, we will try to match the level of such advanced countries as France, the United Kingdom and Switzerland, which have been holding similar events for many years. We also focus on the educational part, showing the Ukrainian audience a unique selection of photographic works. We plan educational program from photo schools in Kiev, which will give introductory lectures on photography and invite local publishers who are dealing with photo and art books. We will have a contest of young talents, which is not unimportant. We want to give an opportunity to young, inexperienced photographers to show their works alongside with the established artists.

AD: What is the idea behind the exhibition’s title: "Ukrainian archetype"?

Dmitry Bogachuk: An archetype in photography is a reference towards a fundamental character, a desire to go beyond simple fixation of a person or the environment in which he lives, but to reveal something way more than an image - a generalized character. In our case, these are visual images directly related to the Ukrainian people and their identity.

AD: What criteria did you use to select artists and works for the exhibition and what makes your project so unique?

Dmitry Bogachuk: The selection of artists was based on the contribution of each of them to the development of photography, the representation of Ukraine on the international scene, but most importantly - the integrity of projects and their general cultural significance.

Initially, we wrote a list of artists whom we wanted to include in the main exhibition. After we have chosen and discussed the series and individual works we want to present at the exhibition, we determined the theme that connects the work of all the artists - in our case it is a person, a personality, an individuality.

AD: Many of the artists have long been living abroad. Is their work still in demand in Ukraine?

Dmitry Bogachuk: Sure, it is always in demand, perhaps not yet commercially, since in Ukraine  the market of collectible photography is only beginning to take shape, but this is a matter of time. The artists shown at the exhibition are always referred to, they are always welcome here, with lectures and exhibitions - as they are the engine of Ukrainian culture. Our strategic goal is to attract additional attention to photography in Ukraine, which in the future will provide a comfortable climate for Ukrainian artists living abroad and will affect their interest to show their work in Ukraine on an ongoing basis.

AD: Exhibition "Ukrainian archetype" is quite an ambitious project and, in a way, a summary of the achievements in Ukrainian photography, as well as a heritage for young authors. What purpose did you personally pursue in this exhibition?

Dmitry Bogachuk: Yes, this is some kind of a summary. There is nothing ambitious - it is a desire to define the concept of "Ukrainian photography" for viewers and young artists, and empathize the number of topics that have been studied and reinterpreted.

We try to look at photography in terms of possibility of creating a market in Ukraine, and consider it as a separate discipline, as an interethnic phenomenon. Our first photo fair we want to devote to Ukraine and Ukrainian photography.

Our culture and photography in particular are very original. The value and contribution of each artist to the overall cultural process is considerable and highly appreciated to a greater extent outside of Ukraine. My goal as an exhibition curator is to ensure the interest of the Ukrainian public and eradicate the concept of "no man is a prophet in his own country ", to outline the framework of "Ukrainian photography" and in the future to institutionalize this concept. At the exhibition, the viewer will be able to see how young and older artists, including Arthur Bondar, Sergei Bratkov, Igor Gaidai, Alexander Glyadelov, Kirill Golovchenko, Maxim Dondyuk, Sasha Kurmaz, Viktor Marushchenko, Sasha Maslov, Sergei Melnichenko, Mikhail Pedan, Vyacheslav Polyakov, Roman Pyatkovka, Arsen Savadov, Victoria Sorochinski, Alexander Chekmenev, Nikita Shalenny, Shilo (group) form the anthology of "Ukrainian photography".  And the exhibition is a guide for the Ukrainian audience, which determines the public domain, a layer of culture, which for unexplained reasons is neither understood nor recognized in Ukraine. Each artist is unique, each has his or her own vision and sense of archetype, and these different views unite all participants of the exhibition.