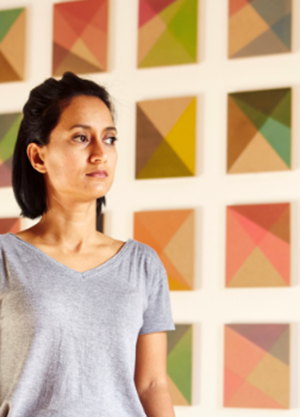 The Abraaj Group, working as a strategic parter with Art Dubai 2017, is a leading private equity investor, created for operating in the growth markets of Africa, Asia, Latin America, the Middle East, and Turkey and supporting art and innovation, entrepreneurship and the next generation.

The Abraaj Group, working as a strategic parter with Art Dubai 2017, is a leading private equity investor, created for operating in the growth markets of Africa, Asia, Latin America, the Middle East, and Turkey and supporting art and innovation, entrepreneurship and the next generation.

In 2008 the Abraaj Group Art Prize was founded and is now in its ninth edition. The aim of the prize is to empower potential and give often under-represented contemporary artists the resources to further develop their talent. Following the application and jury process, four artists are shortlisted for the prize and one (of the four) artists is awarded the $100,000 commission.

Rana Begum was born in Bangladesh in 1977, now lives and works in London. In 1999, she graduated with a BA in Fine Art from Chelsea College of Art and Design and, in 2002, gained an MFA in Painting from Slade School of Fine Art. Recent and forthcoming exhibitions include; The Space Between, Parasol Unit (2016) Into boundless space I leap, Maxwell Centre, UK (2016); 11th Gwangju Biennale, Korea (2016); Solo Show, Galerie Christian Lethert, Cologne, Germany (2016). She has also participated in many international group exhibitions, including: New Visions, Tensta Konsthal, Stockholm, Sweden (2016); Geometries of Difference, Samuel Dorsky Museum of Art, New York, USA (2015); The Language of Human Consciousness, Athr Gallery, Jeddah, Saudi Arabia (2014); Summer Show, The Third Line, Dubai, UAE (2014); Summer Exhibition, Royal Academy of Arts, London, UK (2012) where she received the Jack Goldhill Award for Sculpture.