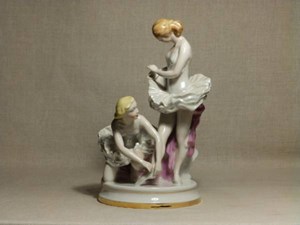 Following the recent revelation that Jeff Koons had used the work of a Ukrainian artist for the basis of his widely acclaimed inflatable sculpture at the Rockefeller Centre, Artdependence can reveal that a second piece of derivative work has been uncovered amongst Koons’ Antiquities series.

Following the recent revelation that Jeff Koons had used the work of a Ukrainian artist for the basis of his widely acclaimed inflatable sculpture at the Rockefeller Centre, Artdependence can reveal that a second piece of derivative work has been uncovered amongst Koons’ Antiquities series.

Artdependence reached out to Jeff Koons LLC for comment. They responded, commenting: “We are aware of Oksana Zhnikrup’s work and have a license to use it for Mr Koons’ work”. The announcement has sparked widespread debate about the ethics of accreditation and licensing.

Artdependence have also spoken with Oksana Zhnikrup’s grandson who has confirmed that his mother was approached by Jeff Koons’ team and offered a licensing agreement for two porcelain sculptures. Zhnikrup produced the sculptures whilst working at the Kiev Experimental Ceramic and Art Factory, which closed its doors in 2006.

It now appears that the second Zhnikrup sculpture licensed by Koons’ team has also been used as a basis for the artist’s work. Koons’ piece, a sculpture cast in mirror-polished stainless steel with transparent colour coating, is simply titled ‘Ballerinas’ and is almost identical in detail to a second porcelain sculpture from Oksana Zhnikrup.

Both pieces depict two ballerinas who appear to be preparing for a performance. One blond-haired ballerina is stooping to adjust the shoe of her companion, a dark-haired ballerina, who appears to be adjusting her tutu. In both pieces, the ballerinas are supported by a floating piece of pink cloth. It has not yet been confirmed whether this second sculpture from Zhnikrup is the same statue that fell under the initial licensing agreement.