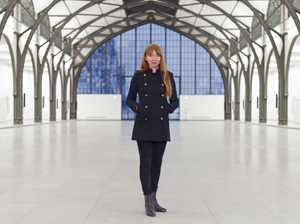 Susan Philipsz (born in 1965, Scotland) is an artist, who initially started as a sculptor, and is now best known for her sound installations.

Susan Philipsz (born in 1965, Scotland) is an artist, who initially started as a sculptor, and is now best known for her sound installations. Despite this, she doesn't like to be referred to as a sound artist, since it limits her oeuvre solely to sound art. Susan likes to work with spaces, stories, memories and sounds, or course. At the ongoing exhibition at Tanya Bonakdar Gallery Susan Philipsz shows her multi channel sound installation accompanied by a series of large-scale screen prints. The installation tells us a story of Hanns Eisler, Austrian composer, who, after being banned by the Nazi regime, fled to the United States, and later on had to be deported back to Europe for suspected communist activity. Find out more about sounds and their place in Susan’s artwork in the interview with Artdependence Magazine.

Artdependence Magazine: Dear Susan, you studied sculpture at Duncan of Jordanstone College of Art in Dundee, Scotland. How and why did you start working with sound?

Susan Philipsz: When I was studying in Dundee I used to make solid physical sculptures that explored inner body space but I don’t think any of them exist anymore. It did help me to think about the process and the changes that your body goes through to produce sounds. I became aware of the movements of my own inner body space especially when I was singing; the physicality of breathing, the way the diaphragm moves to expel breadth from your lungs when you sing. I also began to think about the physicality of projecting my voice out into a space and filling that space with sound. It was during my MA in Belfast that I began to record my own voice.

AD: Winning the 2010 Turner prize was, of course, a major step in your career, and for the acceptance of sound as a medium of art. What is sound to you?

SP: Sound has always been my primary tool and I have been practicing for many years but one of the stranger things that has happened to me since winning the Turner Prize is that people now refer to me as a sound artist. Before that I was an artist, like any other artist and I would participate in group shows and biennials with other artists where there is no discrimination between an artist who works with film or photography or paint or any other medium. However recently I have been asked more and more to be in sound art exhibitions, where the only common element between the artists is that they work with sound. These are very limiting criteria and you usually get a very mixed bag of artists. In time I think people will stop using the term sound art and I can go back to being a normal artist again. That would be nice.

SP: I think the best way to think about installation is to focus less on the artwork as an object and to be concerned with the space that the work is placed within. That space can be a museum space or a outdoor public space, but the experience of the work takes the work and the whole space into consideration. The British conceptual artist John Latham said “Context is half the work” and that was a very important idea to me when I began to exhibit. A sound installation is no different from any other installation.

AD: Tell us, please, a bit about the exhibition at Tanya Bonakdar Gallery that opened yesterdey?

SP: The work is called Part File Score, and it was first presented at the Hamburger Bahnhof in Berlin in 2014. It is a multi channel sound installation accompanied by a series of large-scale screen prints. The sound component of Part File Score is based on three of Eisler's musical compositions for early motion pictures: Prelude in the Form of a Passacaglia (1926), which accompanied Walter Ruttmann's pioneering early abstract animation titled Opus III (1924), Fourteen Ways to Describe Rain (1941) which responded to Joris Ivens film Regen (1929), and Septet No.2 (1947) which was originally commissioned by Charlie Chaplin for his film The Circus (1928), though the composition was interrupted by Eisler's deportation from the United States for suspected communist activity.  I have deconstructed each of these musical compositions, isolating each distinct note on its own speaker to create a constellation of tones that fills the gallery. The series of prints that accompanies the immersive sound element tells the story of Eisler's musical development alongside the United States' growing suspicion of Eisler's perceived communist activity.  The FBI files are amazing to look at. There is hardly a page where the typewritten reports are not either overwritten or deleted in black marker. It illustrates the paranoia that was at the root of the investigation, that Eisler was an active communist agent operating at the heart of the Hollywood dream factory, a theme that is eerily relevant in an age of renewed government surveillance.

AD: Do you compose your own music?

SP: No, I usually work with pre existing forms, everything from the history of music and film to FBI files. I am particularly interested in the emotive and psychological properties of sound and how it can be used as a device to alter individual consciousness.

AD: What is the source of your inspiration?

SP: For this exhibition I became fascinated by the generation of émigré artists who fled Germany for America in the 30’s. I was particularly interested in the composer Hanns Eisler. It was Eisler’s tale of flight from Germany in the 30’s and his subsequent deportation from the United States by the House Committee on Un-American Activities in 1948 that I found particularly moving.

AD: Can you explain the difference in how the public reacts on sound at a concert and sound as an art form?

SP: When you listen to music at home or at a concert, you can be transported by the music, it can take you away. When you listen to my installations, you become very much aware of the space you’re in and yourself in that space. It’s a simultaneous experience of being with the sound but also grounded in the present. Especially when the work is placed in a gritty urban setting, you’re prevented from fully entering into a state of reverie. You can become aware of how the sound defines the architecture and draws attention to it in a new way.

AD: What are your future plans?

SP: I keep on saying once I get these exhibitions out of the way I’ll have some time to myself to develop new work and it never happens. But this year I think it will be different. I have solo exhibitions at Konrad Fischer Galerie, Hauser & Wirth Somerset, Kunsthistorisches Museum Vienna, Villa Croce, Genoa and new work to make for large group exhibitions in Kyoto and Istanbul but at the end of all that I have a residency in Los Angeles from October until the end of 2015. I will stay at the Villa Aurora, a building that used to be the residence of Leon Feuchtwanger. Feuchtwanger was very important in helping other émigrés find their feet in 1930’s Los Angeles. I’m really looking forward to that and I plan to make the journey from Berlin to Los Angeles, to walk in the émigrés footsteps as it were, to experience the surroundings, the theatres, libraries and cinemas of the city in order to get an idea of how hard it would have been for Eisler to leave Los Angeles and return to Germany in the late 40’s.

AD: We wish you a great exhibition at Tanya Bonakdar Gallery!