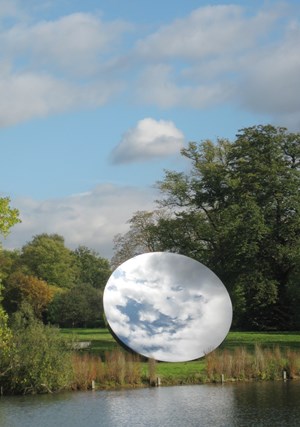 Mirrors have always taken a prominent and symbolic role in myth and fairytale. Narcissus fell in love with his own reflection in the mirror of a still lake, whilst the wicked stepmother would ask her mirror to flatter her with her famous line ‘mirror, mirror on the wall…”

Born in Bombay in 1954, Anish Kapoor moved to Britain in the 1970s in order to study at the Hornsey College of Art. He has spent most of his life in the UK.

In 1978 he participated in a group exhibition of the ‘New British Sculpture movement’ at the Hayward Gallery in London. The young sculptors were gaining critical attention as they broke away from the minimalist tradition and began to experiment with different forms. Kapoor’s began to gain critical acclaim and he continued to hone his unique style and aesthetic. During the course of the 80’s, his reputation grew, gathering him an army of fans and a wave of new commissions and exhitions.

In the early 90’s, Kapoor had begun experimenting with new materials and shapes, moving away from the stone and resin that had characterised his work up to that point. Steel and other reflective materials began to make an appearance in his work. His sculptures began to integrate and morph into their surroundings, mimicking natural shapes whilst somehow defying the boundaries of any solid container.

In 1990 Kapoor represented Britain at the Venice Biennale and was awarded the Premio Duemila Prize. His show, Void Field, included a grid of sandstone blocks. Just one year later, in 1991, Kapoor was awarded the Turner Prize.

His later work expresses an exploration of what he refers to as ‘the void’. His biomorphic forms appear to defy the physical space in which they exist.

As a mature artist, Kapoor produces sculptures for both indoor and outdoor spaces. With elements of Modernism and an embrace of manipulated, organic forms that use elements of both art and design, his work is often said to produce meditative or serene atmospheres.

Perhaps Kapoor’s best known work, Cloud Gate is a 110 tonne steel sculpture that was created for Chicago’s Millennium Park in 2006. The smooth surfaces of the piece appear to twist and stretch around the concrete, reflecting the looming windows of the surrounding skyscrapers and picking up on the reflective surfaces city’s beautiful waterways and lakeshore. In the same year, Kapoor created a work titled Sky Mirror for the Rockefeller Centre in New York. It featured a 35-foot concave mirror.

Mirrors have always taken a prominent and symbolic role in myth and fairytale. Narcissus fell in love with his own reflection in the mirror of a still lake, whilst the wicked stepmother would ask her mirror to flatter her with her famous line ‘mirror, mirror on the wall…”

Scientifically, mirrors reflect light, but the reason for the fascination with the emblem of the mirror is that it reflects the world around us, showing us the image of a world that looks at once familiar, and at once different. Represented on a flat surface, the reflected world is haunting in its honesty. In many myths and legends, mirrors have represented a vortex into a parallel world or an alternative reality.

Several stories and Hollywood films have included storylines about passing through the mirror and stepping into another world, but in reality, mirrored surfaces do not allow us to escape from ourselves. When Kapoor uses a mirror in his work of art, he is bringing the viewer into the work, removing the possibility of using art as an escape. You cannot be a passive observer when viewing a mirrored artwork.

For Kapoor, whose work plays with the boundary of solid form, of the art world and the everyday world, mirrored surfaces represent the perfect reminder or our own place in the art world. With soft, curved surfaces and biomorphic twists, his Cloud Gate work draws hundreds of visitors every day, all ready to snap a photograph of their distorted image in the shiny surface of the giant sculpture and to watch their identity morph and adapt as they move around the object. Kapoor’s use of the mirror is at once personal and at the same time disorientating. We literally see ourselves in his work, but not as we have seen ourselves before. His work invites us to touch, to feel and to experience a different world, a world which is unique to us and simultaneously shared with those around us. Kapoor literally holds up a mirror to the complexity of our understanding of our identity and our place in the world.