Symbolism in Art: Frida Kahlo – Self Portrait with Monkey 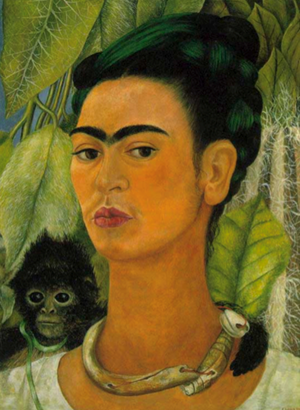 “I paint myself because I’m so often alone and because I am the subject I know best,” Frida Kahlo. Born and raised in Mexico to a German father and a Pacific Islander mother, Frida Kahlo (1907-1954) has become known for her self-portraiture and her unique painting style. Combining elements of traditional Mexican folk art, she studies every detail of her physique and transcends normalised structures of beauty.

“I paint myself because I’m so often alone and because I am the subject I know best,” Frida Kahlo.

Born and raised in Mexico to a German father and a Pacific Islander mother, Frida Kahlo (1907-1954) has become known for her self-portraiture and her unique painting style. Combining elements of traditional Mexican folk art, she studies every detail of her physique and transcends normalised structures of beauty.

In her youth, Kahlo showed great academic promise. At the age of 18 she was planning to attend higher education and become a medic, but her fate was rapidly altered after a life-changing traffic accident in which she was hit by a bus.

During her recovery she began to explore art – a childhood hobby which entertained her mind as her body struggled to return to normality. Quickly, she found that her art was a release from her daily struggle and she began to cement her own unique style, teaching herself through experimentation and personal study. Her work didn’t rise to prominence until after her death. In the 1970s her work began to gain public attention and became iconic amongst feminist circles who applaud her exploration of the female experience. Over the last few decades, her works have continued to gain widespread acclaim and appreciation.

Kahlo was considered to be a part of the Mecianidad movement. An arts movement which sought define an identity for Mexico. She is often referred to as a Surrealist.

In 1929 Kahlo wed communist muralist Diego Rivera. Their marriage was tumultuous and in 1939, following a series of affairs on both sides, they divorced, only to remarry again a year later. Their relationship was tempestuous and unpredictable throughout. Kahlo was known to suffer from periods of great depression. Due to injuries sustained in the bus accident, she found herself unable to bear children and suffered a series of devastating miscarriages.

Instead, Kahlo turned her attention to animals and kept a variety of exotic and domestic pets. Amongst them were her pet spider monkeys, gifted by her husband, which she kept in the garden of her home. She was known to refer to them as symbols of the children she was never able to bear.

Of her 143 self-portraits, 55 include Kahlo’s pets. It is as though she saw them as an extension of her own self and being. Spider monkeys are known to have long, spindly legs and arms that look almost disproportionate to their body. Their strange appearance may have reflected Kahlo’s own discomfort with her physical body. Having contracted polio at an early age, she had one leg that was thinner than the other. She used colourful, large skirts to cover the disfigurement.

Kahlo doted on her pet monkeys. In her self-portraits, they are often shown sitting close to her, physically enfolding or grasping her in some way. They appear to be protective, friendly and gentle.

In many cultures, monkeys are used to symbolise lascivious, or primal behaviour. They are a mirror image of man, reminding him of his animal nature and close proximity to the natural world. Through monkeys, man sees his own connection to the animal kingdom with its uncontrollable, primal urges. In renaissance art, fettered monkeys were often used to symbolize men who are entrapped or bound by their desires.

In Kahlo’s paintings, monkeys do not appear in this way. They are more gentle, child-like and tender. Partially due to their wild natures, monkeys are often associated with fertility or lust in Mexican mythology. Kahlo’s trust and connection with her pets may have been in part due to her own feelings of inadequacy and frustration around her inability to carry to children. One of the reasons feminists celebrate Kahlo’s work is her unabashed claim to her own sexuality. She was not afraid to acknowledge her own sexual feelings or desires.

In Kahlo’s painting, the monkeys appear loyal. It feels as though Kahlo is connected with the creatures in some way. There is a bond there. Never the less, the monkeys also often appear by Kahlo’s shoulder or back, reflecting the image of a ‘monkey on your back’, a phrase commonly used to describe a problem or burden of some kind. With their association with animal nature, disfigured or primal humanity and lascivious primal urges, Kahlo may have felt at once supported by and burdened by her connection to her animal ancestors.