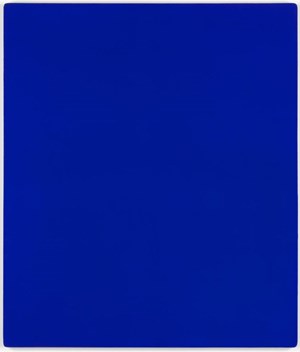 In 1947 Klein and two of his friends decided to play a game in which they divided up the world between them. One young man decided to take the animal kingdom, and one the province of the plants. Klein opted for the mineral realm, gazing up to the sky and proclaiming, “the blue sky is my first artwork”.

Born to two artist parents, Yves Klein (1928-1962) is a post war French artist and one of the leaders of the Nouveau realism movement. Alongside his minimalist paintings, he was also known as a great performance artist and showman. He was widely applauded for this creativity and ability to create strong conceptual works. He embraced painting, sculpture, theatre, installation and performance.

During his younger years, Klein was a prolific traveller. He had practiced the art of judo from a young age, and at the age of 25 he travelled to Japan where he became a judo master and black belt. He also studied Zen Buddhism – the art of clearing your mind of all thoughts. It’s possible that this mastery of the mind went on to influence his artistic style.

Klein painted several monochromes during his career, but the first time the work caught the public attention was following his publication of Yves Peintures, a book that parodied art gallery catalogues. It featured a series of monochrome paintings in a variety of colours, each linked to his memories of a particular city he had spent time in. Klein was disappointed by the public reception to the works, feeling that it was received as pretty decorations to brighten up people’s interiors. In order to rectify this, Klein decided to focus solely on one colour in his next phase of work. Thus, his love of aquamarine blue was born.

Allegedly, in 1947 Klein and two of his friends decided to play a game in which they divided up the world between them. One young man decided to take the animal kingdom, and one the province of the plants. Klein opted for the mineral realm, gazing up to the sky and proclaiming, “the blue sky is my first artwork”.

In 1957 Klein staged a show at the Gallery Apollinaire in Milan. It featured 11 almost identical blue canvases. Showing his flair for showmanship, Klein released 1001 blue helium balloons to coincide with the opening. Although the canvases looked identical, Klein had experimented with different techniques for applying the paint including sponges and rollers. Critics and buyers were unanimous in their appreciation for the show. It later toured to Dusseldorf, London and Paris and Klein’s famous blue became a symbol of a new kind of art.

Klein worked with Parisian paint dealer Edouard Adam to find a way to use the ultramarine paint suspended in a synthetic resin. Previously, painters had used the pigment in linseed oil, which caused it to become dull. The striking blue colour created by this technique is now often referred to as International Klein Blue.

In 1958 Klein staged his next exhibition at the Iris Clert Gallery. The exhibition was titled La spécialisation de la sensibilité à l’état matière première en sensibilité picturale stabilisée, Le Vide (The Specialization of Sensibility in the Raw Material State into Stabilized Pictorial Sensibility, The Void). Within the exhibition space Klein displayed almost nothing at all. He left he walls bare and installed a large cabinet, also painted white, from which he emerged on the opening night, making a theatrical entrance. The window of the gallery was painted blue and a blue curtain hung in the entrance hall. Blue cocktails were also served. Due to a publicity overload, 2500 people turned up and had to be dispersed by the police.

Klein’s work has occasionally been overlooked by institutions in favour of later minimalist work, but his unique pieces are starting to gain appreciation. In 2006 the Centre Pompidou in Paris staged a ful retrospective of his work. There is a growing recognition of the ways he challenged conventional institutions and played with the art establishment.

Beyond his self-named mastery over the minerals of the earth, little is known about exactly why Klein chose to work with this particular shade of blue. Blue tones are often associated with calmness and relaxation. Blue is thought to have a calming influence on the mind. Historically, blue is often connected with loyalty, security, wisdom and trust. It also has associations with masculinity and new born boys. Conversely, people also talk about ‘having the blues’, referring to feelings of depression and hopelessness. But Klein’s blue isn’t necessarily tranquil or hopeless. Reminiscent of the young man looking up at the sky, Klein’s chosen shade seems to echo ‘the void’ of the expansive blue sky, embracing empty space and endless potential.

Perhaps we can better understand Klein’s colour choice by looking at the context in which he was working. In the wake of World War II, Europe was staring into the barrel of a new page in history. With so much loss and devastation, a new era was calling and artists were free of existing paradigms as Europe looked towards the new. Klein’s bright, empty canvases seemed to move beyond expressionism. With the threat of nuclear holocaust still hanging in the air and the dust barely settled, the idea of staring into the ‘void’ was very real indeed.

Klein once said “We absolutely must realise – and this is no exaggeration – that we are living in the atomic age, where all physical matter can vanish from one day to the next to surrender its place to what we can envision as the most abstract.” With Klein’s blue canvases he seemed to call the earth down into our daily realm – pulling the expansive and all-encompassing sky down to meet us on the Earth – and, lost in the beauty and the spectacle of it, the public fell in love with it.

Yves Klein (1928–1962), IKB 79. Paint on canvas on plywood, 1397 x 1197 x 32 mm, frame: 1600 x 1394 x 80 mm. COLLECTION: Tate, purchased 1972.  © ADAGP, Paris and DACS, London 2017
By Kitty Jackson
Kitty Jackson has worked as an arts journalist and writer for more than 10 years. She began her career as an Editorial Assistant at WhatsOnStage.com before moving to IdeasTap to become Assistant Editor. After four years Kitty moved towards digital content and began working with leading PR firm PHA Media, helping them to establish a digital department before moving to iProspect, where she was embedded within the digital content team creating content for leading brands including The Body Shop, Thomas Cook and British Gas. Kitty is now excited to return to the world of arts journalism at ArtDependence.