Symbolism of the Pitchfork in Grant Wood’s American Gothic 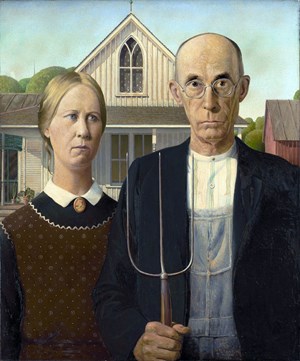 American artist Grant DeVoloson Wood, usually known as Grant Wood, is best known for his work depicting images of the American Midwest. The painting that made him famous is his depiction of an Iowan famer and his stern-looking daughter, standing rigid in front of the gothic window of their white, wooden home.

American artist Grant DeVoloson Wood, usually known as Grant Wood, is best known for his work depicting images of the American Midwest. The painting that made him famous is his depiction of an Iowan famer and his stern-looking daughter, standing rigid in front of the gothic window of their white, wooden home. American Gothic has become truly iconic around the world and is often parodied and recreated in popular culture. Over the years it has been referred to as kitsch and camp and is often viewed as mildly humorous.

Born in rural Iowa, Grant showed an early interest in the act of creation with an apprenticeship at a local metal shop. After high school, he enrolled at an art school in Minneapolis known as The Handicraft Guild. In 1913, Grant enrolled at the School of Art in Chicago. 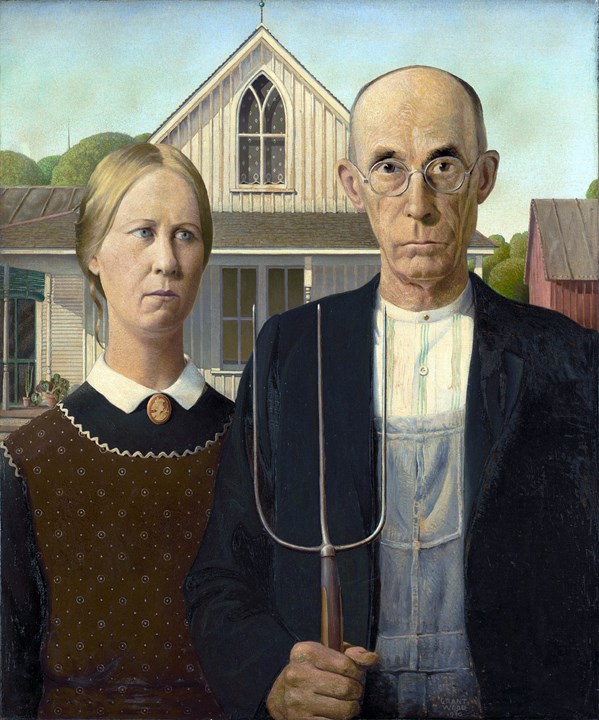 Wood’s work is often referred to as ‘Regionalism’, a movement of painting that was largely found in the Midwest. It went against European fashions for abstraction and produced strong figurative portraits.

Wood made a number of trips to Europe to study the European style of painting. He was interested in learning more about impressionism and post-impressionism and was particularly influenced by the work of Flemish painter Jan van Eyck. He enjoyed learning about the fine detailing of Flemish realism and learnt to control his brushstrokes meticulously to capture his subjects in their truest form.

Wood worked in a variety of mediums, including charcoal, wood, metal and ceramics. During is life he also used his talents in a number of commercial jobs, from drawing advertisements to designing wallpaper.

American Gothic was first displayed at the Art Institute of Chicago in 1930 and is still found there today. When it was first displayed, many critics took it to be a commentary on the repression and austerity of rural life in America.

The painting was inspired by a house that Wood saw in southern Iowa. The house can be seen in the background of the painting. Wood then sought out models (his dentist and his sister) to represent the type of person he imagined would live in such a home. The spikes of the three-pronged pitchfork are at the centre of the painting.

The figures in the painting have exaggerated long features, reflecting the long gothic window that can be seen behind them. For many people, the exaggerated faces and expressions of the subjects of the painting seem to present a kind of satire of rural American life. It is speculated that Iowans did not take kindly to the image, many expressing severe distaste for the way it represented Iowan life.

Wood never clarified whether the image was meant to be sincere or satirising. During his life he made a number of confusing statements in answer to the question. “There is satire in it,” he said, “but only as there is satire in any realistic statement”.

The pitchfork sits at the very centre of the piece, with white tips glinting back at us from between the two protagonists. As a symbol of farming culture, a rake would have seemed the obvious choice, but Wood’s use of a pitchfork feels much more potent.

The three-pronged spear can be viewed as a symbol of hard labour and hard work. It seems to play with the American idea of the self-made man and the American Dream. Those who work hard will reap the rewards. The human subjects of this painting appear to be standing against a rich background of trees, with their gothic-style home over their shoulder. But judging by their expressions, they do not seem to be living a fulfilled or joyful life. There is an austerity in the painting and its depiction of working class people in 1930s America.

The pitchfork stands between the viewer and the subjects of the painting and mirrors back their long, spindly forms. But we cannot ignore the fact that the gaze of the viewer also reflects and mimics the cold glare of the farmer and his daughter. The pitchfork is almost a third character in the image, intervening between subject and viewer and creating a thin, hostile divide.

There are also other ways to interpret this image. When Wood created this painting, the great depression was depriving many Americans of basic goods. The pitchfork seems to suggest a steadfastness and determination. A will to work hard and persevere.

The pitchfork is a richly symbolic item. Referred to as a trident in Greek mythology, it was the symbol of the mighty Poseidon, god of the sea. In Christianity the pitchfork came to be associated with the Devil and with wicked activity. It is still often seen on Halloween as a symbol of dark forces. The pitchfork does not appear in the bible, but it is thought that priests used the image of a Devil with a three-pronged fork as a familiar image for farming families who attended church. Thanks to its associated with godly forces, the pitchfork or trident is often associated with mischief, defiance and darkness.

But this is not the case universally. In the Hindu faith, the trident, or trishul, is a three pronged spear that is symbolically used to ward off evil, whilst in Buddhist thought, the trident is linked to the quest for the right knowledge or conduct.

Pitchforks are regularly used on Midwestern farms to pick up chaff after it has been separated from wheat. In American Gothic, the pitchfork seems to signal a boundary, a hostile divide between viewer and subject. It seems to speak of hard work, grit and a certain degree of danger – a harshness to an environment that appears at first, pleasant, serene. It is unclear whether Wood intended to satirise Iowan values or to capture a way of life, but in either account, the figure of the pitchfork is central to the painting and to the atmosphere Wood attempted to create.