“The thing is real. Ed Ruscha did create a mysterious art piece…” - Gregoire Gensollen on ‘Where is Rocky II?’ 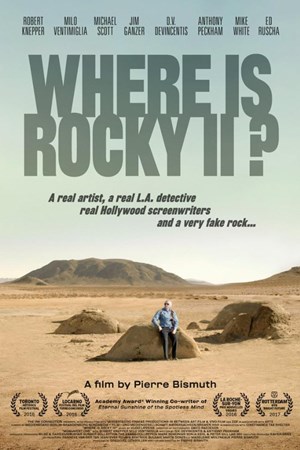 Gregoire Gensollen has a host of major Hollywood titles under his belt, but his latest film production, ‘Where is Rocky II?’ (2016) takes him in a new direction. A documentary, a comedy and a mystery, all rolled in to one, the film documents the 10-year hunt for a mysterious ‘fake rock’ - a piece of art created by American artist Ed Ruscha in 1979 and deposited in an unknown location somewhere in the vast Californian desert.

Gregoire Gensollen has a host of major Hollywood titles under his belt, but his latest film production, ‘Where is Rocky II?’ (2016) takes him in a new direction. A documentary, a comedy and a mystery, all rolled in to one, the film documents the 10-year hunt for a mysterious ‘fake rock’ - a piece of art created by American artist Ed Ruscha in 1979 and deposited in an unknown location somewhere in the vast Californian desert.

Now, almost 40-years later, artist and filmmaker Pierre Bismuth is on the search for the elusive boulder, and he’s bringing a private detective and two talented Hollywood screenwriters along with him. Artdependence magazine had an opportunity to talk to the film’s producer Gregoire Gensollen about the documentary and the incredible story behind it.

Artdependence Magazine: Is this a true story? Is it a documentary or a work of fiction?

Gregoire Gensollen: The thing is real. Ed Ruscha did create a mysterious art piece, a fake rock, and it remains hidden in the desert to this day. Nobody knows the location. As for our film, we call it a “fake fiction” to be more exact. When I started working on this project we found out that nobody in the art world, even in Los Angeles Contemporary Art Museum, where they have a personal relationship with Ed Ruscha, have ever heard of this piece. It’s very intriguing and mysterious. This is what Pierre wanted to accentuate in his movie. It’s a kind of absurd investigation.

AD: How did you become a producer of “Where is Rocky II?”?

GG: I’ve known Pierre Bismuth, the director of the film, for many years. We met around 2003 and since that time we’ve stayed touch. In 2006 he told me he wanted to create a feature film about a rock made by the acclaimed artist Ed Ruscha. At that time he was working with another producer on the project. It was clear that he was struggling to get the project off the ground. In 2012 I found myself in a better position to help, so I started diving into more details about the film. I realised that he needed to shoot a pilot and try to find a private detector to start investigation. Mojave desert. So that was it, we headed to the Mojave Desert and started looking at finances.

GG: Actually, this will partly explain why I started working on this project: my parents have collected contemporary art for more than 35 years. They have a particular interest in conceptual art and keep a collection of work in Marseille, South of France. They have some pieces from Pierre Bismuth. That was how we originally met. I’m very interested in producing films from contemporary artists. I have worked on several film and television projects in Hollywood and I was always very interested in including contemporary art in my projects.

AD: I’ve heard that you’re involved in producing series for virtual reality and digital media. Will they be connected to art in some way?

GG: Possibly. I’m not able to give any details at the moment but I will say that I have met with someone who is working on a very interesting project that relates to the art world. I have expressed my interest. I have a kind of dual life: I work full time for a very well established Hollywood producer and I am also looking at bringing in virtual reality, and then I also have my own production company.

AD: Do you see your career taking a different direction in the future?

GG: I love challenges. I love discovering new horizons and fresh ideas and I like working with creative people. I very much enjoy what I’m doing right now, but of course I have ambitions and desires. There are still a lot of things I want to achieve in my career. There are two things I am particularly interested in right now. The first is an animation project I am involved in at the moment which I hope will appeal to both adults and younger members of the public. It’s about the last three pandas on Earth. The second interest is virtual reality. It is extremely exciting to be part of this new medium, possibilities are infinite.