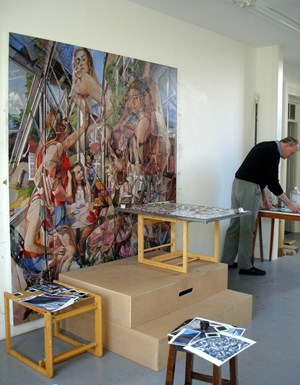 Clive Head, one of the leading British painters of his generation, is recognized for his urban realist paintings, which depict the common urban environment, like entrances to the London Underground or the scene of a simple café, as well as cityscapes from some the most well known destinations in the world like New York, Moscow, Prague, Rome, Paris, and, of course, his favorite city London.

Clive Head, one of the leading British painters of his generation, is recognized for his urban realist paintings, which depict  the common urban environment, like entrances to the London Underground or the scene of a simple café, as well as cityscapes from some the most well known destinations in the world like New York, Moscow, Prague, Rome, Paris, and, of course, his favorite city London.

His paintings are often compared to photographs. However, Head underlines that paintings go beyond presenting the visual appearance of the world, and that sensual experience plays an even a bigger role in their perception. Although sketching, photographing or simply experiencing the scene are part of the process of creating a work, you will never find this angle in reality, which will encompass everything seen in the painting. It is the atmosphere and the live sprit in the works that make every scene appear to vibrate with the city’s noises. The viewers will find themselves inside the painting and at the same time looking at it through a window as if in another reality. “Photo deals with the split second, painting deals with all that you have been, all you have felt, all you have seen, it’s all condensed into one painting” – in other words: in a new world created by Clive Head. With a background as an art teacher, Clive Head has a well-developed ability to talk about his work. Here is our interview - enjoy!

Artdependence Magazine: Do your paintings present what is for you an ideal version of the world, or do they show the reality? Do you add your own personal elements to them?

Clive Head: All my work begins with an experience of being in the world. That experience can be of visiting friends in London or being with my family at home. But that is just a beginning and what I seek through painting is a resolution of experience as an alternative reality. You could describe it as an ideal, though I am not interested in a classical idealism where everything is ordered in a very geometric and polished manner. I am more concerned with hyper-complex sequences which verge on the chaotic. My work is very instinctive and doesn’t conform to known rules of picture-making.

My work is personal on all levels. I am concerned with my interaction with the world, not a shared experience. That is why, although I use the camera as a tool to collect information, as well as draw on location, I am not interested in reproducing a mechanical image. My drawing is inventive and my painting based on my unique mark-making. It is at this fundamental level, that my painting is personal. 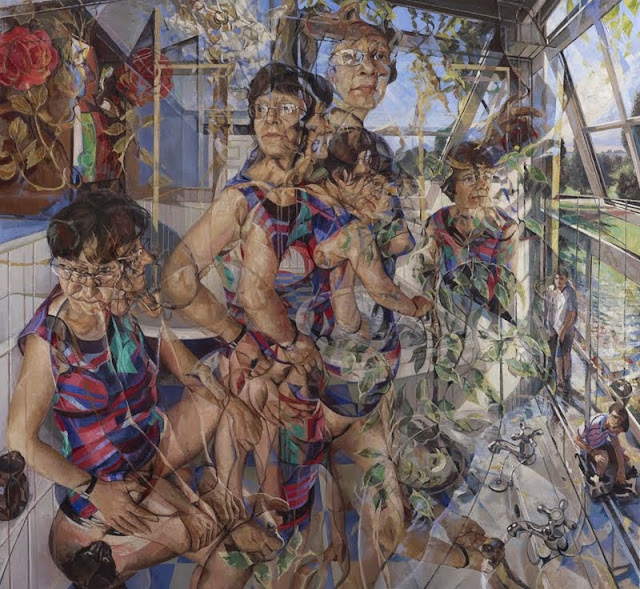 AD: Can we say your work is hyper-realistic, almost photography?

CH: I am not sure how useful terms like hyperrealist are? I am certainly concerned with the challenge of reality, far more than the imitation of reality. There has been a lot of confusion in the way my work is understood because some of my paintings, when seen at a glance and in reproduction, remind people of photography, but I am not interested in this kind of illusion.

Many of my recent paintings have made my position far clearer, though I have never been interested in photorealism. “Wash Day with Actaeon” (2014), for example, has a multiplicity of spaces and events, which keep forming and dispersing. The appearance of this painting may be very different from a cafe painting like “Thinking about Georges Braque”, finished earlier in 2014, but they share similar concerns. The cafe painting is more seamless but I don’t think this makes it any more photographic. Both paintings have been invented in the studio. You couldn’t stand in one spot and seewhat I have painted, although you would be able to find some of the different objects and people.

The camera offers a very limited means to document our world. Though I am not concerned with documentation as such, through painting I can deal with my movement through the world and over time. It is a lot more flexible, accommodating and personal than photography. Painting and photography are very different. I think my paintings highlight many of those differences whilst still being aware of lens-based media. Up close, my paintings have always been very painterly. The detail from “Table Dance as the Network Stops”(det4) is typical. 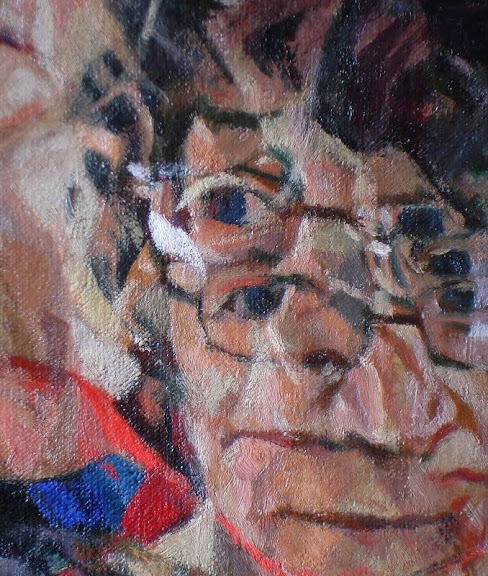 Detail from Table Dance as the Network Stops, courtesy the artist

AD: Do your paintings express a particular opinion, do they contain a social layer?

CH: The paintings develop over many months, some times years, yet I establish an image on the canvas very early on, and from the start that might express my interests and observations. You could describe that as an opinion. But, I think the activity of painting to find a work of art, is a process where we begin with life, (saying something about life) and resolving that to find something that is autonomous. It is a journey whereby I end up having nothing to say, because reality is replaced with a unique subject that has its own identity. In this, I think painting is the very opposite of illustration. Of course that doesn’t stop an audience interpreting my paintings as a chunk of reality and seeing a social layer, but that would be to miss the point of painting as art.

AD: Is hyper-realistic painting having a comeback?

CH: When I first started showing urban landscapes in London in the 1990s, there was very little hyperrealist painting around. You had to go to New York to see this kind of painting, and it was concentrated in a few galleries. Now there are so many photo-realists and hyper-realists all over the world, so you could say that it is enjoying a flourish. But actually, in my opinion, there is very little that compares with the innovation of the first generation of photo-realists. I don’t know of anyone else who works the way that I do, so in many respects I feel quite isolated. That said, I do have younger painters visiting me in my studio, who really want to break from the mechanical limitations of photo-realism, so I think we are on the verge of seeing some interesting developments. 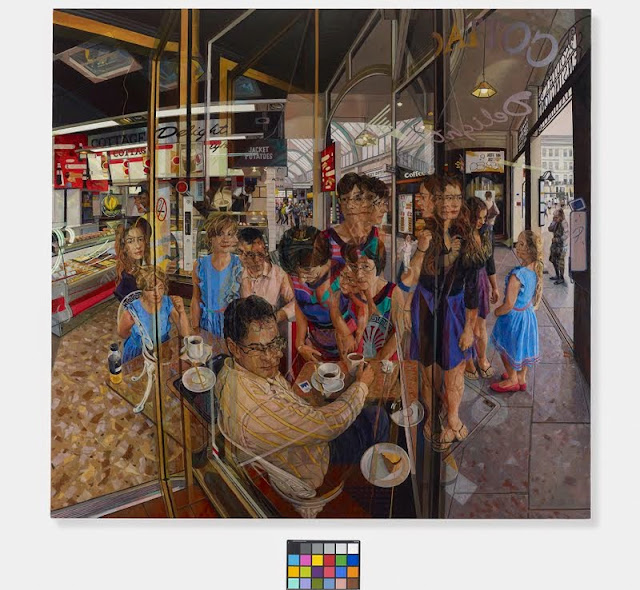 AD: Are the works a compressed panoramic view? Do you mean to show as much information as possible in one painting, and why?

CH: I think to describe them as a view would be to imply that the scene could be experienced in our world, and that it has just been manipulated. This is not the case. They are not compressed, nor are they panoramic, because they have been invented. I start with some information, not a known view, though the painting might end up being long to take the eye into various different spaces across the canvas. But I am just as likely to fold space, as in “Les Souvenirs du cafe Anglais” (2014). The structure of this is like a concertina, where the viewer is both inside and outside the cafe.

There is a lot going on in all my paintings. That entails information, but also many different pictorial events. I am not interested in the endless outpouring of detail which is often found in hyper-realist painting. When I think about detail in painting, it is the attention to the specifics of painting, such as the quality of the painted edge, or the subtle shifts in tone, or exciting juxtapositions of colour. This is what interests me, and I sometimes think about this as defining maximal painting. As to why; I suppose I want to make paintings that are beyond what I can imagine. Most contemporary painting is very simple, and easy to accomplish. I want to be ambitious and surprise myself. Each day in the studio is an adventure. I have no idea what I am going to do, and much of what I do gets scraped off or painted over. But that’s fine. Gradually we can still inch painting forward if we believe this is possible. 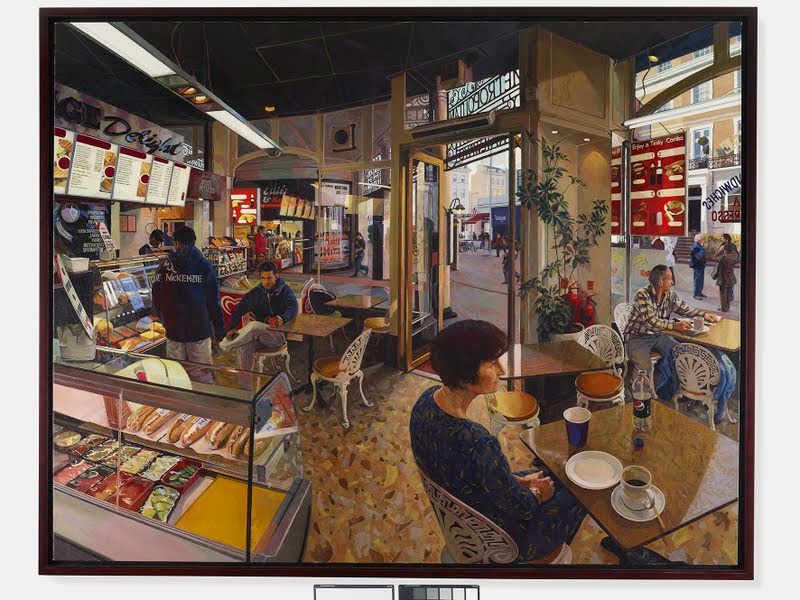 AD: Do you have any future exhibitions planned?

CH: The “Reality” show, in which I have two paintings, is touring to the Walker Art Gallery in Liverpool this summer and is on through to November. It is an excellent exhibition of the best British figurative painters from the past 50 years.

AD: Thank you and good luck!