“To have “style”, for me, means to stop surprising people” – an interview with Pravdoliub Ivanov 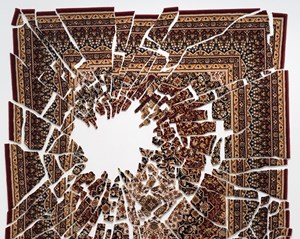 Pravdoliub Ivanov is a Bulgarian artist who confronts the creative process and enjoys not only the resulting material, but also the relations which arise with its creation and its perception by the public. The clashing of views, innovative approaches, the breaking of stereotypes - this is what constitutes the essence of the artist’s work. When confronted with the installations of Pravdoliub the world turns upside down, and the usual conventional balance is distorted.

Pravdoliub Ivanov is a Bulgarian artist who confronts the creative process and enjoys not only the resulting material, but also the relations which arise with its creation and its perception by the public. The clashing of views, innovative approaches, the breaking of stereotypes - this is what constitutes the essence of the artist’s work. When confronted with the installations of Pravdoliub the world turns upside down, and the usual conventional balance is distorted. Using a variety of materials in his works, ranging from the silk ribbons used for military orders and medals, and including cheese, plasters, plates, school desks and chairs (from his piece "Pessimism No More"), Pravdo often combines the most unexpected substances and forces the viewer to let go of firm ground and enjoy the unpredictable. Confronting and questioning the viewer is Pravdoliub’s credo. Pravdoliub talks with Artdependence Magazine about his creative process and the ideas behind his artworks.

Artdependence Magazine: Does your work have a message and, if so, what would you say this message is?

Pravdoliub Ivanov: Well, I can’t say that there is one certain, general message in my works. I am quite often triggered by different political, social, or domestic issues. My ideas are a kind of a crossing point between daily life and fantasy - though I try to create works that belong to neither. Many of my installations are temporary. This is part of my belief that the value is not in the art work itself but rather in the relations it generates.

AD: How would you define your style? How do you feel about the diversity of media and themes you devote yourself to?

PI: I don’t know, I thought “style” is something we left behind in 19th century. To have “style”, for me, means to stop surprising people…and yourself. I don’t wish to have style, but I like it when people tell me – we saw something crazy in the city today, it looked like your work.

AD: One of your latest works, “The Life of Others is Somehow Easier”, 2014 (indoor version), presents a real dog house hanging from a gallery wall. Can you tell us a bit more about it?

PI: I initially did that as an outdoor project in 2005 - I anonymously hung up 5 big dog houses high up on the trees in a small public park in Regensburg. Local people were anxious, wondering what kind of birds are coming to their city. Years later I made an indoor version in a gallery space, using a real second-hand dog house I bought from a village near Sofia. The title is like a clue for understanding the work. In Bulgarian (and may be in other languages too), we have expressions like “dog life” - for tough, unpleasant, heavy life, and “live like a bird” – for an easy going and stress-free life. So, I decided to mix them up. 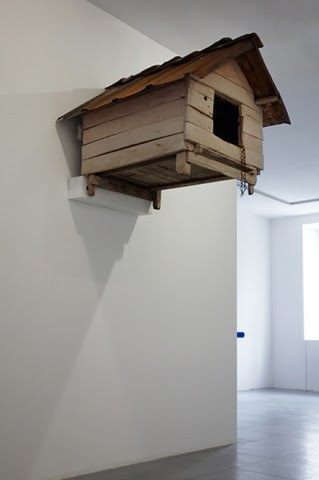 The Life of Others is Somehow Easier, 2014 (indoor version), installation view, 90 x 100 x 125 cm. Courtesy of the artist and Le Guern Gallery, Warsaw

AD: There are also several works where you play with carpets. For me, carpets (especially the ones hanging on the wall, in a Persian style) have a lot of reference to the communist past of Eastern Europe. People used to decorate walls with carpets, using them also for noise prevention and heat insulation. What role do the carpets play in your body of work?

PI: I have couple of works with carpets. I haven’t seen Persian carpets on the walls in Bulgaria, but many homes still have them on the floor. My early work, Confusion (2002), where I placed a carpet as if it was inserted under the wall of a gallery, was playing with the conflict between domestic and institutional, between life and art. My newest works using carpets are dealing with the object of a carpet as a material idiom for East: slow-made, symmetry, comfort, and tradition. All of that confronted with the sudden, painful, disruptive, angry “ornaments” of a broken window. My idea for that juxtaposition was triggered by the revolutions in the Middle East and Africa and their developments. From that impulse I created three works that I consider to be quite major: Ornaments of Endurance (2011), Fairy-tale Device Crashed (2013), and Wrinkles of Modernity (2015). Anyway, it’s hard to get to the political issue looking at these three works, as I don’t like to create works functioning as political slogans, but rather I prefer them to be deeper and more complex, sometimes even misleading. 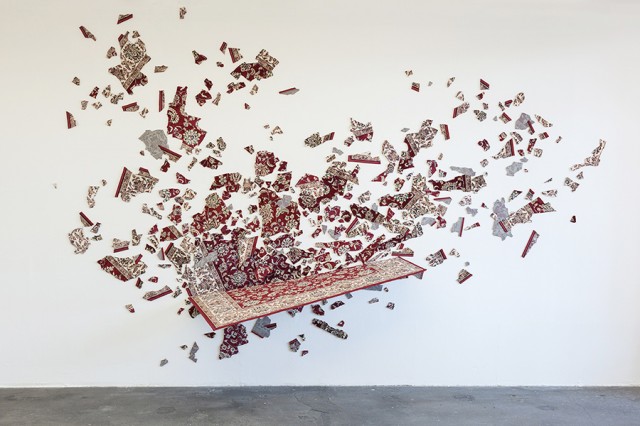 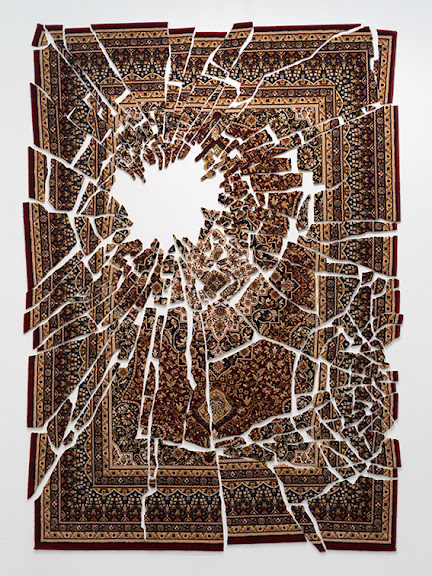 AD: Do you think that art should be explained or interpreted by curators, critics or even the by artist himself – or, do you think that it is up to the audience to find its own clues to “solve” the art?

PI: I like insightful texts and explanations by critics and curators. These texts help not only the public, but also the artists. Well, sometimes I “fight” with critics for the “correct” interpretation, but usually they win. However, once you are exposed, nothing can protect your work from interpretations. That is an open process I often enjoy. However, the work should strike you first, in order to lead to interest reading-interpretations.

AD: In general, how do ideas come to you?

PI: I think I already answered partially to that question. No one knows wherefrom ideas come. It could appear from all that is around me, ordinary and extraordinary alike. From the absurdities of life, from conflicts, from fears or hopes…and the ideas never come “in general”, they come “in particular”. But sometimes there is long period, between an idea and the final, realized work. Some ideas can remain for years like draft drawings before they come out. For example, my gallerist Sariev recently noticed a draft in my archive from 1997 and asked me to realize it for Art International Istanbul 2015. 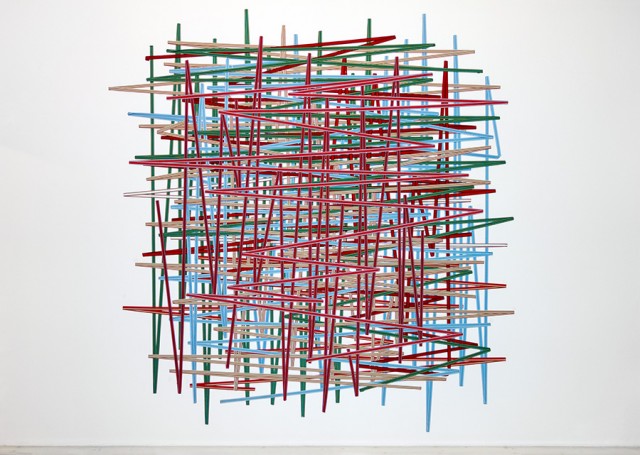 AD: Which are your favorite works, figures, movements from classic or modern art? What contemporary artists do you follow?

PI: Well, I have been influenced by many artists and I admire even more. It is not possible to record them all. But, I try not to follow a certain artist. Aside from the ultimate - Duchamp, I have been influenced by artists like Richard Wentworth. A few years ago, when I visited his lecture and I presented myself, I shared with him that his works had had a great impact on my early career, providing me with much inspiration. He answered, with his lovely sense of humor: Oh, really, I am so sorry. Please, excuse me for that.

AD: If you could only leave behind one art piece you created, which would it be, and why?

PI: Hm, tricky question. If I could choose, I would have to stop working. 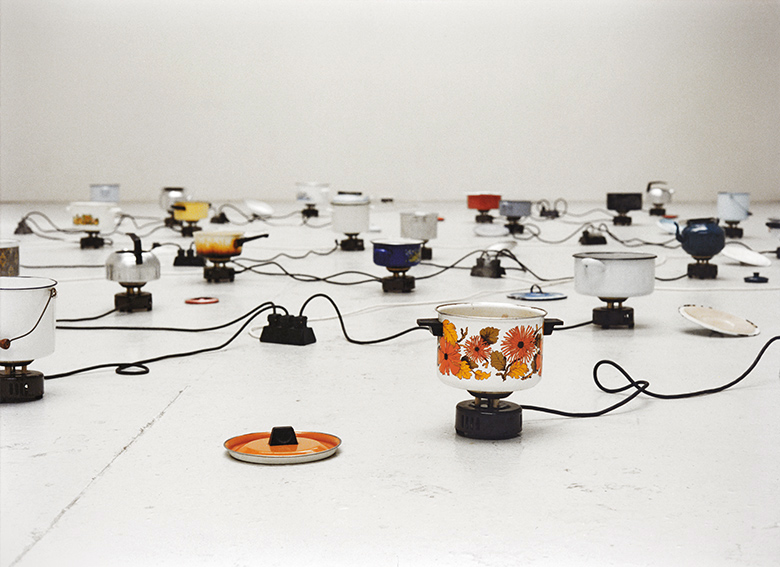 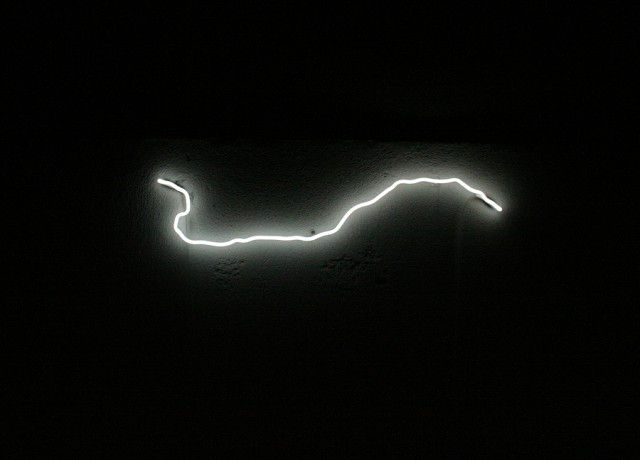 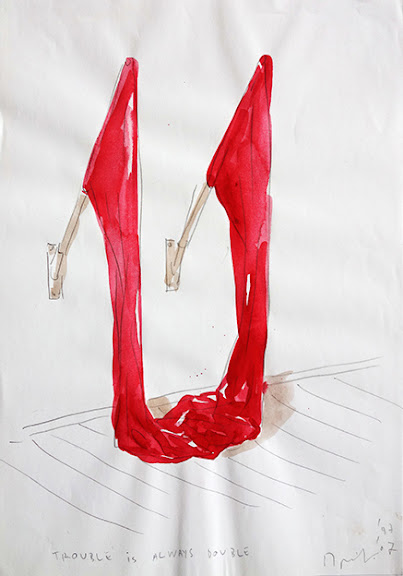 There is Certain Comfort in Abstraction, 2014, object, site-specific project, painted metal. 237 x 15 x 50 cm. Courtesy the artist and Gallery Le Guern, Warsaw
By Anna Savitskaya
Anna is a graduate of Moscow’s Photo Academy, with a previous background in intellectual property rights. In 2012 she founded the company Perspectiva Art, dealing in art consultancy, curatorship, and the coordination of exhibitions. During the bilateral year between Russia and The Netherlands in 2013, Perspectiva Art organized a tour for a Dutch artist across Russia, as well as putting together several exhibitions in the Netherlands, curated by Anna. Since October 2014, Anna has taken an active role in the development and management of ArtDependence Magazine. Anna interviews curators and artists, in addition to reviewing books and events, and collaborating with museums and art fairs.