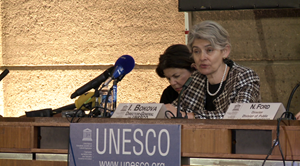 On Thursday February 26th the world watched with horror the video footage showing the destruction of history at the hands of the extremist Islamic rebel group ISIS.

The destroyed statues and artefacts, dating back thousands of years to the Assyrian and Akkadian empires, are considered by ISIS militants to be examples of idolatry that do not correspond to their Islamic monotheist belief.

Artdependence Magazine contacted the UNESCO press office to enquire over the organizations’ response to this most recent tragedy, among the many that have taken place in the region since the Arab Spring in 2011.

We have learned that the UN’s cultural organization seeks to mobilize the international community with the support of the UN’s Director General Ban Ki Moon, who is expected to call for an emergency Security Council meeting to address the situation.

Already a UN resolution has been put in place, as of last January 12th, which seeks to avoid the illegal trafficking of cultural artefacts from the Middle East by the hands of ISIS and other groups associated with Al-Qaida.

Beyond the destruction of these artefacts as a form of asserting political, cultural and religious dominance, these extremist groups are known to engage in the black-market trafficking of historical items to further fund their terrorist activities. The aforementioned resolution seeks to diminish the chances of profiteering from the looting of heritage sites – a criminal activity that UNESCO qualifies as a war crime. As such, UNESCO director Irina Bokova is seeking to take the measure further by indicting ISIS through the International Criminal Court in the Hague.

On the ground, the UN organization is working in close cooperation with Lebanon and Turkey, along with the World Customs Organization, to detect and avert the handling and trading of these items. Furthermore, large auction houses such as Christie’s and Sotheby’s have been asked to be on the lookout for the stolen artefacts.

UNESCO has also communicated the show of support from many countries in the EU, alongside others such as Japan and Sweden, in combating these activities.

If it is any consolation after such as tragedy, the UNESCO press office did confirm that several of the objects destroyed were replicas. They claimed that many original objects remained undamaged, stored in an undisclosed location, where they will continue to be stored for the sake of preserving a valuable cultural heritage belonging not only to the region, but to the entire world.

Check the video to hear more from UNESCO Director General Irina Bokova on the relationship between cultural preservation and security measures: